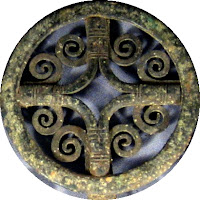 I have written about many Chinese mystery objects, with the answer revealed in the following post. However, some of my Chinese items are “ultimate” mystery objects—I cannot supply the answer because no one has any idea of what they are.

These may be common objects, and after publishing I will see them everywhere, but the dealers I have bought them from could supply no information, no one else seemed to know, and intensive internet searches turned up nothing. Perhaps the public scrutiny involved in posting them will yield a clue, and the mystery will at length be solved.

Today’s example is a set of three round bronze grilles, each about seven inches (18 centimeters) in diameter. They are of the same basic pattern, but have increasing complexity of ornamentation.

The first one has the simplest design. There is an outer ring, with four brackets that bend down to support the inner design. This consists of two more concentric rings. The four outer brackets are split into double volutes or spirals, filling part of the open space. The middle ring has four bars soldered to it in a cross pattern, which support the inner ring. A large, ribbed boss is at the very center.

The second grille starts out like the first. However, the four struts that support the inner circle do not meet in the center, but like the outer struts are split into double volutes. Since these eight spirals occupy the smaller inner spaces, they immediately give a much more ornate and dense effect.

On top of what is left of the inner supports there is attached a cross-like structure with banded ends that is split in the middle to form a hollow square space (detail enlarged in top photo). With the inner circle, the whole effect is of a large coin pattern, similar to those on the pewter offering stand. The round cash coin with a square hole in the center is a very auspicious Chinese design.

The final grille is the most elaborate. It is built like the second one, but this time on the flat part of the supports emanating from the middle circle are riveted four bronze bats. These bats are well made, of an openwork design with soldered-on three-dimensional bodies and finely engraved wings. Bats, of course, are another Chinese lucky symbol.

The center coin design is altered slightly. The square hole is larger, and there is no banding on the crosspieces that create the hole. The effect is simpler and more open, perhaps intentionally to avoid a too-crowded look with the addition of the bats.


Their open pattern suggests grilles of some kind, for ventilation, heat, or incense, but I have not seen similar grilles in situ. The lucky symbols incorporated are very common to many Chinese objects, and would not indicate any particular purpose. The supports split into spirals are often seen in Chinese metalwork, but I imagine this technique is found in most societies.

These three grilles somewhat resemble trivets, but the step-down in each one suggests that they were designed to fit into openings. The fact that there are no mounting holes for nails indicates that they likely were set into a flat surface, instead of being mounted vertically into walls. Various stoves, large incense burners, and furnaces for burning spirit money might have had such flat vents built into them. Some incense and money burners are very large, often built of masonry.

However, the boss on the simple design indicates that nothing (such as a kettle) was meant to be placed on these, and the bronze is too thin to support the heat from a stove or furnace, although if not too near the flames, these uses are still possible.

My best guess is that these were meant for a large temple-size incense burner, although that still leaves the mystery of the three designs. They could have been meant for different types of incense (or denominations of spirit money), or they could have been arranged in a way that made visual sense.

I have three of these, but of course the original number could have been much greater—they could even have encircled a building or large object with rows of increasingly complex designs. Conversely, these could have been sample products, to allow the consumer to choose the most pleasing design.

I imagine that these would look good mounted against a white wall, to highlight the designs. If you have seen similar objects before, or can guess a more probable use for them, please let me know in the comments. Also let me know which one is your favorite: the simple model, the intermediate design with the extra volutes, or the most complex design with the bats.


Some adventures are carefully planned; others just fall into your lap. The latter method was my introduction to the Murray-Dunn house in Mentor, Ohio. My stepmother Claudia and I were driving down Mentor Avenue, when we noticed a large, fancy and very decrepit old house behind a wall.

We stopped to take a look. Obviously no one could be living in a house in this condition, so we crept a little closer for a better inspection. Suddenly we heard a noise, the front door slowly opened, and an incredibly old man came out and asked if he could help us. We were of course nonplussed, and glad that he was not the type to shoot first and ask questions later. We told him how much we admired the architecture of his house.

He immediately became friendly, and started telling us about the history of the house and the surrounding area. Before he retired, he had a nursery business nearby, and indeed plant nurseries have always been important in Lake County, Ohio, in which Mentor is located. Mr. Dunn graciously invited us into his home to show us around and tell us more about the old days, and so we got our first glimpse of the house’s marvels.

Thus the matter stood for a while, and then Claudia noticed in the paper the sad news that Mr. Dunn had died. Since she has connections in real estate, she was able to get us permission to explore and photograph the house thoroughly.

There were three main areas to inspect: the large house, the old barn/carriage house, and the magnificent yard. Robert Murray, 1814-1896, built the original Greek Revival farmhouse on Mentor Avenue in 1847. Later, his son, William P. Murray, 1854-1918, converted this house into a summer residence in 1898, enlarging the house and grafting on a kind of Arts-and-Crafts architectural style, with a crenellated tower. Helen Murray then maintained the house and farm until the property was sold to Thomas Dunn in 1951.*

Near the house was a simple, semi-Gothic style barn or carriage house with board-and-batten siding, more in style with the original Greek Revival main house. In the carriage house was a classic car from the 1960’s, in virtually mint condition. This was Mr. Dunn’s pride and joy, and he delighted in telling us how it only had a few hundred miles on it, and he only took it out in the summer during good weather for a few short rides.

As imposing as the main house was, the most impressive feature of the Dunn estate was the generous 10-acre park-like yard, filled with magnificent specimens of often unusual trees. One of the Murrays must have been a plant collector, as some of the trees were not native to Ohio. A special part of the house was how each of the rooms was designed to feature a view of the spacious green yard with its large trees.

Here then is a tour of the Murray-Dunn property. Many of the outside shots are in black and white, although I never recall using that kind of film. Apparently there were two photographic excursions; there are small differences noticeable between the black-and-white and color shots of the same features.


Lake County was (and is) the site of many distinctive houses. Claudia and I were lucky to have discovered the Murray-Dunn house, to meet the remarkable Thomas Dunn, and to get the chance to explore the house and take these photos. The timing was extraordinary, because shortly afterwards the house and entire property was razed. The land was sold for a car dealership which eventually closed, and now I understand it is the location of a Target store.

There are no vestiges left of the Murray’s once-grand residence, or of the expansive lifestyle they led in their ostensible castle. I think my greatest regret was to see that beautiful yard destroyed. We all enjoy restored museum properties, but buildings which stand in the way of progress will not wait forever. Visit them at the first opportunity, regardless of their condition. Did you ever visit a house or historic property that is now no longer there to appreciate? Let me know in the comments!

*This history of the house was condensed from information obtained from the Lake County Historical Society.

All photos were taken by, and are copyright of the author.