In Asian cultures, the art of writing has assumed a much greater significance than the simple transmission of texts; calligraphy is regarded as one of the high arts. Many of the Emperors were expert calligraphers, and their writings from centuries ago are still used as models. The ability to write and draw well, and to understand classic examples of calligraphy, became part of the basic equipment of educated people.

A veritable cult grew up around the art of calligraphy, and this soon encompassed the various tools used to produce the scrolls of writing and ink paintings. The scholar’s studio became a place of incredible refinement, and the finest artists and materials were employed to create the related accoutrements. Many of these are museum pieces and out of the range of an ordinary collector, but writing utensils are so integral to Asian culture that it is possible to seek out attractive and unusual items.

To begin with, there are the Four Treasures of the scholar’s table: the writing brush; the ink-stick; the ink-stone; and the paper. Brushes held vertically are used for both writing and painting. Ink comes in solid sticks, which are ground with water on the ink-stone to produce liquid ink. There are in addition many allied items that aid in the production of calligraphy. Some of these will be covered in the future; today’s post concerns paperweights.

Chinese paperweights fall into two categories. The calligraphy type, long and thin, is used to hold down the edges of paper scrolls when displaying or painting on them, while the novelty type can take any shape and so resemble Western examples.  Most of the weights are decorated with Chinese good luck symbols and other traditional emblems.

This leaping fish paperweight above is among my favorite examples of the calligraphy type. The design possesses great vitality, with its swirling waves, golden fish, and rocks or mountains jutting from the water. The empty spaces between the raised elements also allow it to serve as a brush rest. Interestingly, the base metal under the enamel is not brass or bronze, but copper, an unusual metal for Chinese objects.

Calligraphy weights often came in sets, with one engraved design spread over the individual pieces. These three white brass bars are all orphans from various sets. The one with half a deer on it is obviously of a higher class of engraving; it is a pity that its companions have become lost.


These three weights are so handy that they are among the few objects that I have not put away. Their long shape, perfect for holding down curling edges, makes them invaluable for photographing books and paper items.

Another white brass paperweight, this time in the shape of a sword:

Many objects can serve as paperweights, but some are specifically made for the purpose, such as these yuan bao (money ingots) on stands. One is somewhat vintage and the other is new; obviously this design has not changed much over the years. 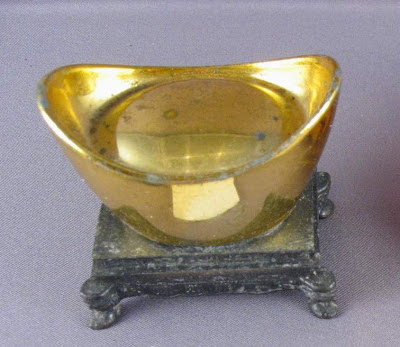 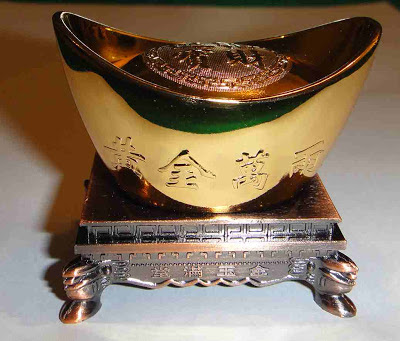 What initially looks like a miniature ship's wheel is an important Buddhist symbol, cast in bronze:


I was powerless to resist this iron lobster:

Paperweights are universal objects which transcend many boundaries of time and place. The fact they are so easily improvised using any ordinary rock or solid object has the ironic effect of making some people seek ever more lavish and costly ones. They are fun to collect because they are small, yet heavy and solid in the hand, exhibit great variety, and additionally are still useful for their original purpose. Do you have a favorite paperweight or object that you use as one, such as a stone or fossil?

All objects and photographs from the collection of the author.
Posted by Parnassus at 1:12 PM 29 comments:

Taiwan has many traditional tourist sites, loaded with beautiful scenery, monuments, and architecture, which reflect Taiwan's long and varied history. One of its most interest sites, Cihu, is remarkable for a different quality, its sheer air of unreality.

Cihu is a short drive from Taipei City and the Taoyuan Airport, and well repays a visit, but first you must understand a little of the history of Taiwan and Chiang Kai-Shek. When the Chinese Communists defeated the Nationalists in 1949, General Chiang brought the Nationalist government to Taiwan, where he served as President until his death in 1975.

As a result of his importance and long reign, statues of him were put up everywhere, including virtually every park, school and public building. However, in recent years, Chiang Kai-Shek has become somewhat of a political football, and many of these statues were taken down.

That is where Cihu comes in. Cihu was Chiang's home in Taiwan, and in fact his former house has become his mausoleum. There was a small lake and park attached to the house, and when the Chiang statues were taken down elsewhere in Taiwan, Cihu offered to provide a home for them.

The result was the Cihu Memorial Statue Park (慈湖紀念雕塑公園), perhaps the world’s most bizarre memorial, with hundreds of Chiang Kai-Shek statues and busts edging the lake and scattered around the grounds. These statues are of many materials and different poses, and are mounted singly and in surreal conversational groups, all of the same person.

You will first want to visit the Chiang Mausoleum. People line up and wait patiently to file one by one past his sarcophagus in his former living room, where visitors pay their respects by bowing as they pass by. It is a solemn moment, and you wonder what is passing through the minds of the older people who remember Chiang, perhaps even fought with him, and whose lives were greatly influenced by Chiang and the period of Chinese history which he represents.

These serious thoughts are replaced by those of amazement as you pass on to the Statue Park. Rather than attempt to describe them, I’ll let the statues speak for themselves:

The designers of the park did a very good job. They did not crowd the statues or have so many that it would become overwhelming or like visiting a storage facility. In spite of the surreal aspect, the park retains a pleasant and intimate quality.


While these statues have been removed from many sites around Taiwan, there has been no major effort to obliterate Chiang’s memory. It is true that the Chiang Kai-Shek Airport was officially renamed the Taoyuan International Airport, and several large-scale memorials were dismantled, including the monumental statue in the National Palace Museum.

However, the Chiang Kai-Shek Memorial Plaza in Taipei is unaltered, and with its concert and exhibition halls, gardens, and spacious plaza, is an important place for both locals and tourists. And there are still many local statues and monuments scattered about. While some sites have been shorn of their Chiang statues, perhaps the mass display at Cihu provides an even stronger focus for remembering Chiang Kai-Shek and reflecting on his life and accomplishments.

What is the most bizarre tourist site that you have come across? Please let me know what you think of Cihu park—whether you find it insane or an apt memorial.


(All photos except Chiang’s sarcophagus taken by the author.)
Posted by Parnassus at 10:08 AM 27 comments:

Email ThisBlogThis!Share to TwitterShare to FacebookShare to Pinterest
Labels: Taiwan

The New England Hurricane of 1938

The recent devastations of Hurricane Sandy have prompted comparison with other great storms of the past, including the Hurricane of 1938, one of the fiercest storms to hit New England.

The 1938 hurricane is still legendary, and not long ago I acquired some original photographs of the hurricane's damage along the Connecticut coast.

It is difficult to compare the impact of different storms, because the damage from hurricanes is spread over so wide an area, and some localities are hit much harder than others, not to mention that the country has been built up in the last seventy-odd years. Furthermore, one can't always tell from photographs the true extent of the damage. For example, loss of life, underground flooding, or the historic value of destroyed property may not be evident in the pictures.

Here is a selection of photographs that indicate the force of the wind and the water back in 1938: