Spring has arrived officially, and while Taiwan does display an increase in blossoms, I particularly miss the dramatic changeover typical of more temperate zones. Starting with the maple sugaring season, the winter woods and scenery come back to life with delicate spring flowers and new green leaves.

In my collection of nineteenth-century photographs is this idyllic spring scene of an early American farm house in Worcester, Massachusetts. We see the small wooden house located close to the road or drive, with a large barn visible farther on. The house seems to be painted white, but the corner boards and sills appear to be a darker, contrasting color. 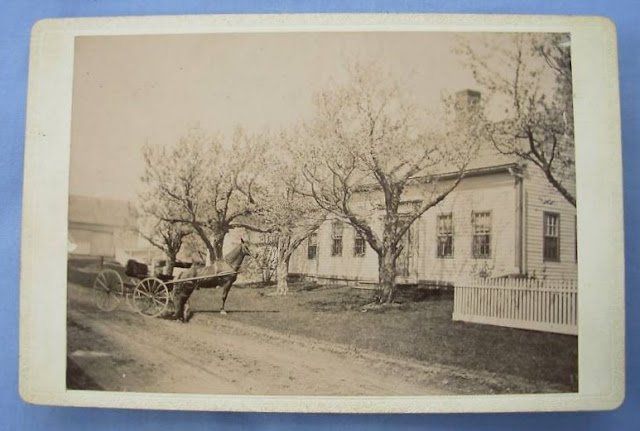 There is a wing of the house to the viewer's left, and on the right a white picket fence enclosing a side yard. Dimly seen is an elaborate front door with architrave and sidelights, but one wonders how much that classical entrance was used, for there is no path to the door, and the grass seems undisturbed. 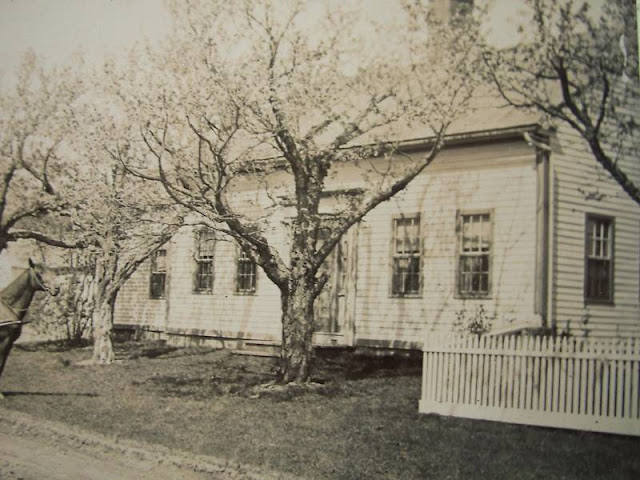 Perhaps the most appealing element of the picture, and what establishes the Spring season, is the row of blossoming apple trees in front of the house. While we can't know for sure what kind they are, Baldwin, Roxbury Russet, and Westfield Seek-No-Further are all famous varieties that originated in Massachusetts, and that were well established by the time this photo was taken.

Baldwin, discovered in Wilmington, Massachusetts around 1740, was one of the most important American apples in its day. As late as 1915, according to the book North American Apples, Baldwin was the leading commercial variety, with 13.4% of the crop. Southmeadow Fruit Gardens more recently sold “this variety for those with childhood memories of this large, red winter apple with its hard, crisp, juicy flesh so long cherished for eating out of hand, and apple pie.”

Roxbury Russet was one of those connoisseur's apples that was grown for its consummate flavor, not for perfection of appearance. Roxbury apples, often with patches of brown russeting over green-yellow skin, illustrate the axiom that the worse fruit looks, the better it often tastes.

Westfield Seek-No-Further was another old-time favorite with a high eating quality. It also has the best name of any variety, taking you back to an era when the art of naming apples was honed to a high skill.

There also exists an old apple variety called Worcester Pearmain, but it refers to the Worcester in England, not Massachusetts, and so is not a real candidate for the trees in this photograph. However, these color plates of Worcester Pearmain were so beautiful that I can't resist adding them:


This old cabinet photo of a Massachusetts farm vividly brings to life a favorite daydream of having a house in the country with some acreage. In the picture, at least, it is a beautiful day, everything on the farm is in good shape and freshly painted, and the carriage is waiting to take us out for a ride to enjoy the beautiful Spring weather.

(Photo of farm from author's collection, all other illustrations as labeled.)