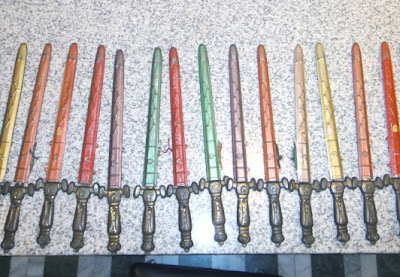 Lately my eyes have been starved for color, so I decided to revisit this group of vintage tin swords. Originally, I was just going to obtain one or two, but somehow it was not difficult to persuade myself to acquire the entire lot. There is something about old objects in mass which makes them more appealing—that is the collecting instinct.
The fantastic quality of these swords is in the colors of the scabbards: green, red, mauve, orange, yellow, and champagne, all beautifully soft and muted, yet infused with life from the metal beneath.

The scabbards are further embellished with a primitive dot-and-dash design, and embossed with a crescent and circle symbol. There are two lugs for attaching a silk hanger, although few of these are extant. Finally, there is a gold label identifying the swords as the product of the Hong Dong (宏東)  or Great Eastern toy company.

The blades are strengthened by a central groove, which I just learned is also called a fuller. The blades are separately inserted into the hilts. The cross-guards on the hilts repeat the crescent-and-circle motif, and some of the pommels still retain their original cotton tassels.

I still haven’t decided how to display these swords. The Victorians approved of weapon displays in dining rooms, libraries, and entry halls, yet this doesn't seem exactly friendly, even given their bright hues.
Looking over my shelves for information on old swords, I coincidentally found Arms and Armour by Charles Boutell, presumably not the same person as C. Boutelle, the boarding-school troublemaker, although you never know, as this book was published in 1907.

Swords as toys do bring up some moral issues. Some people disapprove of military toys, while others worry that they foster gender stereotypes, despite the image of Joan of Arc. I don't think that molding guns out of pink plastic for girls, which I have seen, is the best answer to this dilemma. 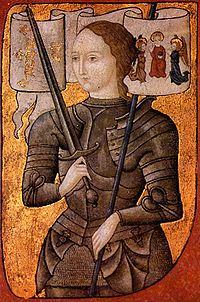 Toy swords are still very popular in Taiwan. Plastic ones are readily available, and even wooden ones are frequently seen, although I have not seen new tin ones. They are as much fun as ever—we all have a little Zorro in ourselves.

A Cryptic Message from Old Yale

When I found this postcard depicting Yale’s Alumni Hall, I was intrigued by its odd inscription, “The House of Terror”. This vivid comment makes us wonder just what was so horrific about this building.


We conjure up mental images of recalcitrant alumni being forced finally to make that donation, through means too awful to name aloud. Supporting this, we can see a couple of what look like Durfee residents lurking behind an elm tree in obvious fear of the building.

Here is more evidence of the nefarious nature of Alumni Hall’s activities: after its demolition, the towers were saved and re-erected by Yale’s notorious Skull and Bones Society. Hidden in the rear courtyard of the Skull and Bones Tomb, who knows what dark rituals are yet performed there.

Alumni Hall was built in 1853, designed by one of the great architects of the day, Alexander Jackson Davis. Two of his iconic buildings are the New York Customs House, the emblem of Wall Street, and the Gothic Revival masterpiece Lyndhurst in Tarrytown, New York. The present photo of Alumni Hall was copyright in 1901, and the building was razed in 1911 to build the still-standing Wright Hall.


Although its symmetry makes it less romantic than some Gothic Revival structures, we can see Alumni Hall’s relation to other Davis buildings. The Wadsworth Atheneum in Hartford has a similar entry pavilion flanked by towers, and Alumni Hall’s octagonal crenellated towers themselves are echoed in Davis’ design for Tudor Villa in New Rochelle, New York.


With all this in mind, I set out to unravel the mystery. I thought perhaps the caption was once a catch-phrase, and tried to look it up, but unfortunately “House of Terror” now has a much darker and more literal meaning than it ever could have then. The kind of terrorism which today has become prevalent underscores the innocence of that day over one hundred years ago.

Some further digging reveals the probable source of the writer’s trepidation. It turns out that Alumni Hall was basically one large room. Written examinations were an innovation in the 1850’s, and term exams were held in Alumni Hall. In fact, some of the original exam tables are still to be seen in the Yale Art Gallery.

Even in the early twentieth century, the typical student at Yale was not always the brilliant scholar type, and we can finally see this photo of Alumni Hall through the anonymous writer’s eyes.

By 1911, its function was largely passé, with more classroom buildings present and likely changes in the exams themselves. Still, it is too bad that no use could be found to preserve this masterpiece by one of the period's and New Haven's most important architects.
Posted by Parnassus at 1:32 PM 16 comments:

I just received a shipment of five hundred books from America to Taiwan. This is an exciting event, giving that child-in-the-candy-store feeling that I want to read this one first, no this one, no this one.
A. Edward Newton wrote about the difficulties of sneaking new books into the home, past his suspicious wife. A favorite trick was to add them to the stack on his nightstand, as though he had just taken them from the shelves, and then later redistribute them.
Usually one just acquires a few books at a time, or perhaps an arm- or box-load, but an influx on this scale changes all the rules. This many books required the purchase of new bookshelves, in turn necessitating the rearrangement of my entire apartment.
If you mix new with existing books, the new ones tend to disappear into the background, and you lose the monolithic quality of your new acquisition. On the other hand, sequestering the new books requires a double organization system, and as you read them you constantly have to reorganize the shelves.


A few titles caught my eye as I was unpacking them. Court Satires of the Restoration sounds right up my alley, and will go nicely with the Complete Works of William Congreve and of Thomas Shadwell. I have never read a novel by John Masefield, so I am looking forward to his Jim Davis.
To me, the great humorists (let me know whom I have forgotten) are Benchley, Nash, Wodehouse, Perelman and Patrick McManus. The latter is my perhaps my favorite living writer; I dote on his essays, and now I can try out his regular novel, The Double Jack Murders.
Since I bought most of these sight-unseen, a couple turned out to be other than I thought. I am a sucker for any books on pomology or fruit-growing, and I thought that Apples I have Eaten would be filled with Bunyard-like commentary. What I received was a small volume of unaccompanied photos, only the miniscule introduction assuring us, “They were really tasty.”
Winifred Carter’s Dr. Johnson’s ‘Dear Mistress’ turned out to be a historical novel set in the Eighteenth century. Unfortunately, Carter’s style owes more to Elinor Glyn than it does to Dr. Johnson. Here is a sample of her immortal prose:
Mrs. Salusbury’s voice was almost shrill and her old eyes flashed fire. “I know you want it to squander on the trollop from Drury Lane. Neither shall you have any more of my fine things for such a purpose.”
John Salusbury frowned impatiently. “Really, Mama, I don’t lie. If I wanted money for the divine Kitty Clive I should say so.”
The whole Johnsonian crowd is here—Boswell, Garrick, Reynolds. She must have done her homework, because not only is Mrs. Thrale present, but Mr. Thrale also. Oh, well. 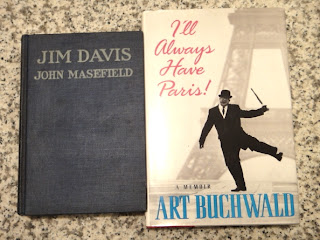 A pleasant surprise was Art Buchwald’s I’ll Always Have Paris. I was expecting just a light read, but the jacket avers these are memoirs of “the dazzling Paris of the late 1940’s and the 1950’s.” I have often read about the mythic Paris of the 1920’s, and so am looking forward to extending my Parisian timetable.
Five hundred is a lot of books, but they will have to suffice for a while. Although I have been accumulating these for two years, and worked hard to ship them, I am now experiencing that delightful Ali Baba moment of wonderful treasures suddenly revealed.

They Always Pick on Me, or a Week in Boarding School, 1878

Sometimes an old document of no great importance gives us a glimpse into another world. Here is a list of demerits earned in 1878 by a student in boarding school named C. Boutelle. I can’t tell you his first name, or what school he attended, or how this report was used—speculation will have to suffice.
To save your eyes, I have transcribed this, adding a few comments along the way:

I find it interesting that impertinence (4 demerits) is a worse crime than disruption (1 demerit). Disruption is just a display of animal spirits, so does not reflect on the teacher or the school, but impertinence is insubordination, and shows the awareness and transgression of levels of power.
Modern schools seem to find such nitpicking unnecessary. Phillips Exeter indicated that small offenses are not reported or tallied, because students are on their honor to behave well. Other schools such as Western Reserve Academy impose some sort of detention or study hall after three demerits, but stress that serious offenders on the order of Mr. Boutelle are virtually non-existent.
Going AWOL is now a much more serious and scary offence, and would go right to the top authorities to deal with. Most boarding schools don’t have this problem, because students enjoy school life and are cooperative about the rules. Modern technology and security further help to curb nocturnal wanderings.
C. Boutelle as a boarding-school student conjures up images of P.G. Wodehouse’s early school stories, of Mike and Psmith at Sedleigh. Psmith is too clever for his own good, and feels the rules are not meant for him, while Mike, oblivious of the real world, bumbles or is misled into trouble.
Before you dismiss C. Boutelle as a total goofball, consider his behavior in tandem with his grade report: