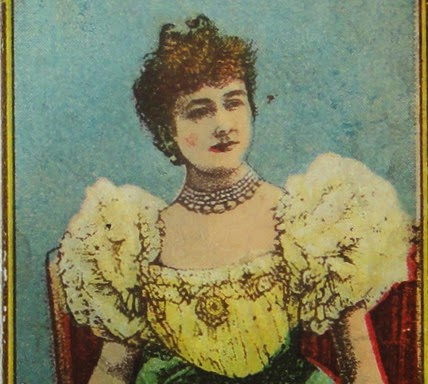 My last trip to Cleveland, I was going through a box of old photographs and came across the following dramatic portrait, obviously a singer or actress. Although the features seemed familiar, I couldn't recall whose portrait this was, so I looked at the back, only to be confronted with a blank expanse.

The identity was known when I obtained it, but nothing was written on this large photo, which was likewise dissociated from any receipts or catalog entries. In other words, an orphan photograph. However, luck was watching out for me, for later a small album yielded this late 19th century trade card of singer Sigrid Arnoldson, advertising Lorillard tobacco: 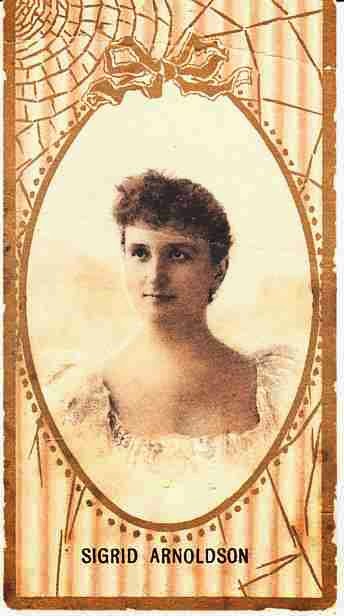 This certainly looked like the photo, and now that I had a name it was a matter of minutes to look on the internet and confirm the identification with other Arnoldson photos from the same session, such as this one on the delcampe.net website. 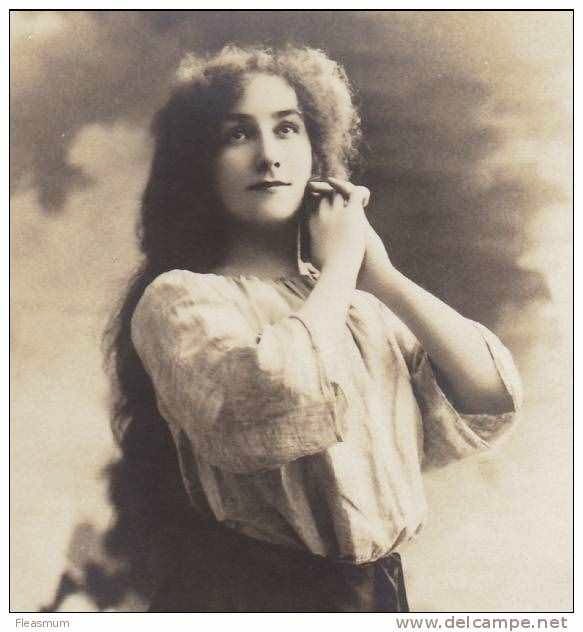 Sigrid Arnoldson, a famous Swedish singer with an international career who lived from 1861 to 1943, was an important part of the music scene in the late Nineteenth century. In a manner reminiscent of Adelina Patti, Arnoldson combined the high status of classical singers with the relentless merchandising of the period to enter the realm of popular culture. Her face and name appear often in relics of the period, frequently in sets of trade cards issued by tobacco and other companies.

Luckily, Arnoldson lived into the era of early phonograph recordings, so her voice was preserved for the future.  That same visit, I opened a box of old 78-RPM records stored in a cabinet, and miraculously there was Arnoldson's 1906 Berlin rendition of the Swiss Echo Song, a popular Victorian display piece. (You may hear this recording, although not from my copy, on Youtube.) 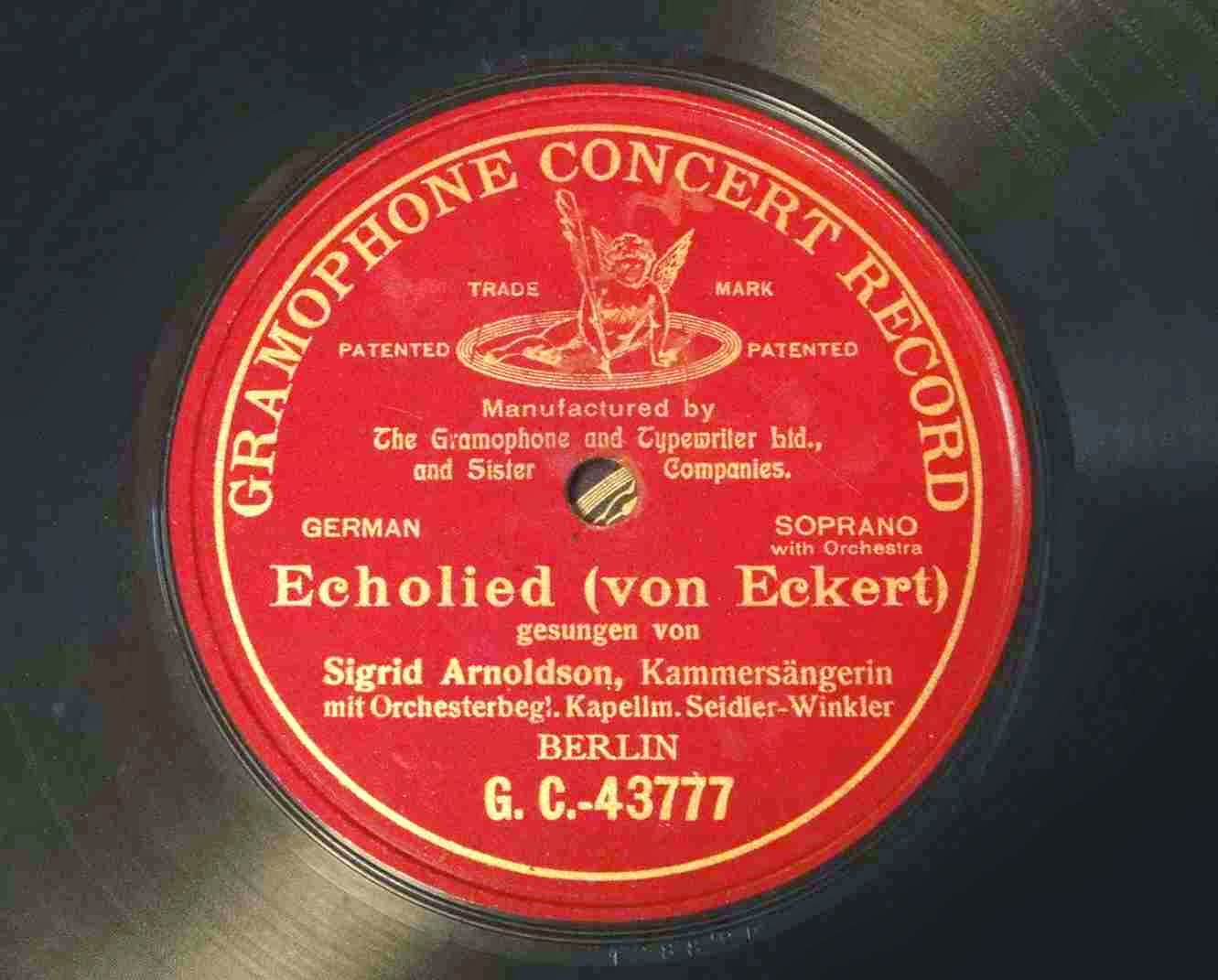 The important lesson here is that we are the custodians of the objects we collect, and there is no excuse to allow identifying information to be lost. Names and locations should be written on the backs of photographs with pencil (but please avoid ink or felt tips, which over the years will bleed through).

Arnoldson's birthday is March 20th, which makes this an especially appropriate time to review her story. I must have had a premonition that I would one day be called on to celebrate her birthday: I was all prepared with this c.1890 box of Sigrid Arnoldson Birthday Candles! That is the pleasure of collecting—once someone like Arnoldson registers on your mental radar, locating an insignificant object like these candles becomes an occasion of great excitement and amusement.


The spirit of Sigrid Arnoldson must have been at my elbow last summer, protecting her image from neglect. Although most of my things are packed away in deep storage, it seems that every time I opened a box I found an object related to her. A few days before I left, one last very beautiful portrait from 1894 virtually materialized in a folder of architectural photographs. She looks very relaxed now that I have labeled her picture, and order has been restored!


All photographs and original items, except as noted, property of the author.
Posted by Parnassus at 1:44 PM 26 comments:

(Note: Lots of colorful photos, so please be patient while they load.)


Lantern Festival comes at the end of Chinese New Year, a time when handmade lanterns in incredible shapes are built to celebrate the special themes for the year, or for that matter any subject, charming or strange, that comes into the maker's head. (I last reported on Lantern Festival during Dragon Year.)

The way it works is that different schools, groups, and even companies enter their lanterns in various categories, and at some point winners are chosen. This post has only still photos, but many of the lanterns were mechanized, having various moving parts, and sometimes even steam issuing forth.

As you leaf through these photos, note your favorites, and let me know at the end. It is a difficult choice; even these here were weeded out with difficulty from over five hundred photographs! (How could we ever have existed before digital cameras?) 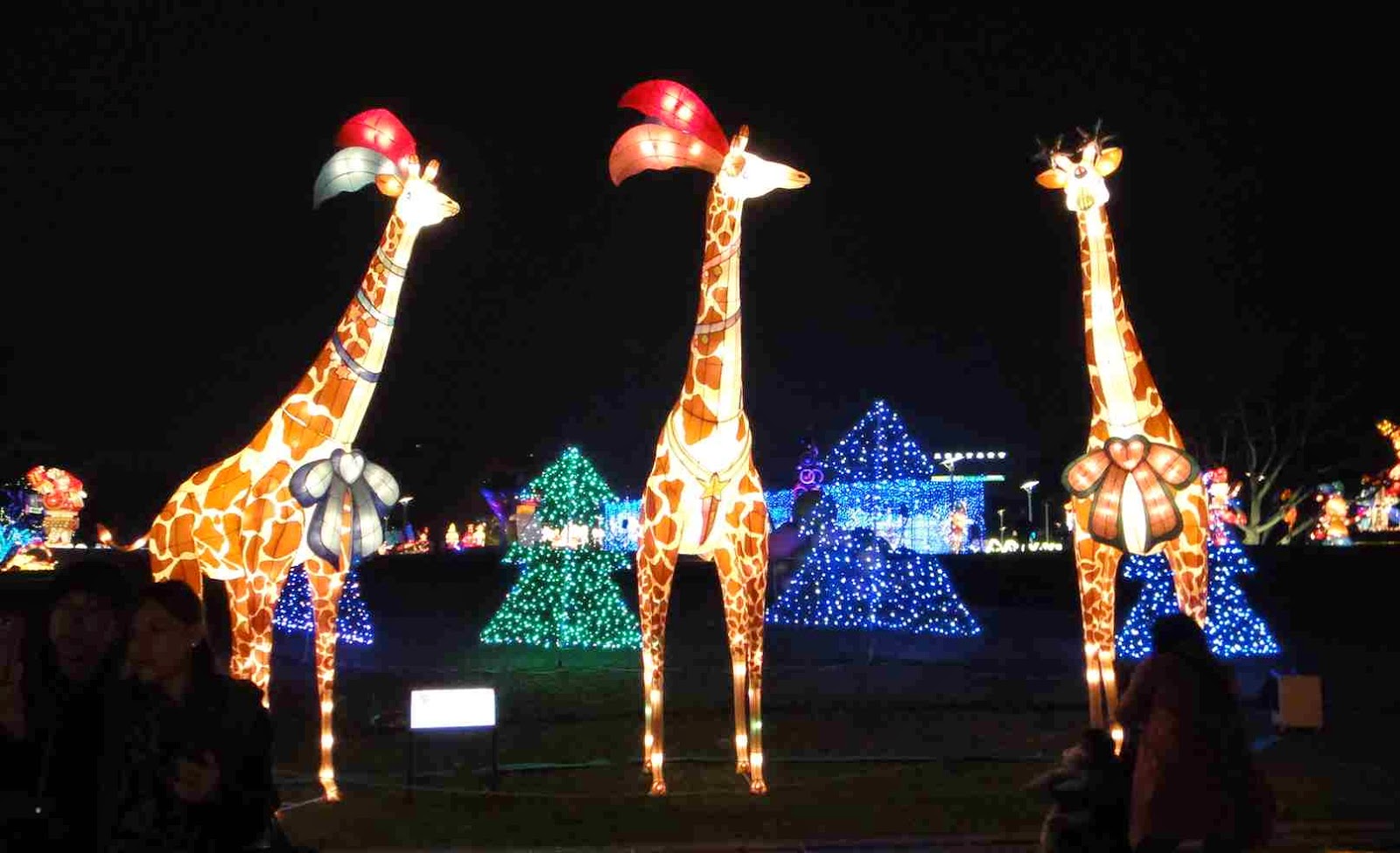 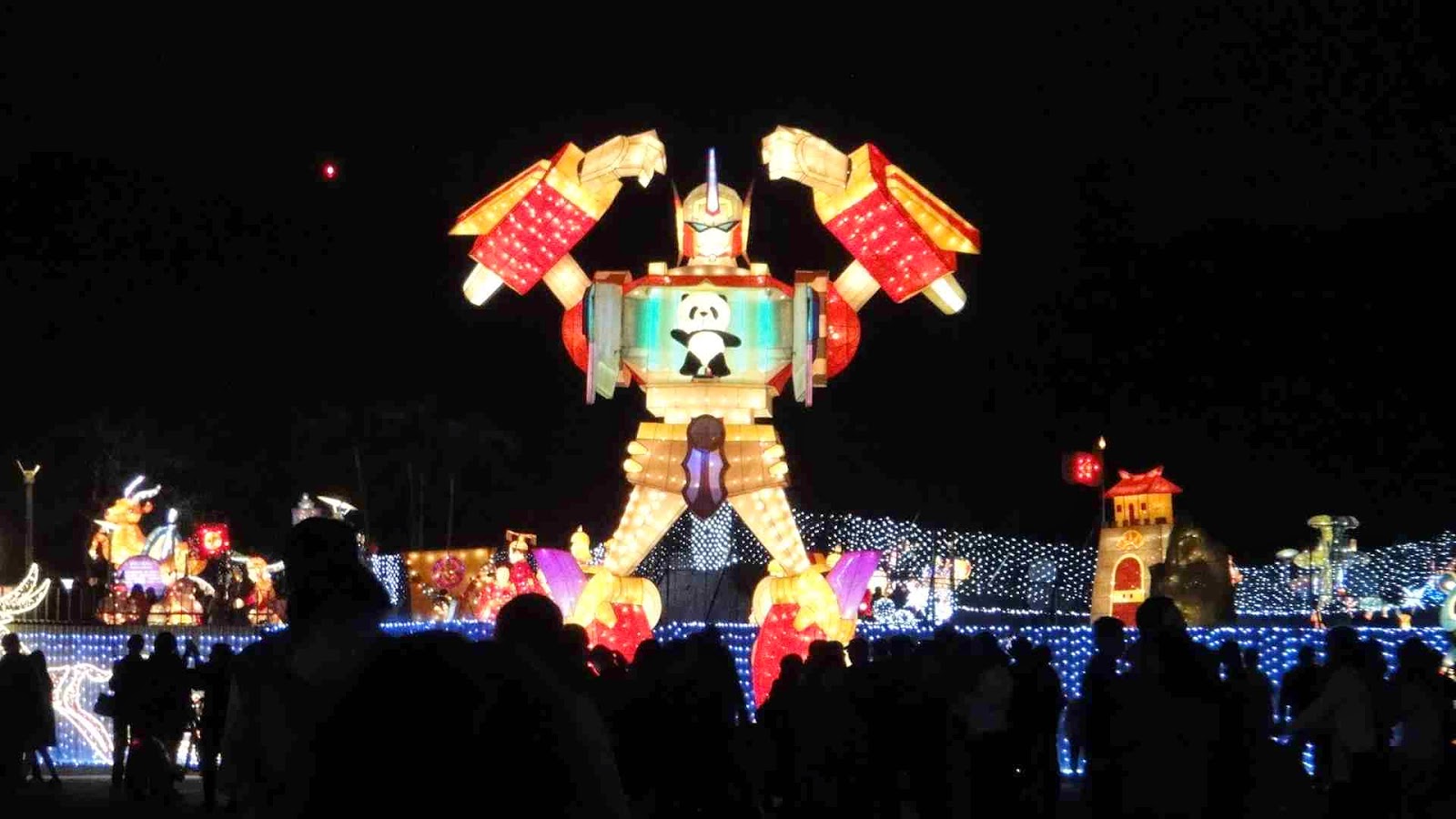 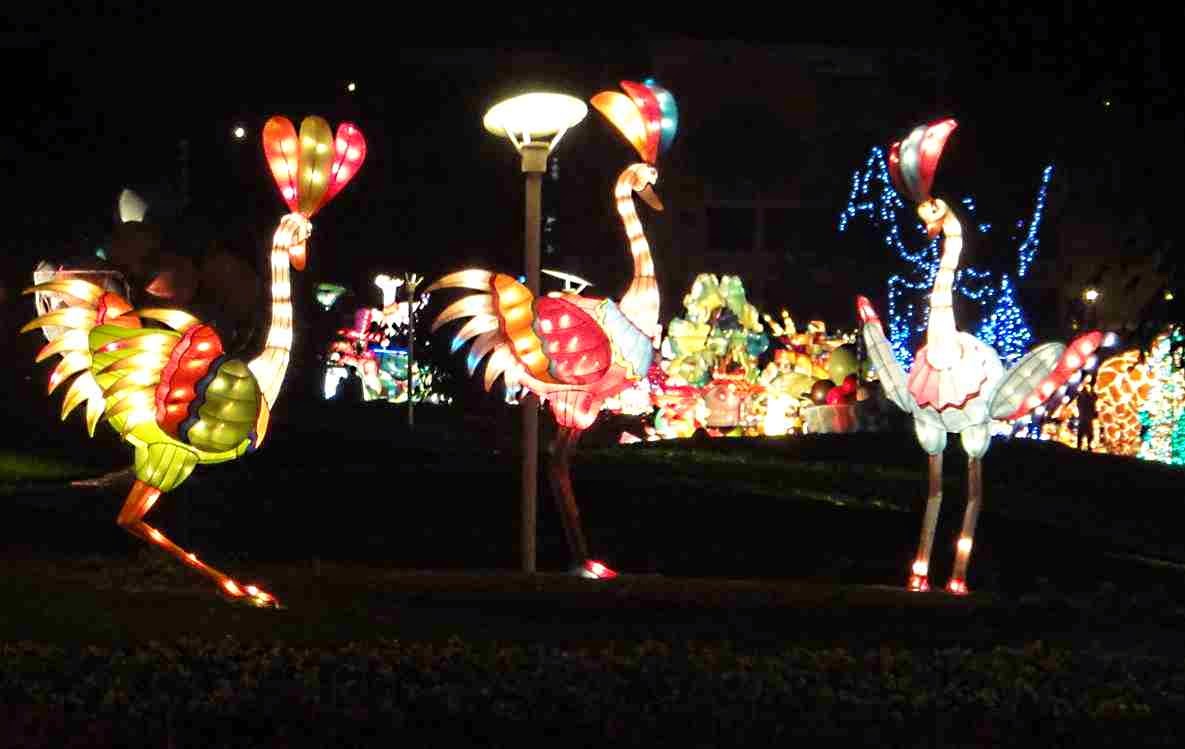 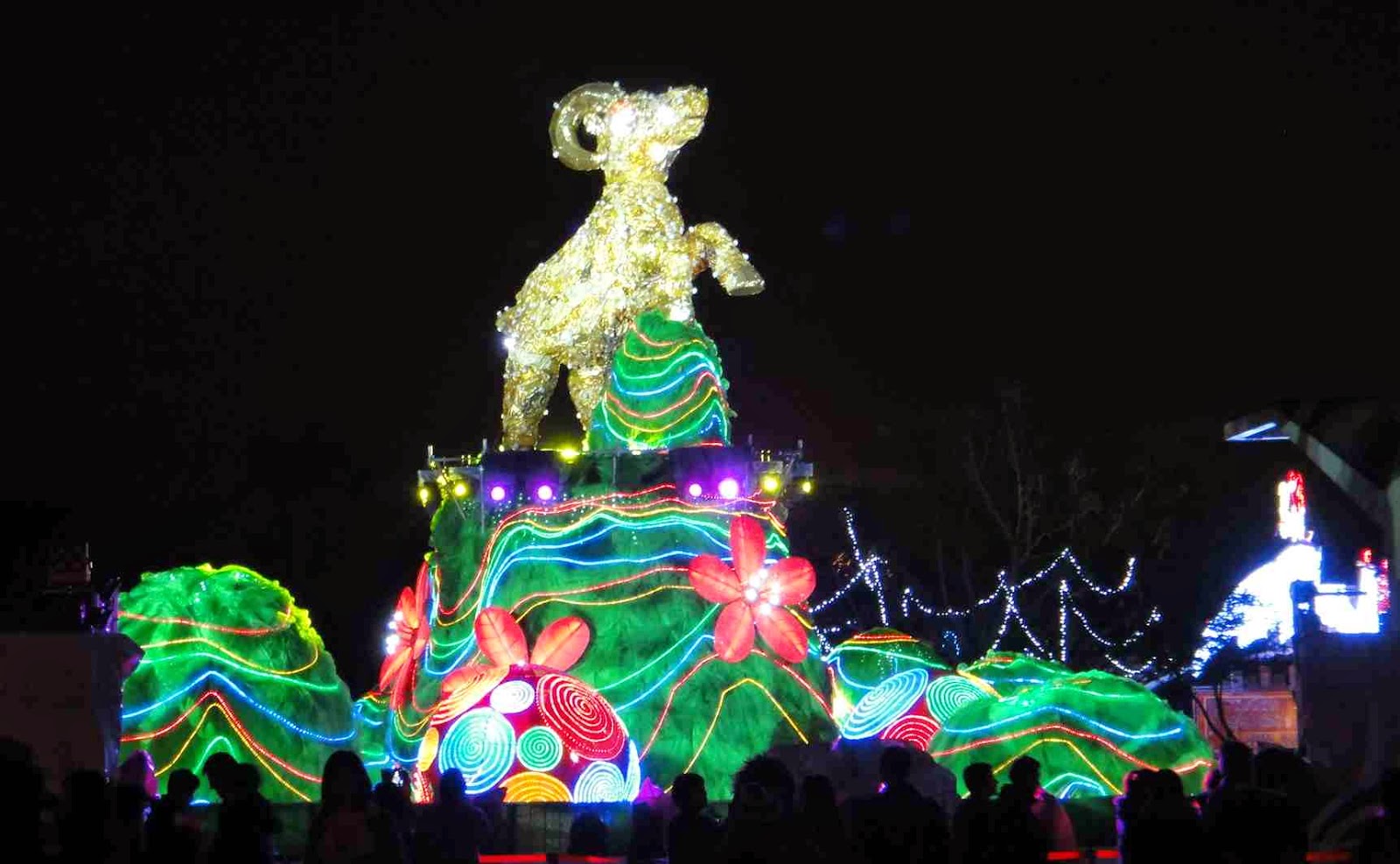 Every year there is a main lantern with the theme of the current zodiac animal. This metallic, twinkling goat on a mountain top was about five stories high. There were lights playing, music blaring, and the mountains grew and changed shape!

Here is one final overview picture of the Goat Year Lantern Festival. The creativity and quality of these huge lanterns (the average height was probably six to ten feet) is amazing, especially for something so ephemeral. It is sad to think of all these being dismantled next week.

Again, let me know your favorites, and if looking at these has given you any ideas, tell me what design of lantern you might submit for a future festival.