Lions, along with dragons, are the animals most commonly depicted in Chinese art. They range in size from monumental sculptures to the tiniest of amulets. Lions are valued for their protective symbolism. In architecture, lion guardian statues are placed flanking doors, and inside of houses are found the subject of today's post, small wooden masks carved with the features of lions.

These masks invoke the fierce qualities of lions to repel evil spirits, and when found among Chinese antiques often possess a charming, folk-art quality. The ones shown here measure from less than two inches to about five inches across. The features on these lion masks are very stylized rather than realistic, and mythical elements may be incorporated.


Painted red and with traces of the original gilding, this round example is very typical. The lion has large bulging eyes, with a prominent nose and forehead. The mouth is open, exposing the teeth, fangs, and protruding tongue (some varieties also carry a sword in their mouths). Tufts of fur are indicated in various places, and around the perimeter.

Veering from the Western concept of lions is the single horn in the middle of the forehead. Also on the forehead is the Chinese character wang, ( 王 ) meaning King. In this example the word King is carved on the horn itself. Finally, there are three small holes, from which small bells were originally hung further to help scare away unwanted spirits. 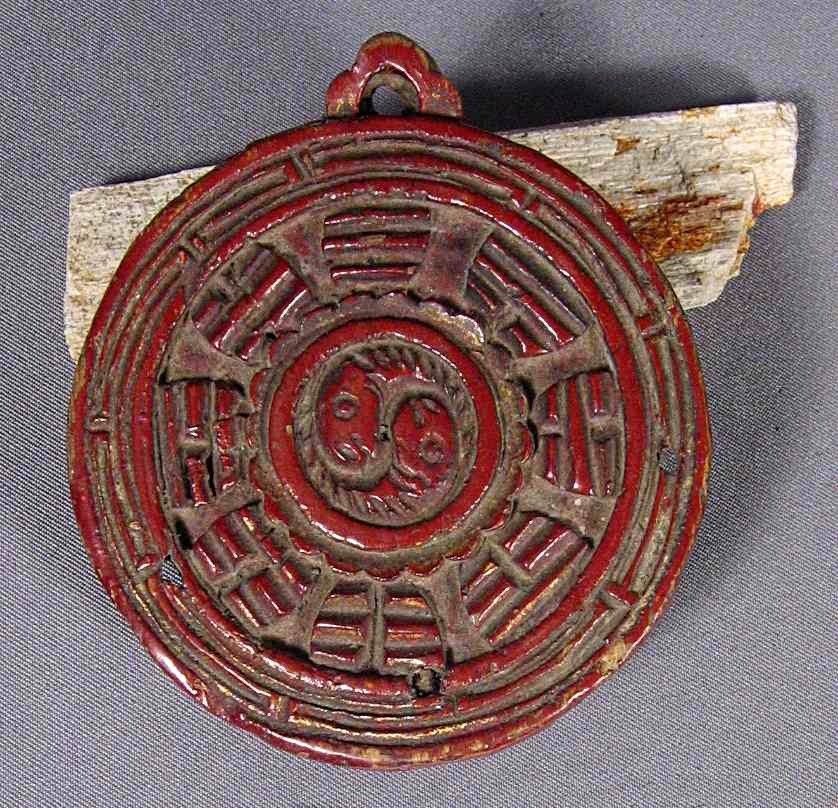 Here is the back of the above example. A rounded fretwork border surrounds a ba-gua design. These eight-sided figures containing eight trigrams are important in Chinese religion. The configuration of the trigrams conveys meaning, perhaps in this case personalized for the original owner. In the center of the ba-gua is a yin-yang symbol, here charmingly carved as two complementary fish. 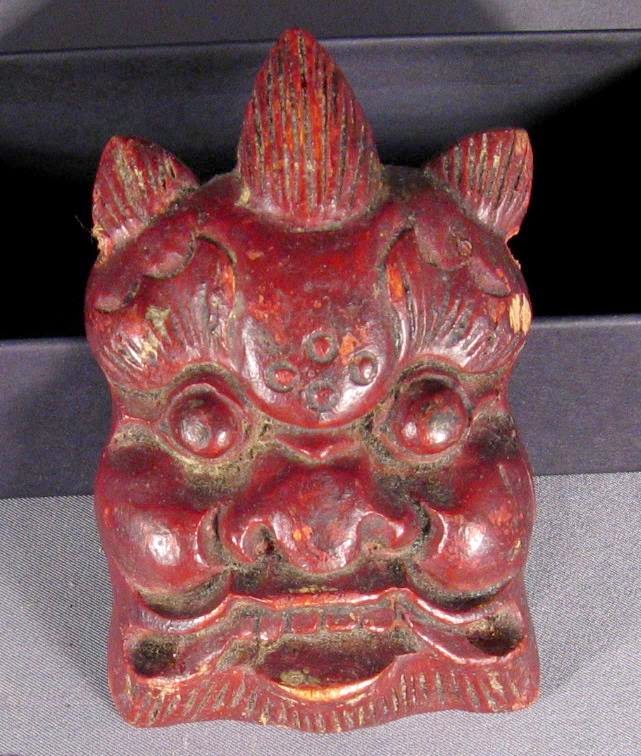 Some masks are carved in a style allowing for more freedom depicting the features. In this rather squared-off example, the ears and especially the horn are allowed to protrude. The eyebrows are almost shaped like bats, and the King symbol has been replaced by four dots. 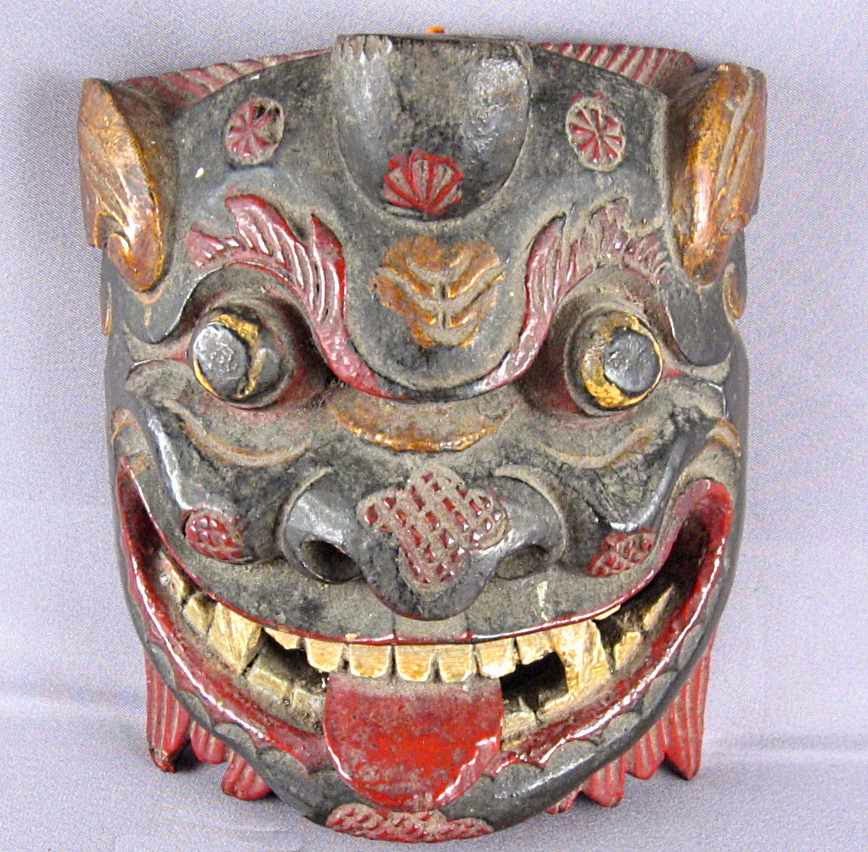 The above rather elaborate lion mask has well preserved paint of black, red, gold and white. Tufts of fur typically appear as odd geometric shapes and patterns, highlighted in red. Even the arms of the King symbol seem to flow as though they were part of the fur. The eyebrows have assumed a flame-like shape. The bright red tongue is plainly visible, and the white teeth have a startling and strangely human quality. 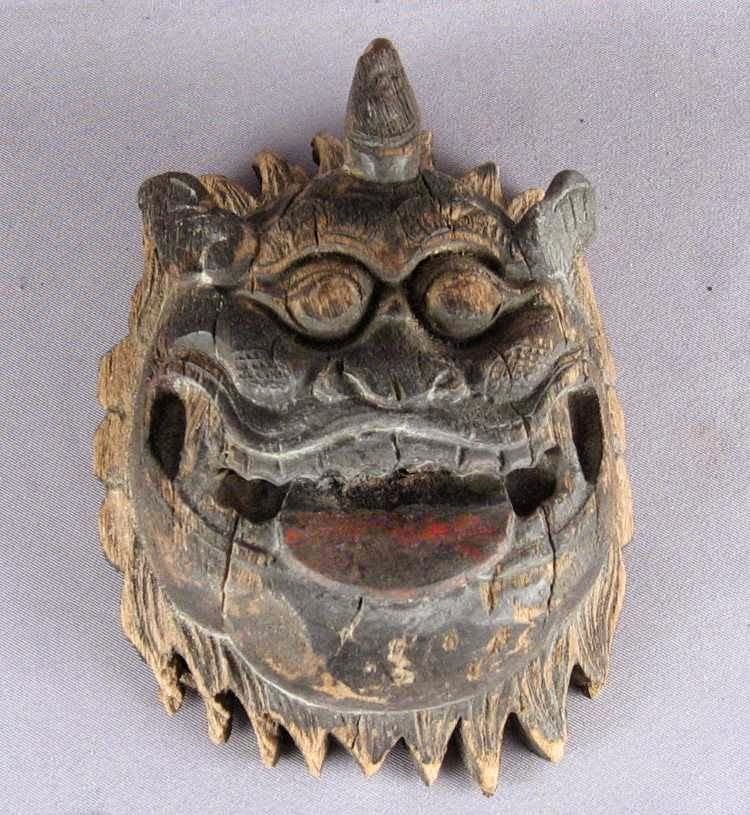 If I were giving these masks names, this one would have to be called Dopey. His double chin, broad grin, and beady, narrow-set eyes all conspire to give him an unintelligent yet genial look. Still, this piece is carefully carved: the horn is so accurate that it looks like the real material, and shaggy tufts of fur form his asymmetrical beard.

The reverse side shows a mortise instead of a simple hanging device, suggesting that this once may have been part of a larger object. If so, the imagination boggles at what the entire original creation must have looked like.


I am not sure why some of these have such flat sides, as though reflecting the shape of the board they were carved from. This red and black example has a bushy fringe of beard, and the King symbol has the three cross bars carved, but not the vertical stroke, giving this lion the appearance of having worry lines. 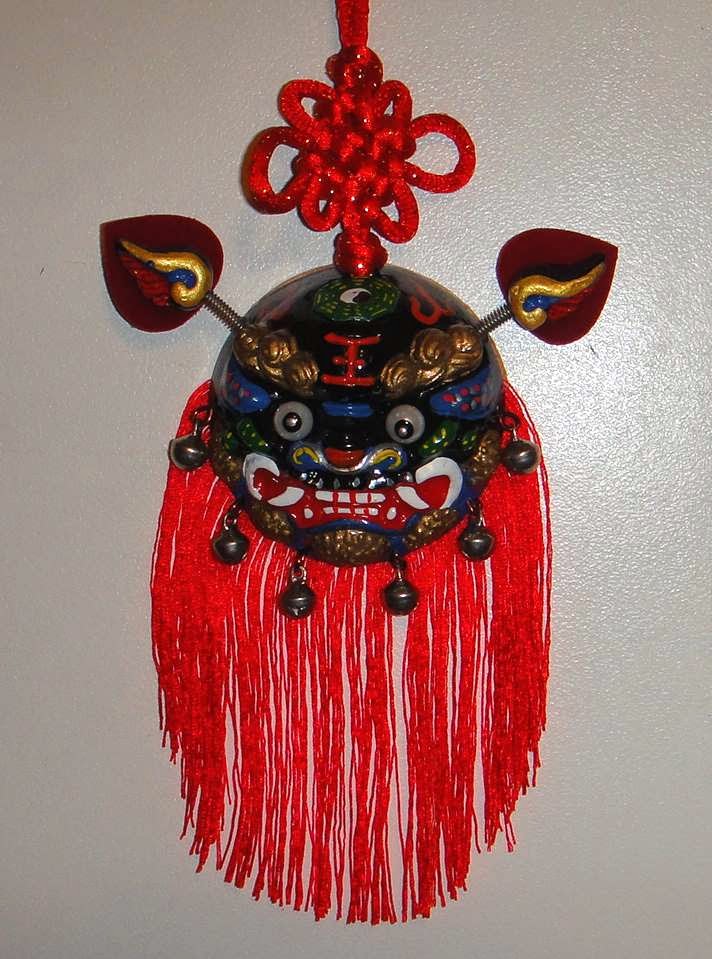 Lion masks are still very much a part of Chinese culture. The above mask, a recent gift from local friends, adheres faithfully to the ancient model—the round shape, fierce, exaggerated features, bared teeth, small bells and King symbol are all present. The horn, however, has disappeared and been replaced by a miniature ba-gua. 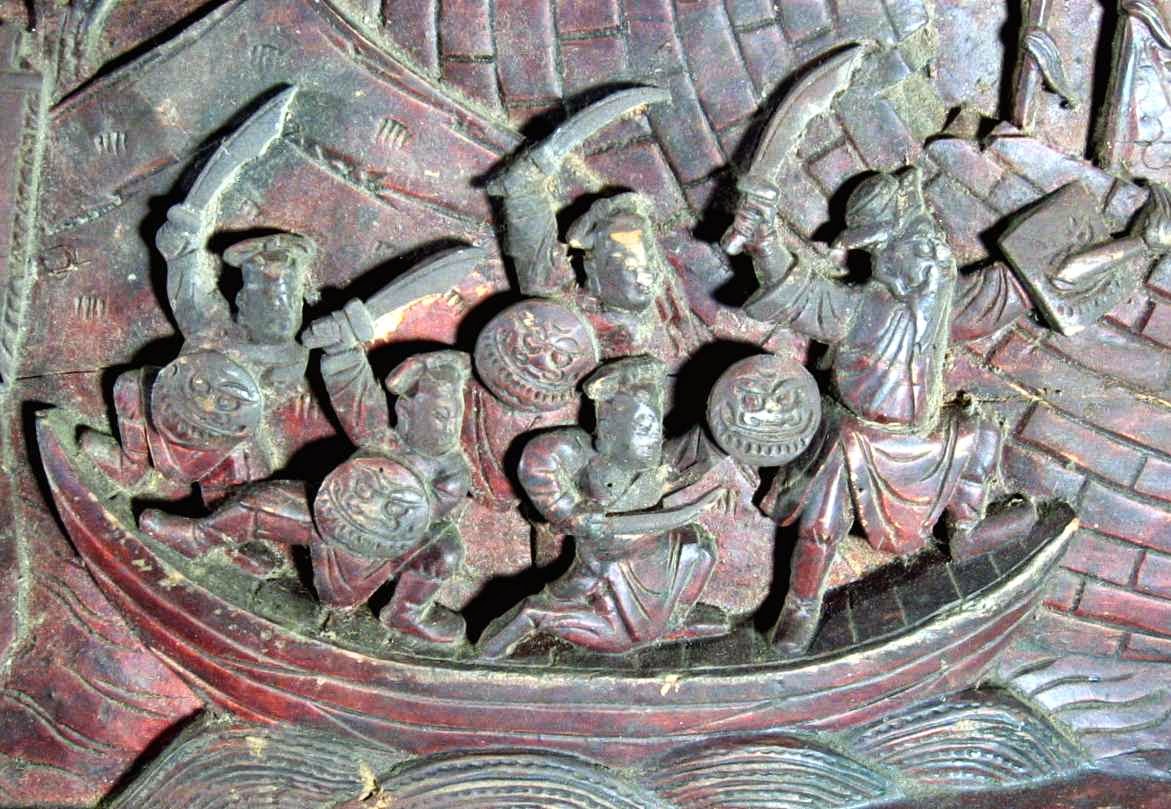 Similar lion masks can be spotted frequently exerting their good luck spell on door-knockers and in colorful tile work. Shields often assumed this form, as in this battle scene of warriors in a boat storming a walled city. I find this carving amusing because the lion shields look ready to be cut out and hung as individual amulets.

Other countries also display talismans in the home to bring protection and luck. Horseshoes and Pennsylvania Dutch hex signs come to mind, as do the intriguing witch balls recently featured by ChronicaDomus.

Among the wide array of Chinese amulets, lion masks were popular choices. Let me know which one of the masks presented here you would rely on to keep evil spirits at bay, or whether you have other good luck pieces protecting your home.

Harvard's Gothic Revival Gore Hall is a stand-out among 19th century college buildings. Built in 1838 by architect Richard Bond, this was the first building at Harvard specifically meant for a library. While Harvard possesses many fine buildings, many tend to the heavy and rectilinear, so it was a shame that the lively Gore Hall was torn down in 1913, on its seventy-fifth anniversary.

Gore Hall was named for famed Harvard alumnus Christopher Gore, 1758-1827, patriot and politician, who in his will left Harvard a generous $100,000 (one third of the eventual cost of the library). Gore is known to many because of his exceptionally fine Federal house in Waltham, Massachusetts called Gore Place, built in 1806.  I don’t know whether Gore meant specifically to build a library for Harvard, but the honor was appropriate, as Gore was interested in student welfare, was known to be scholarly, and had assembled an extremely fine personal library at Gore Place. 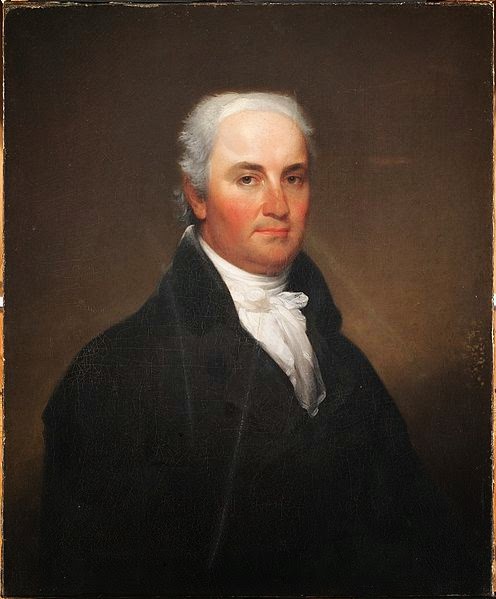 While I have collected many photographs of Gore Hall, my favorite is the one below by famed Boston photographer George Kendall Warren, 1824-1884. In this very fine c.1860 architectural portrait, the details are crisp and the contrast is dramatic, with the silhouetted elm branches echoing the Gothic curves of the building. 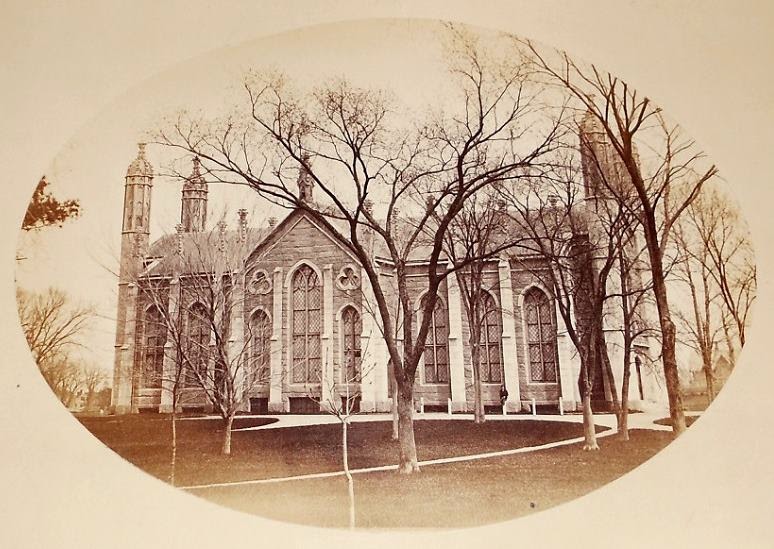 The architectural inspiration for Gore Hall was the 15th Century King's College Chapel at Cambridge University in England. The Chapel is a much grander building, while Gore Hall is more friendly and intimate, and in my opinion some of its proportions are perhaps more pleasing. Incidentally, this was not the first or last time the American architects would look to the King's College Chapel. While all three buildings created much different effects, the original building of New York University (built 1833, demolished 1894) and the Old Library at Yale (built 1842, still standing) do share a noticeable family resemblance to Gore Hall.

In 1877, Gore Hall had outgrown its storage space, and a large addition was built. While not quite as handsome as the original building, the new wing was important because it was the first library in which the metal book stacks formed the architectural structure of the building, actually supporting the floors and roof as well as the weight of the books.

Gore Hall was specifically described in Henry James’ 1886 novel The Bostonians: “This edifice, a diminished copy of the chapel of King's College, at the greater Cambridge, is a rich and impressive institution… suffused with the odor of old print and old bindings…the high, light vaults that hung over quiet book-laden galleries, alcoves and tables, and glazed cases where rarer treasures gleamed more vaguely, over busts of benefactors and portraits of worthies, bowed heads of working students and the gentle creak of passing messengers…” (Thanks to the Library of Congress for pointing out this passage.)


Gore Hall itself has been gone for more than 100 years, but its image still adorns the seal of the City of Cambridge, designed in 1846 by then Harvard president Edward Everett. The other image on the seal, the Washington Elm, only survived a few years longer, until 1923, so Cambridge is ironically symbolized by things that are no longer there—this presumably comes under the rubric of Progress.


In 1913 Gore Hall, having once again outgrown its capacity, was razed to make way for the current Widener Memorial Library, built to honor Harry Elkins Widener, who went down on the Titanic. Although the Widener is one of Harvard’s most important buildings, it seems a shame that they could not have found another site for it, and that no greater effort was made to save sprightly Gore Hall, by then steeped in University tradition.


When tearing down this building, several of the spires were saved and installed at Appleton Farms, now a public park in Ipswich, Massachusetts. Another vestige of Gore Hall came to light when recently some repair work was being done to the Widener Library, and part of the original foundation of Gore Hall was excavated.

This final atmospheric image of Gore Hall that I want to leave you with will come as no surprise to those who recall my fondness for night postcards. The beckoning lights glowing within the building would not have been a feature of the library's early days. Look again at the Warren photograph, and note the high proportion of window space in the walls; during the oil lamp and gaslight era, the administrators were so terrified of fire that no artificial lighting was allowed, and Gore Hall had to close each day at dusk.


(All images and original photographs, except as credited differently, are the property of the author.)