A Jingling Johnny Puts in a Rare Appearance

Taking the time to examine historic objects brings out details that imbue the articles with interest. The above photo is from an 1870’s stereoview and shows a typical genre scene of a musical rehearsal, but a second glance shows that the photographer recorded something unusual.
There are four male musicians accompanied by a woman playing a keyboard instrument. Two of the men are playing a cornet and a trombone, both perfectly ordinary. One is playing an early tuba, highlighted in a blue square, but the most interesting is the performer on the right, highlighted in red, who is playing the Turkish crescent, also known as the Jingling Johnny.

The Turkish crescent was a percussion instrument, basically a pole hung with bells. Mostly a flashy parade instrument, it was meant to be shaken or twisted to ring the bells. It is still made and used to some extent, so is not entirely obsolete. This one is very typical, with a crescent on top, conical “hat” below (yet another name is chapeau chinois, or Chinese hat), and a larger crescent below that, all hung with bells. Their polished brass and exotic shape make them popular with musical instrument museums, as with these examples:

The Turkish influence was popular in Western music starting from the 18th century—think of Mozart’s Rondo alla Turca. Many pianos of the period had Turkish or Janissary stops which controlled various bells, cymbals and drums.
Although the jingling Johnny itself was popular, photographs of it are rare, especially in use, and this is the only photo I have seen that shows it in a home environment. Thus this photograph, even if possibly staged, gives evidence of how people used and thought of the instrument.

Most mechanized brass instruments were developed in the 19th century, but this tuba seems primitive even by the standards of 1870. It is still shaped very much like the earlier ophicleide, from which it was developed. Notice that the bell end is simply a wide truncated cone, with very little flare to it. The tuba in this photo resembles the Moritz tuba, which Phillip Young remarks is noted for its early primitiveness.

Here is the entire stereoview. (The two halves were taken at slightly different angles, and appear three-dimensional when viewed through a special viewer.) The image as a whole helps tell us how people spent time and entertained themselves 140 years ago, playing instruments, forming home music ensembles, and even looking at stereoviews. An interest in musical instruments lets us notice the individual elements of this photo, with the result that two early and unusual instruments are brought into focus. 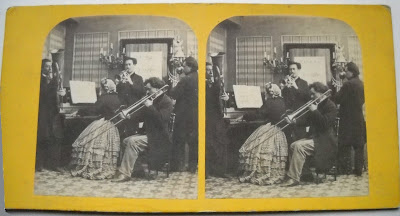 Labor Day is upon us, and students everywhere are returning to their dorms to prepare for another year of  studying and partying. This immemorial custom was true even for the patrician students of Harvard college back in 1899, as we can see from glancing though old issues of the Harvard Crimson. 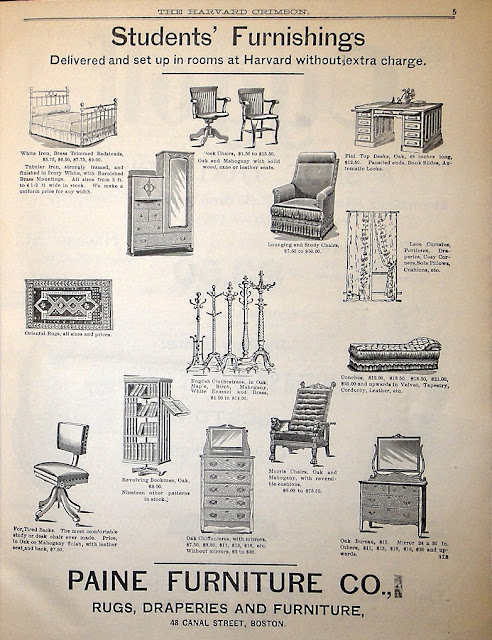 Many of the ads feature furniture and other appurtenances of the late nineteenth-century dorm room. Most of it seems pretty fancy. We are solidly in the golden oak period, and there is still quite a bit of Victorian frippery in evidence.
One often thinks of dorm furniture as miscellaneous cast-offs, with perhaps a parsons table from Ikea thrown in. Naturally, one would expect a higher standard at Harvard. Richard Bissell, in his classic You Can Always Tell a Harvard Man, quotes an 1876 letter from Theodore Roosevelt (Harvard 1880) describing his room: “The curtains, carpet, furniture—in short, everything is really beautiful; I have never seen prettier or more tasteful wall paper. When I get my pictures and books, I do not think there will be a room in College more handsome or comfortable.” 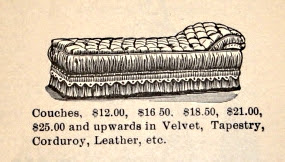 This dandy analyst’s couch would have been just the thing for budding Harvard psychoanalysts at the turn of the century.  Freud was then at his zenith, and in 1899 William James, one of the founders of modern psychology, and brother of psychological novelist Henry James, was teaching at Harvard, so there was likely a strong demand for this particular piece of furniture. 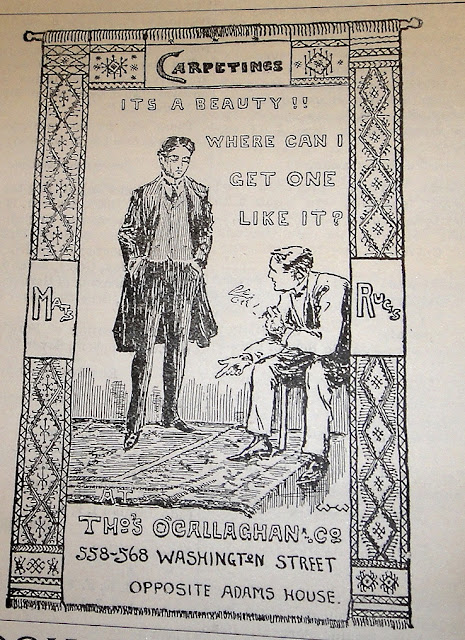 The above ad for carpeting features an unlikely conversation between two students. It’s just a trick of the shading, but the standing one looks like he’s wearing a monocle, adding to his supercilious bearing, and making him resemble P.G. Wodehouse’s character Psmith. He doesn’t seem to be looking at his friend, but rather at the burning cigarette without an ash receptacle in sight, leading to new-carpet anxiety. He apparently has never heard the maxim that ashes are good for rugs. 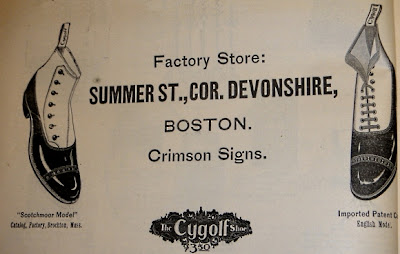 Clothing of all type was heavily featured to outfit the returning students. The Cygolf shoes above look appropriately Victorian, but the Tuttle ones below in every detail could still be sold today. How many products have a 112+ year life-span without any modification or design changes? Classics endure. 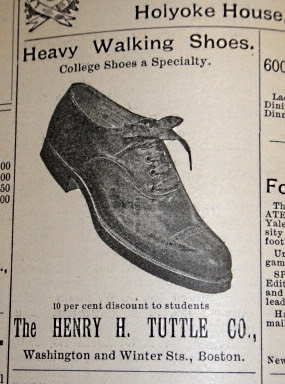 Harvard students needed to relax following all that strenuous decoration, and there were plenty of options available. They might go to see Mlle. Fifi, not a young lady, but the controversial play by Oscar Méténier, based on a story by Guy de Maupassant.

Tobacco pipes were practically the emblem of the college student back then, and fine meerschaums were none too good for the Harvard undergraduate. Luckily, they didn’t have to depend on puritan Boston tobacco, or some questionable Harvard blend, but indulged in Yale Mixture tobacco.

Billiards were yet another option. Students could amble down to Sanborn’s Billiard Parlors, or the more exclusive could purchase their own table  from J.E. Came and Co.—notice the 4-digit phone number in Boston. If you look closely, you see this is a true billiards table, with no pockets. Anyone who has seen The Music Man knows how déclassé pool and pool halls are, compared to billiards; I’m sure that pool is still beneath the notice of Harvard students. 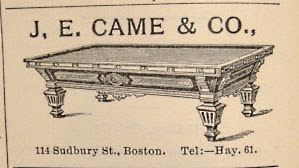 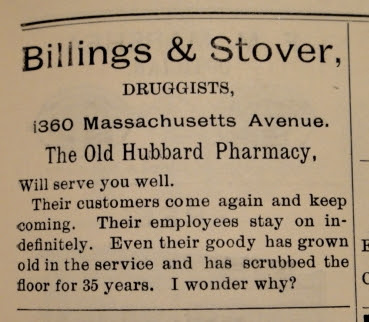 I had always associated Stover with Yale, but apparently he needed a career after his gridiron glory days were over. I realize they were tying to demonstrate customer and staff loyalty, but somehow their testimonials seem peculiarly unappealing--their constancy seems more like addiction or mesmeric coercion. I would not base my choice of pharmacy on the sole fact that their scrubwoman (presumably Old Mother Hubbard herself) has scrubbed the floors continuously for 35 years. Note the interesting use of the archaic word “goody”. 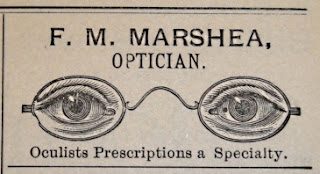 These old ads from the Harvard Crimson are amusing because they reflect the world of the 1890’s, yet are curiously relevant over 100 years later. Oriental rugs and briar pipes are no longer de rigueur, but the basic nature of college students has not changed. College and a dorm room represent the first taste of independence, and students want their quarters to be comfortable and attractive, while proving their maturity and sophistication.
Posted by Parnassus at 1:35 PM 10 comments: