Chinese New Year for 2016, which is a Monkey Year, starts this Monday, February 8th.  Monkeys in Chinese culture, as in Western culture, symbolize playfulness and mischief, and as such are found depicted in great variety, and in every branch of Chinese art.

Monkeys can appear as natural animals or in the person of Sun Wukong, the Monkey King or Monkey God, from the classic story Journey to the West. In this story, one of Sun Wukong’s many adventures involves his stealing the Peaches of Immortality, when he was excluded from a feast of the gods. Even the naturalistic monkeys are usually depicted as holding, proffering, or reaching for a peach.

The above silver pendant shows a monkey among the peach branches, well-pleased with himself for taking one of the peaches. At the bottom are four holes for suspending small bells, or perhaps for the tools of a chatelaine. I especially like this piece of jewelry because of the balance of the design, and also the perfect toning of the silver. The airy openness of this pendant, which I gave to my sister, recalls some of the openwork jewelry from ancient Egypt. 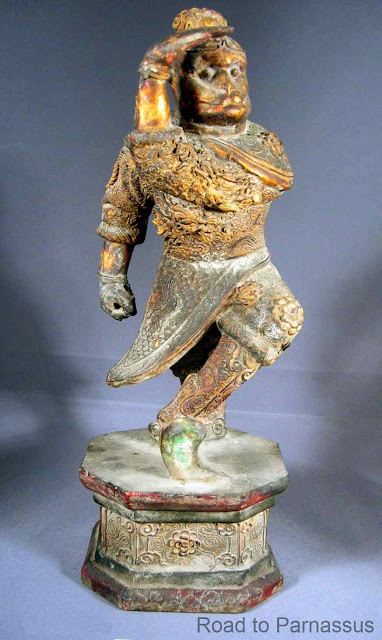 Above is a rather elaborate representation of the Monkey God, almost entirely covered in gold leaf, wearing a very detailed coat and sporting his characteristic salute. (In the recent post on the toddler statue, I mentioned the simplicity of his garment. The Monkey God’s outfit, on the other hand, is more intricate than is usual.) The octagonal base is interesting as well, with its plain top and plinth sandwiching a band of yet more detailed, gilded carving. 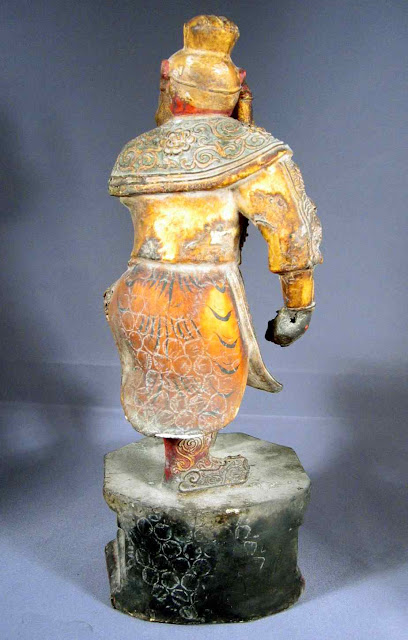 The back of this statue features the tiger-skin skirt of his costume, but is more notable for the cautionary tale it tells. Those white dots are not original, but are the result of storing this in bubble-wrap, which has interacted with the painted surface. Bubble wrap is not a safe material in which to wrap antiques, especially those with a painted or otherwise delicate surface. Much better is to wrap the object with tissue paper first, preferably acid-free, then adding bubble-wrap if more padding is needed.

The following rather surreal furniture panel certainly plays with the sense of scale, showing either a very large monkey, or very small buildings. This monkey is hardly natural—besides the odd proportions, the artist employed a common convention to show fur, but which resembles eyelashes! In addition, he is reaching for some peaches still growing on the tree at the far left, to which our eye is led by his extended arm, so this may represent the banquet scene mentioned above from Journey to the West.

Among the more unusual handicrafts to be found in traditional Taiwan street fairs are leather animals, ranging from miniatures to full-sized horses. Almost every kind of animal can be found. The following pair of leather monkeys are rather old, gauging from their general appearance, and the fact that the eyes are of glass. With their menacing looks and present state of gentle decay, they seem more suitable to celebrate Halloween than New Year. With those sharp teeth and wiry fingers, I can't imagine that these looked too friendly even when new, and wonder why the original owner acquired them. 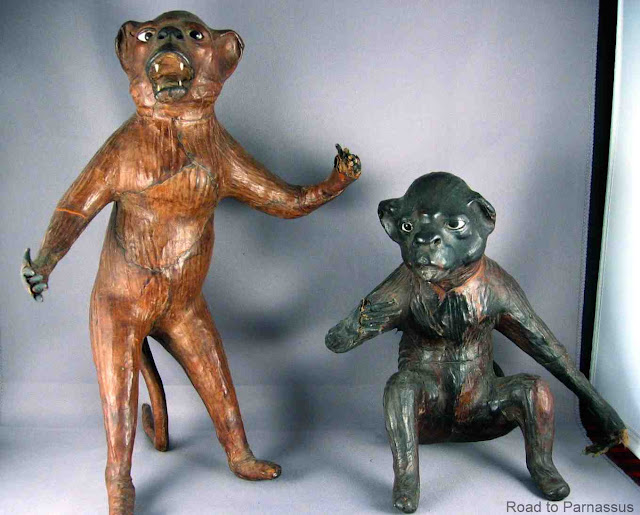 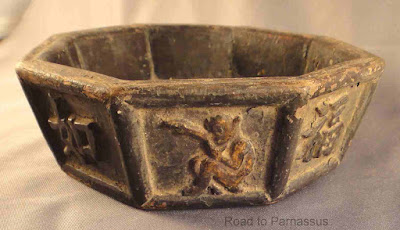 The above octagonal wooden bowl may be recalled from Goat Year's post last year, when the opposite panel was highlighted. The monkey carved on this side still has traces of gilding, and is surrounded by characters representing luck. 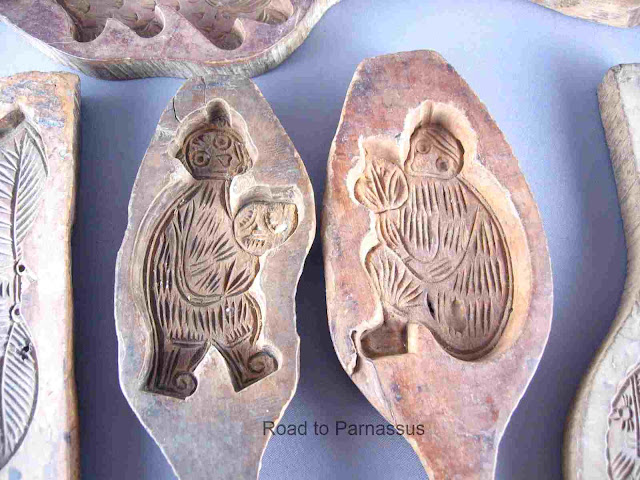 The last photo shows two of the ubiquitous Chinese cookie or cake molds, in the shape of monkeys holding peaches. The hatching of the fur, although still schematic, looks more natural here. While the poses at first seem similar, one of the monkeys is seated, and the other is striding, apparently wearing curled-toed shoes, no less.

Let me know if you have a favorite among these different monkeys. I hope that Monkey Year will arrive bringing a generous measure of the monkey’s playfulness and humor, as well as the longevity, health and abundance promised by his peaches. Happy Monkey Year!

(All photos and original objects, except as noted, property of the author.)