The recent post by Parvum Opus about Christmas crackers reminded me of the cracker-pulling scene in the 1913 Russian silent stop-action animated film, The Insects’ Christmas, by Ladislav Starewicz. If you have never seen this, please click on the link to Youtube and watch it now. Those not already familiar with Starewicz probably think that I am tricking you into watching something scary, but I guarantee that you will be charmed by this short film and that it will become your new holiday tradition. Let me know in the comments what your favorite part was--mine is perhaps the breaking ornament, or the doll that keeps waking up. Incidentally, Fröhliche Weihnachten! is German for Merry Christmas.


I haven’t been out much recently, but the other day I went to the electronics plaza, and this tree outside was cleverly decorated with neon ornaments showing computers, digital cameras, cell phones, cd’s, etc. 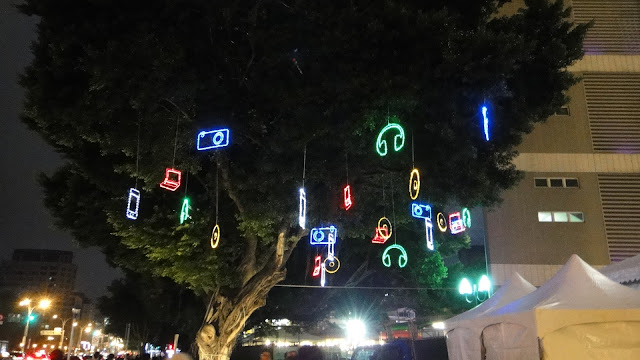 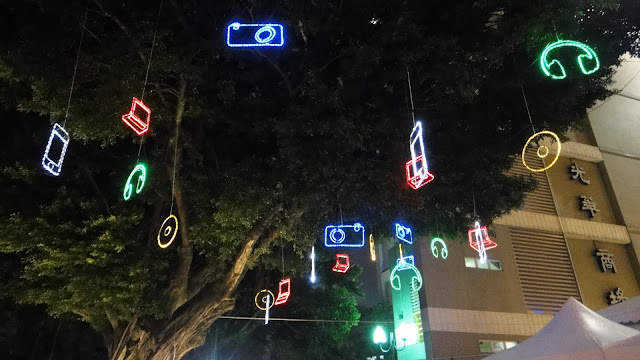 The Taiwanese don’t seem to have gotten Santa quite right;  he’s not as jolly as in the Western version. Maybe it’s his glaring expression or emaciated body, or perhaps it’s that gun he’s reaching for.

If that’s what Santa is like in Taiwan, it’s just as well that there are no chimneys or fireplaces here. For those of you in more temperate places, I would like to wish everyone a Happy Holiday Season.
Posted by Parnassus at 11:29 AM 28 comments:

Email ThisBlogThis!Share to TwitterShare to FacebookShare to Pinterest
Labels: Taiwan

In Chinese galleries and museums, we see impressive examples of carved jades, imperial porcelains, and Ming furniture. However, a whole other world of Chinese antiques and artifacts exists, objects which people used in their daily lives. Many of these are easily recognizable, such as mirrors, paperweights, or teacups. Others are remarkable for their strangeness, either in form or decoration, hence this new series dedicated to exploring them.

I don't use the word 'weird' in any negative way, but rather in its sense of fantastic or bizarre, something that stimulates the imagination to wonder about the people who created it, and what needs they had that these items could fulfill.

At the very highest level of oddity are those relics with no conceivable use or explanation, but which have survived nonetheless. The patina of time usually manages to enhance the strangeness and mystery of these obscure vestiges of the past, which are among the most delightful to seek out and collect.

In short, a weird antique is anything that evokes a sense of wonder and delight, that serves as a window to a dramatically different place, age, or mindset. 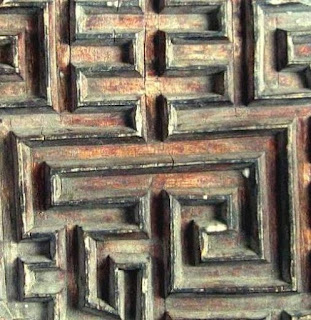 Mystery Object #1
First let me thank you for all of your perceptive and interesting guesses. Many realized that the pattern on the face was meant to be transferred, but the question remained transferred to what?

This maze-like object is a device to prevent pilferage of flour or other grains. Flour was kept in a barrel, and when meals were prepared the housekeeper would measure out the needed quantity, then press this onto the surface of the flour to make a design, so it would be easy to tell if the flour were later disturbed. (This flour print would work equally well in a restaurant or store.)

The old days are constantly touted for their honesty and ingrained moral values, but people back then were in the habit of putting locks on almost everything. Think of most antique furniture—a lock on every drawer and cabinet door. Closer to the kitchen, tea caddies were always provided with locks to prevent filching of tea leaves.

Fair or not, servants were distrusted, and supplies kept under lock and key. Jennifer Davies’ excellent book The Victorian Kitchen outlines the housewife’s daily schedule: “She then went to the store cupboard, unlocked it and doled out any extra provisions that the cook might need for the day.” 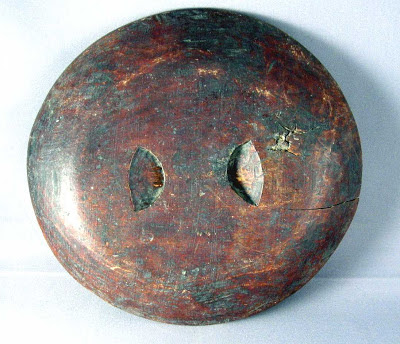 It is important to closely examine unusual items before making judgments. The present flour stamp is about eight inches across, and thus the right size to insert in a barrel. The finger grips on the back would likewise have been necessary for a stamp that was meant to be pressed down from above. The labyrinthine design seems to be a variation of the longevity character shou (壽), frequently found on decorative and lucky objects. The design is very deeply cut, which would work well for flour, but be rather unusual for other purposes.

Some of the alternate suggestions that readers offered deserve careful consideration, as rare objects can be misidentified or have multiple uses. This does look a lot like a printing block, and there might be traces of black ink on the surface. However, print blocks were not cut this deeply, and as a rule are deeply stained with ink. Also they generally were not as attractively finished as this flour stamp, with its nicely rounded back.


Another suggestion was a mold to make cookies or moon cakes. These pastries, impressed with traditional designs, are still available everywhere. Most are two to four inches wide, but larger ones exist. The problem with using this for moon cakes is that the design was normally carved in the bottom of the cup-like molds, and usually not cut so deeply.


Several people noted the maze-like appearance of the design. This vaguely resembles some of the patterns on ancient bronzes, but this is another point requiring research. It does work as a maze, even if not a very challenging one:


Have you encountered anything like this, or any unusual anti-theft devices, either as an antique or perhaps in an old novel? I have not met with another of these, although I now have something to look for in the kitchens of house museums. So there you have it—flour stamp, cake mold, or printing block? I think that the preponderance of evidence points to an anti-pilferage device, not to mention that explanation makes the best story.

(All objects and photos property of the author.)
Posted by Parnassus at 9:23 PM 34 comments:

This post marks the inauguration of a new series, tentatively called Weird Chinese Antiques, featuring items that perhaps are more remarkable for their oddity than for their decorative value. In addition, I have always enjoyed those What-is-it? columns, in which readers guess the function of some no longer familiar article, so I am inviting all conjectures as to the identity of this object: 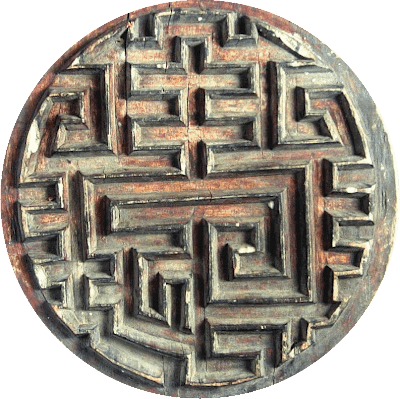 The item presented here is carved out of wood, and is about eight inches across and about an inch thick. As far as I am aware, these are no longer in use, and I somehow doubt that even in their heyday, these were in high demand in the average household.

Maybe you’ve seen one of these, and know what it is, otherwise please take your best guess.

(Mystery object and photo property of the author.)