Tonight, October 31, 2013 at about 8:00 p.m., there was a sizable earthquake in Taipei. I was working at my desk when I felt the first tremors. It quickly got worse; the bookshelves were swaying hard, and I thought they might fall over, but a minute later it was over.

Taiwan is in the earthquake zone, and small temblors occur often, but this one was pretty strong—6.7 magnitude. Still, as far as I've heard, there was little real damage. The last really tragic earthquake in Taiwan hit central Taiwan in 1999, before I arrived here.


Nevertheless, when I looked over my living room, I discovered a few casualties. I had put out some skeleton netsukes for Halloween, but the spirits-at-large must not have liked the irreverence of this display, for several of them had fallen and smashed.


The strangest part is that although I looked and even swept carefully, I was not able to recover all the fragments. I can only assume that the malevolent spirit that swept through Taipei and through my apartment had come to retrieve them, like Madame Zena in A Drop of Water (from the movie Black Sabbath) reclaiming her stolen ring.

I was amused to notice that this toy balancing bat, resting on its pinpoint on a narrow strip of wood, managed to maintain its perch through all the shaking. The god on which he has alighted, called the Fighting Money God, may have lent his protection, as bats often symbolize money or wealth in Chinese art. 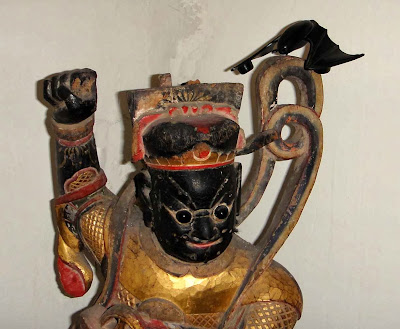 All of you who can place delicate objects on high shelves, count yourself lucky, because here such freedom is not a given. I was fortunate that nothing happened to these lacquered wooden boxes, which I had riskily lined up on top of bookcases:

Often around Halloween there is a weird glow at night which adds to the spooky atmosphere. The view tonight from my balcony is a perfect example, reminiscent of the nighttime postcards I wrote about last year.

Have a Happy and Safe Halloween!