It seems that Chinese New Year comes around more quickly each year. This Friday, January 31st will mark the start of Horse Year. Thinking about horses in Chinese culture, images of the Terracotta Army Horses at Xi’an and of the famous Tang dynasty pottery horses immediately spring to mind.

With associations going back to antiquity, horses are firmly entrenched in Chinese art. Looking though my objects for images of horses, I notice two main types: horses mounted by people or gods, and those in more natural settings.

For all its apparent simplicity, this small wooden statue is a well-planned composition. The black horse, red face, and metallic garments all contrast nicely with each other. There is a constant sense of balance—the horse’s head with the rider’s ‘apron’, the fall of the tail with the fall of the ‘skirt’, and the rider’s bent arm with the horse’s bent leg. Even the gilt scrollwork on the front of the base ties it in with the statue and also echoes the rider’s headdress. 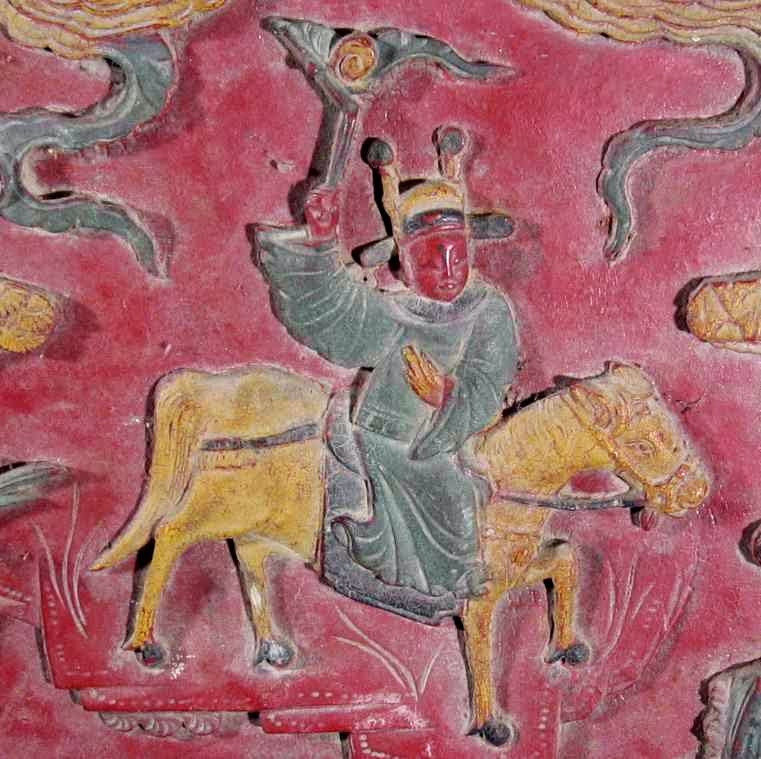 As opposed to the martial air of the first mounted example, this friendlier rider is holding up a toy and playing a game of catch. The above detail comes from a very colorful set of carved furniture panels. 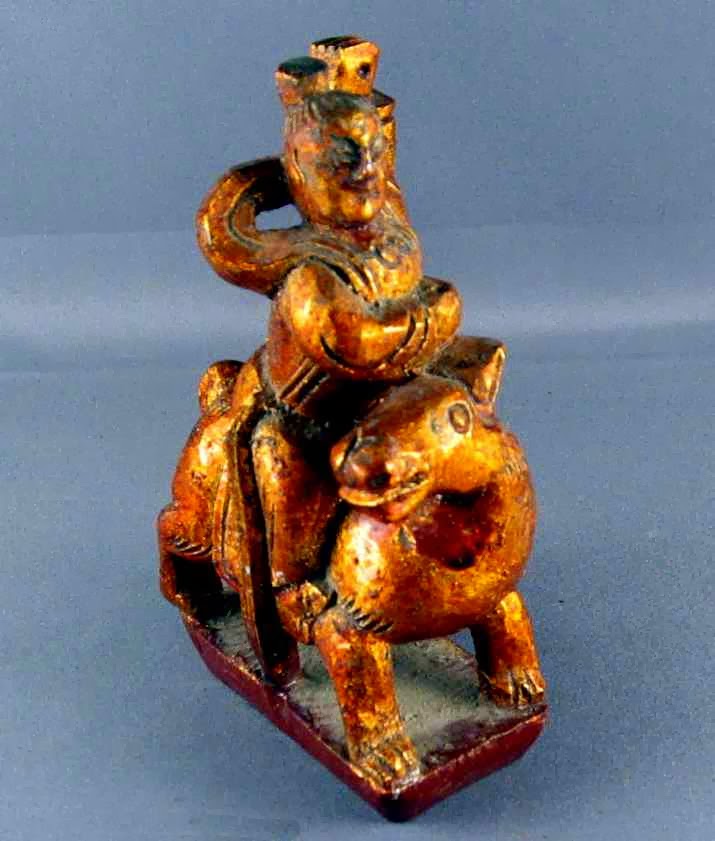 At first I thought this finial represented a horse, based on the head and overall shape, but on closer inspection, the legs (with paws!) and under-carriage look more like those of a lion. Perhaps this is some sort of horse-lion chimera, or perhaps an idiosyncrasy of the carver—I’ll have to be on the lookout for similar examples. 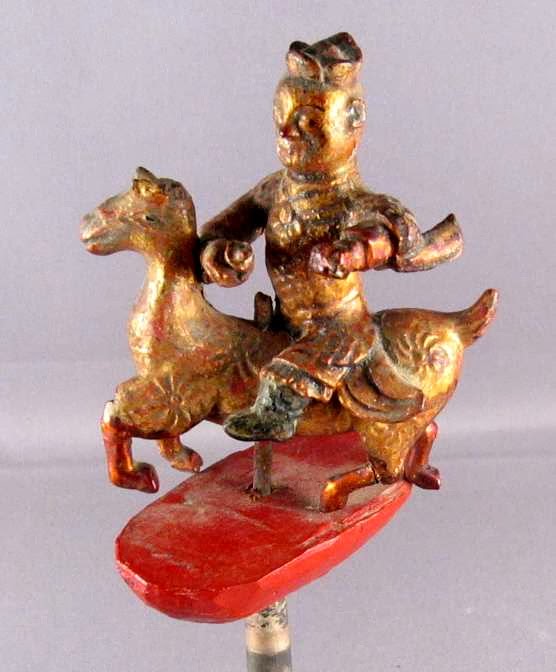 The creature in this finial is definitely all horse. The way it is mounted on an iron pole reminds me of a carousel animal, especially the way it is posed prancing. 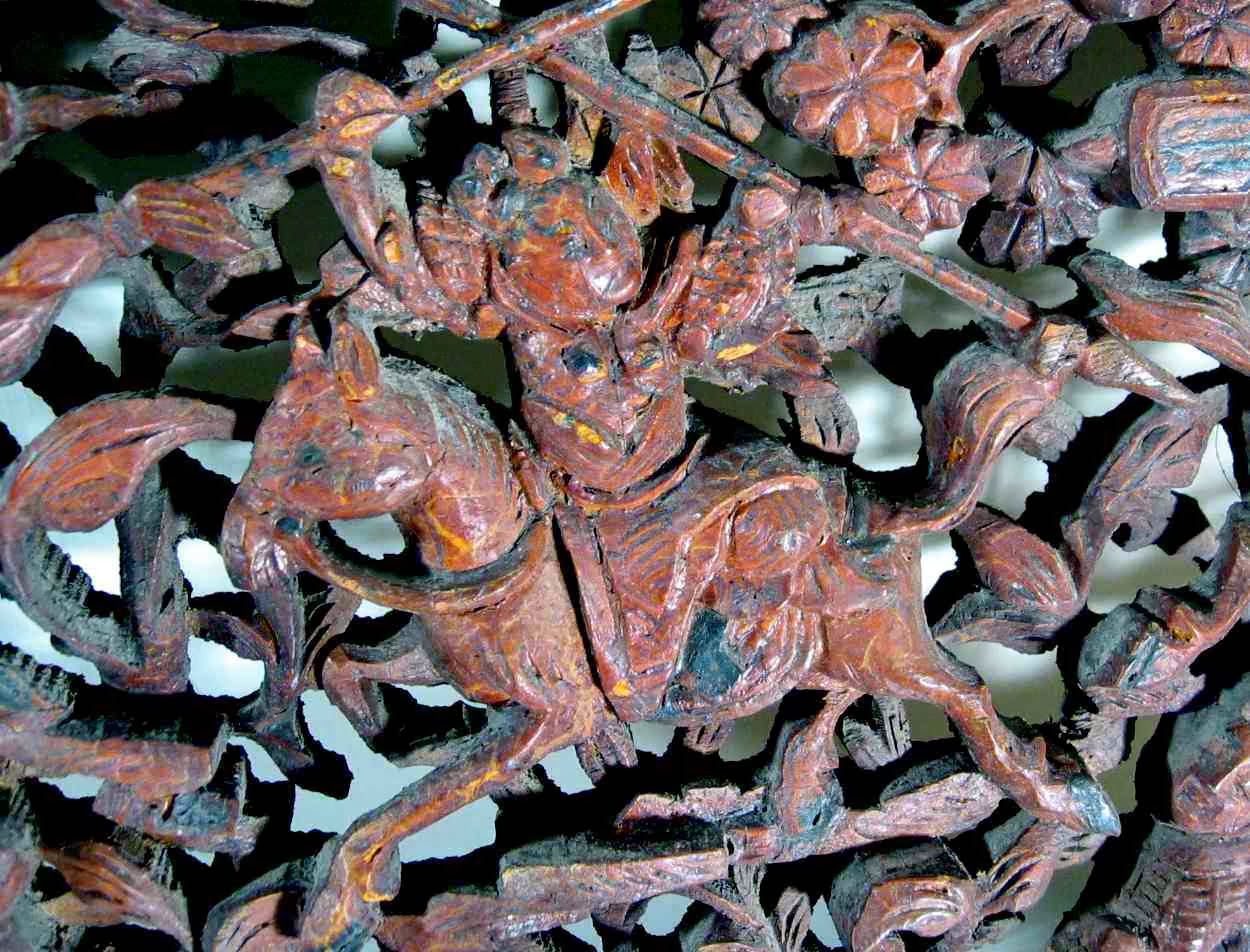 Horses are associated with warfare, and this detail from an intricately-carved battle scene shows the horse at full gallop while its rider brandishes spears and weapons. 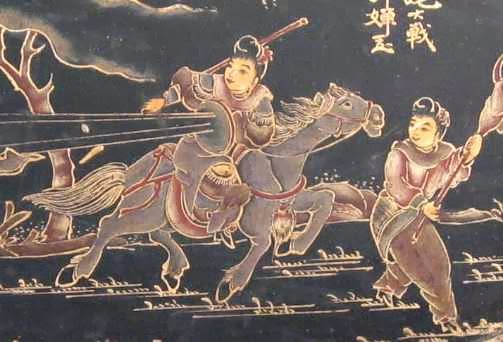 This battle scene, from a painted furniture panel, features the female warrior Deng Chanyu on horseback. 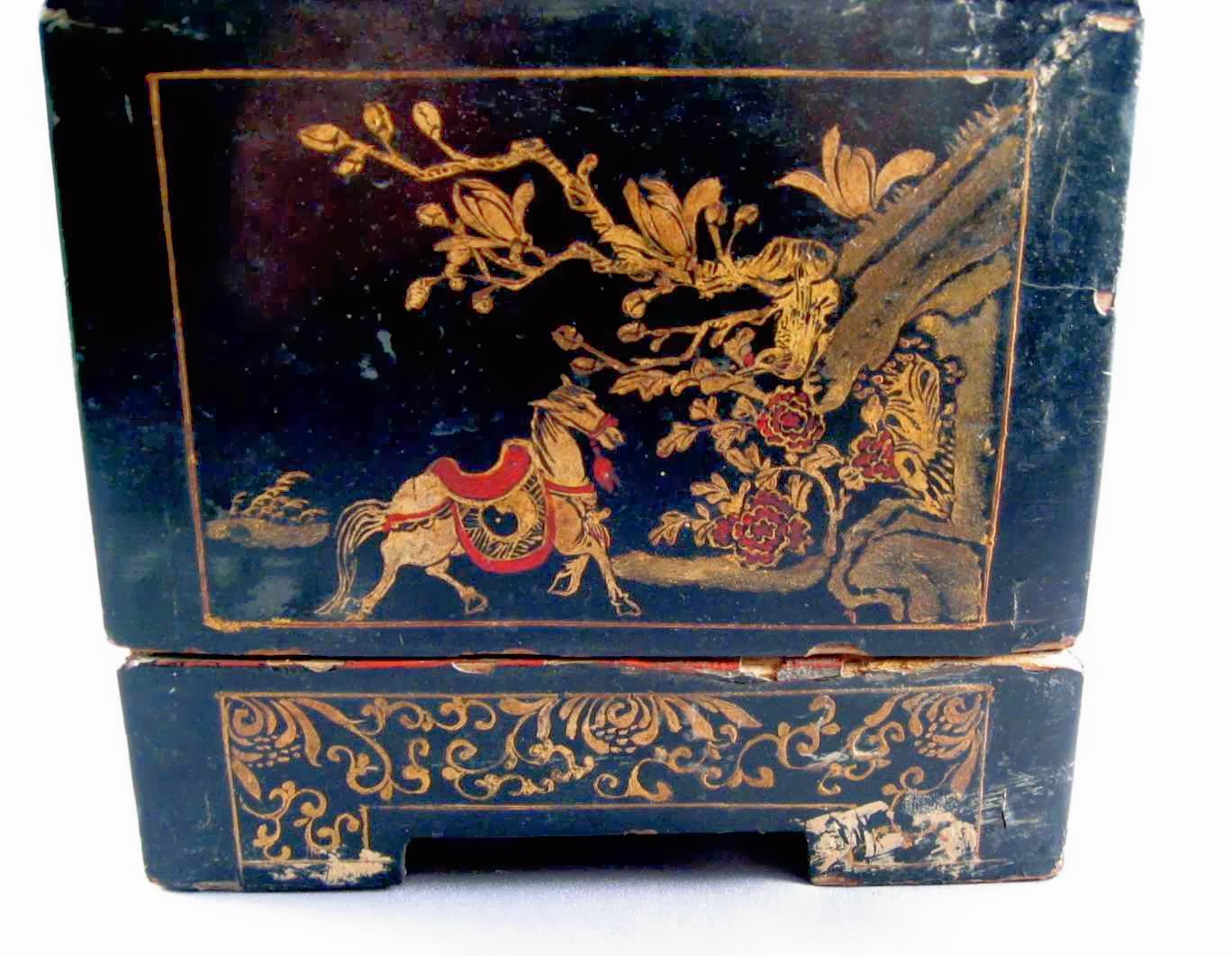 Here is a scene from the end of a wooden offering box, showing a horse that is saddled but without any rider. This makes a good transition to the second type of horse in Chinese art, those depicted as plain animals in more natural settings. 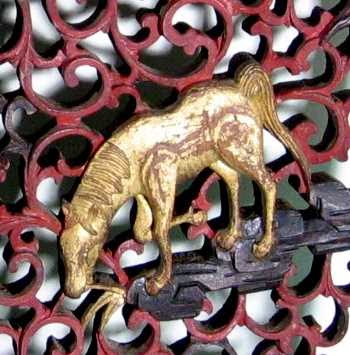 This carved pierced panel with its gilded, grazing horse has great appeal. The curlicue fretwork is very well done, and the red-gold-black color scheme is used to great effect, although very different from the mounted horse statue above. 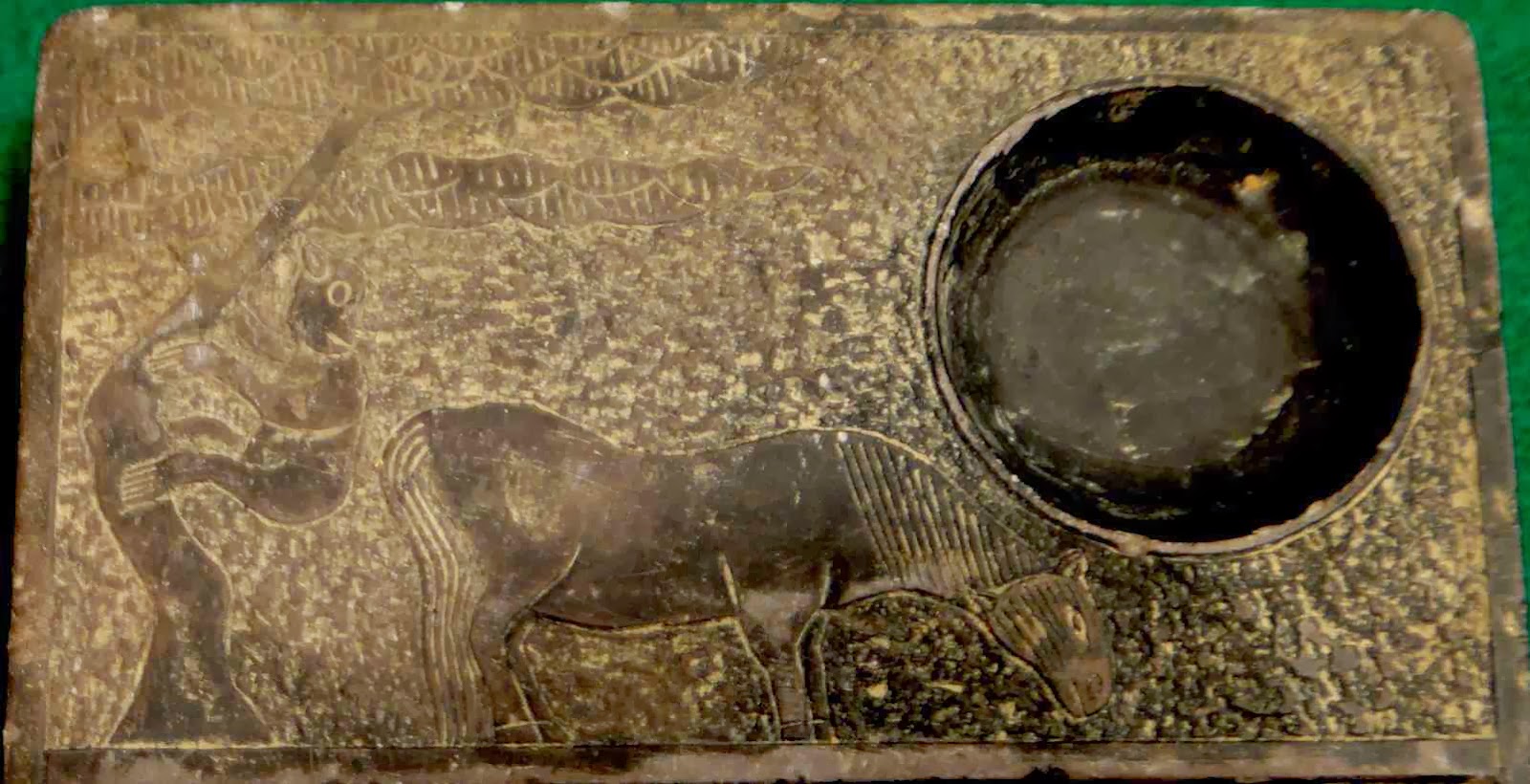 The scene carved in shallow relief on this inkstone has a charming folk-art quality. The horse is once again in a grazing posture, and the monkey in the tree seems about to jump on his back, and looks very pleased with his plan. 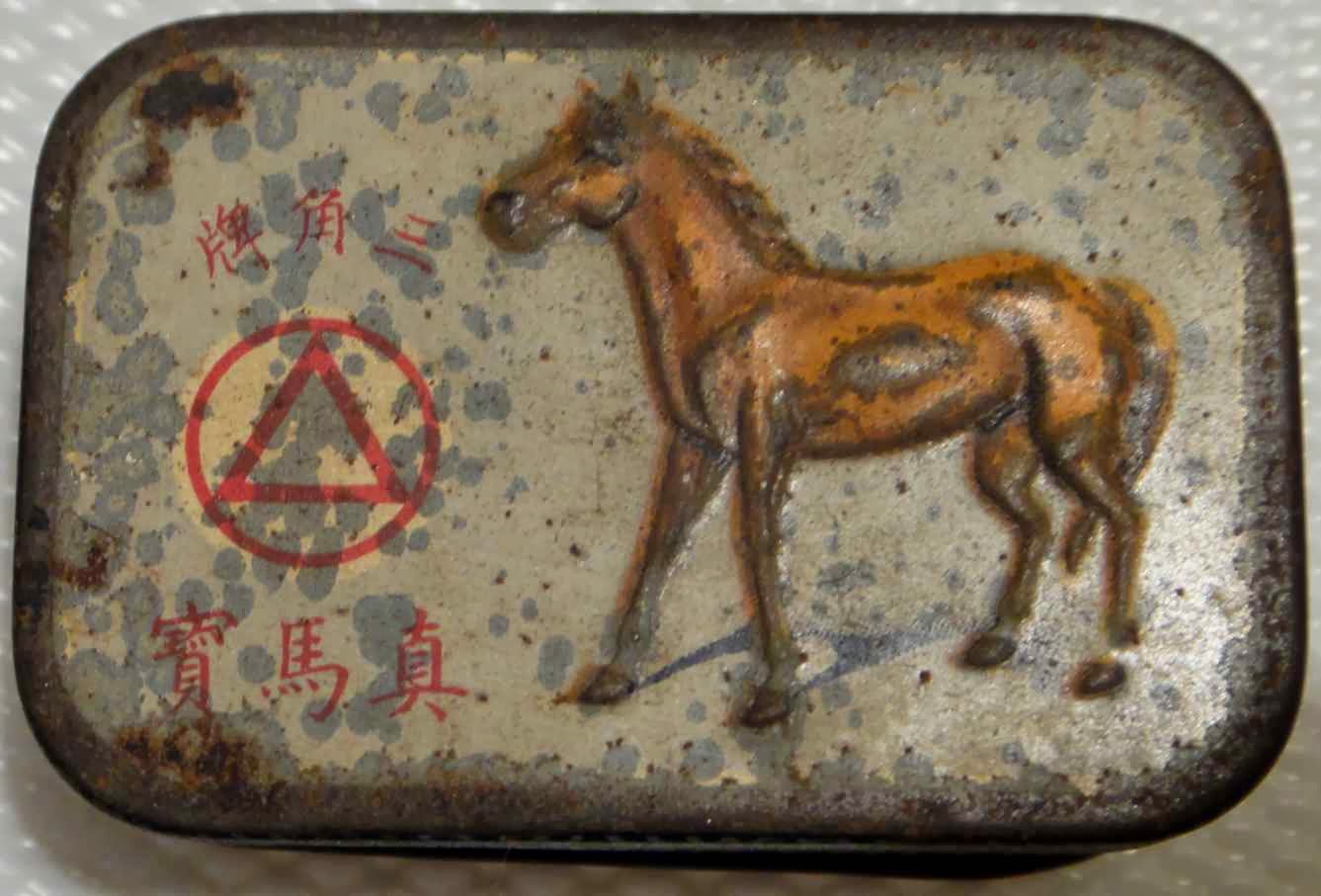 Finally, here is the top of a small medicine container, embossed with a horse. The still-sealed tin contains Triangle Brand ‘genuine horse bezoar’, a kind of stone formed in the horse’s digestive tract, and which is used in traditional medicine.

These few examples barely scratch the surface of horse imagery. If you have a favorite among those depicted, let me know in the comments. Horses in Chinese culture, similar to those in the West, can symbolize battle-readiness, importance, power and speed, as well as nature and freedom. Embodying all these qualities, this Horse Year is bound to be an auspicious one.

Happy Year of the Horse!

(All photographs and original articles property of the author.)
Posted by Parnassus at 9:49 AM 25 comments: