Today, January 23, 2012, is officially the start of Dragon Year. Dragons are auspicious in Chinese culture, so Dragon Year should be a lucky one. Dragons are common in place names, personal names, and brand names, and their images are everywhere. If you enter a Chinese temple, you will see thousands of dragons deeply carved on every surface.
The word dragon (long) is used to name many everyday objects in Chinese. Translating literally, a faucet is a dragon’s head, a tornado a “dragon spinning wind”,  a lobster is a “dragon shrimp”, and a dinosaur is a terrifying dragon. The common longan or longyan fruit is literally a dragon’s eye. It is similar to a lychee, but more transparent, so the dark stones in the middle show through, really giving the effect of eyeballs:

Chinese dragons are different from Western ones. More reptilian in their design, they are usually rather thin, wingless, and do not breathe fire. In recent times there have been some combined forms--I once saw in Taiwan a giant Santa's sleigh on the roof of a building, pulled by a huge fire-breathing Chinese dragon whose eyes lit up red (eat your heart out, Rudolph). Unfortunately I didn't have my camera that day.
Since my previous post on good luck charms concentrated on newer objects, I decided for the new year to look back at a few of the older dragons I have encountered in my collecting adventures. My opening post featured a carved wooden dragon, which was almost certainly the head of a cane.

At the top of this post is a gilt fragment from a dragon chair, showing three dragons cavorting among the clouds on top of a mountain. Can you make out all three? They are all looking upward and to the left, with their tongues sticking out. More substantial furniture also relied on dragon imagery, as in these wooden armrests below:

I mentioned the use of dragons in temples; smaller ritual objects used at home also employed the symbolism and good luck of dragons. This rather extraordinary small holder for sticks of incense is shaped as a red table, with a protruding gilded dragon’s head and claws. The dragon is proffering a lucky double gourd, and some of the metal incense tubes are still present. 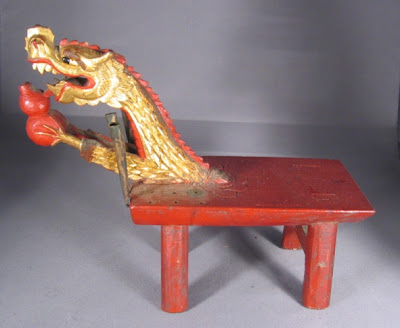 Here is an insert from a votive plaque, its intriguing inscription flanked by gilt dragons: 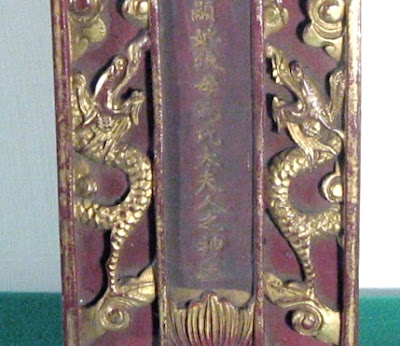 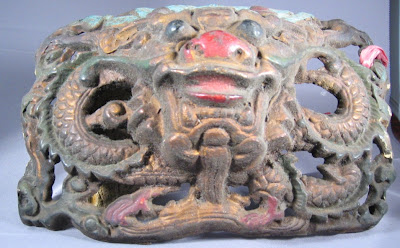 Not all dragons were indoors; some adorned the exteriors of public buildings as did this painted, cast-iron dragon face. This piece is fairly large, about a foot across. I am keeping my eyes open to see if I can spot any of these still in situ. 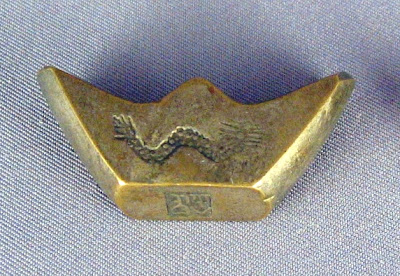 Here is the world’s cutest baby dragon, less than an inch long, stamped into the side of a brass yuan-bao. His whiskers, horns and scales are all evident, although I don’t see any feet—maybe this is some sort of larval stage. The Chinese characters on the bottom mean “pure gold”, which unfortunately in this case is merely wishful thinking.
It seems that nothing is officially Chinese without some reference to or depiction of dragons. Dragon Year is a good opportunity to look around and start noticing them in their great abundance. The only thing left to say is 龍年好, (long nian hao), Happy Year of the Dragon!

In America you will encounter the occasional lucky horseshoe or four-leaf clover, but in Taiwan good luck charms are truly ubiquitous. There are literally hundreds of different ones, and Chinese New Year is the time they are especially featured.

Many of the charms represent money, which in turn symbolizes prosperity in general. After all, what could be luckier than money? These money charms often take the form of actual coins, usually the old Chinese cash which were round with square holes, as seen above. Even more common than coins are yuan bao, the hat-shaped objects which were the traditional Chinese form of gold and silver ingots.
Jade bi (pronounced bee) like these were ritual objects in ancient China and pre-date coins. They are much used today, and because of their coin-like shape blend in well with other good-luck charms. Below some bi form a yuan bao, while others are printed to resemble coins.

Many fruits and vegetables are lucky. A yellow or orange color symbolizes gold and money, while many seeds indicate abundance and prosperity. Although they never existed in ancient China, sweet corn and peanuts are now so popular that they are as familiar in lucky charms as they are to eat.


Chinese years work on a 12-year repeating cycle, with a special animal for each year: Rat, Ox, Tiger, Rabbit, Dragon, Snake, Horse, Goat or Sheep, Monkey, Rooster, Dog, and Pig. This year (Jan 23, 2012 – Feb  9, 2013) is a Dragon year, so I plan to cover dragons more thoroughly in another post. Whatever year you are born in becomes your special lucky piece. For example, if you are born in a monkey year, then you are considered a ‘monkey’, and will always want to wear or display monkey charms.

You likely noticed in several of the photos that the charms are tied with elaborate knots, usually with red string. These special lucky knots are a traditional Chinese craft, and some charms consist of knots all by themselves. A couple of major lucky symbols that I cannot omit are ruyi, a kind of good-luck scepter, and bats, already covered previously.  Real firecrackers, useful in scaring away evil spirits, go off constantly during Chinese New Year, and fake firecrackers of all sizes are also seen everywhere:

These examples barely scratch the surface of Chinese good luck symbols. Let me know if you have a favorite good-luck charm of your own, either traditional or something that is your personal talisman. Here’s wishing all of you good luck and prosperity for the coming Dragon Year. 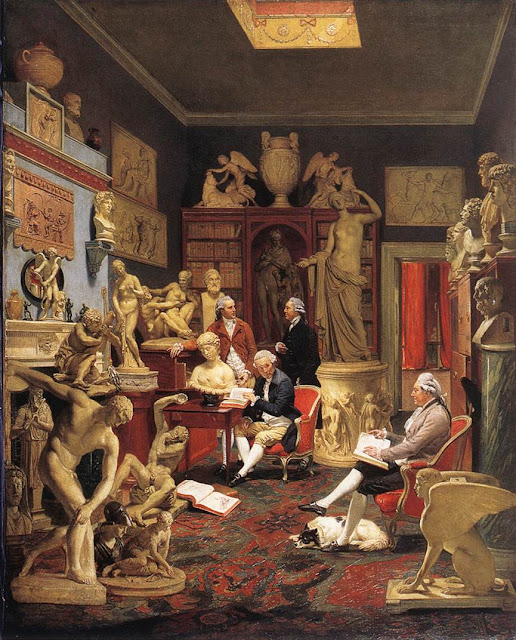 The paintings of Johan Zoffany, 1733-1810, are always eye-catching. Visually stunning and full of interest, they document much of Eighteenth-century life, especially in England where the German painter became established. His specialty was the “conversation piece”, a group painting of a family or group of people, often engaged in refined occupations, and often surrounded by their possessions.
If you are lucky enough to be in New Haven, Connecticut before February 12, be sure to make a point of stopping by the Yale Center forBritish Art to see its new exhibit, Johan Zoffany RA: Society Observed. Afterward, the Royal Academy of Arts, London will host the exhibit from March 10 to June 10, 2012.
What I find so appealing about Zoffany is the surreal quality of his paintings. In an effort to display every valuable possession of his patron, he crowds them into the scene, regardless of their actual locations and arrangements in the house.
The painting above of Charles Townley in his Sculpture Gallery is a famous example. We get the point that Townley was a major collector of Classical sculpture, while in the painting Townley and his friends (the conversation group) seem to be serenely unaware of the encroaching statues. (Note, the spellings Townley and Towneley seem to be freely interchangeable.)
The unreal effect derives partly from the crowding, and partly from the odd juxtaposition of objects—all of the objects are real, but we don’t expect to see them together like that. Here is a watercolor of the Townley collection that shows a more realistic disposition of the objects in his London House: 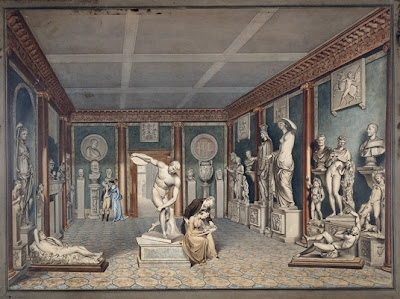 The Townley Collection later became the foundation of the British Museum’s classical department, where it remains. Here are a few of the Museum’s Townley treasures that can be spotted in the Zoffany painting: 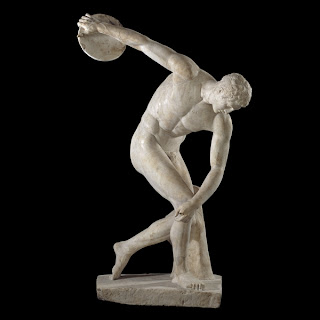 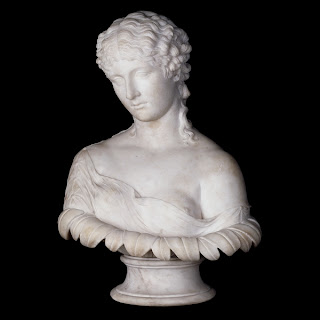 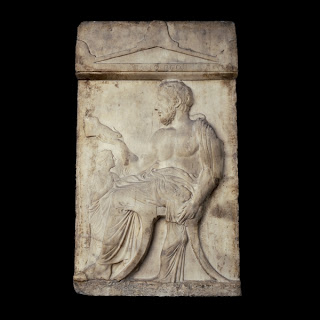 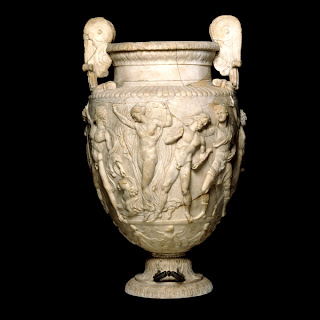 A similar effect of an odd perspective to display a multiplicity of objects was achieved in Egyptian art when showing tables piled high with offerings for the gods or pharaohs. This is also just a convention; it is the Egyptian artists’ two-dimensional way of rendering the items spread out over the table top. Sometimes the offerings are surreally floating in space, so that each separate item is featured clearly. 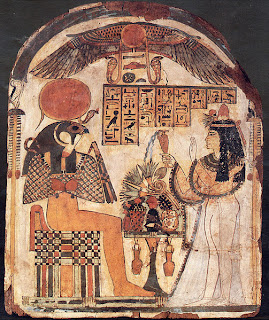 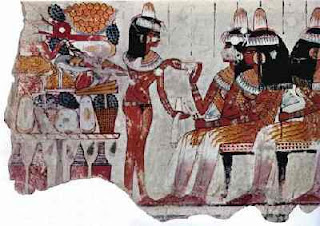 The Townley gallery was relatively empty compared to Zoffany’s depiction of the treasures of the Uffizi, which simply leaves the viewer stunned: 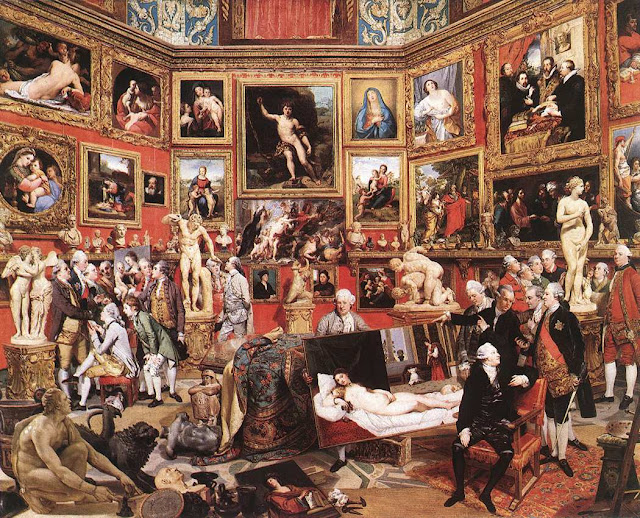 While the actual Uffizi and the Townley house were not quite so stuffed, a Zoffany-like effect of massed objects was achieved for real in the well-known Sir John Soane house in London, now a museum: 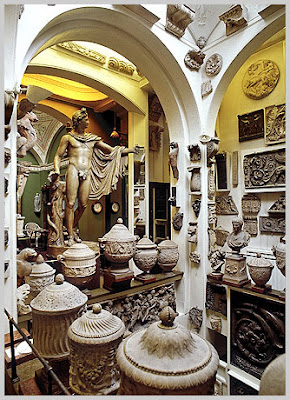 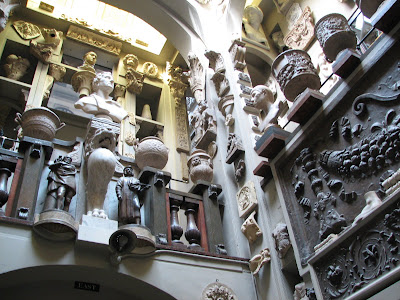 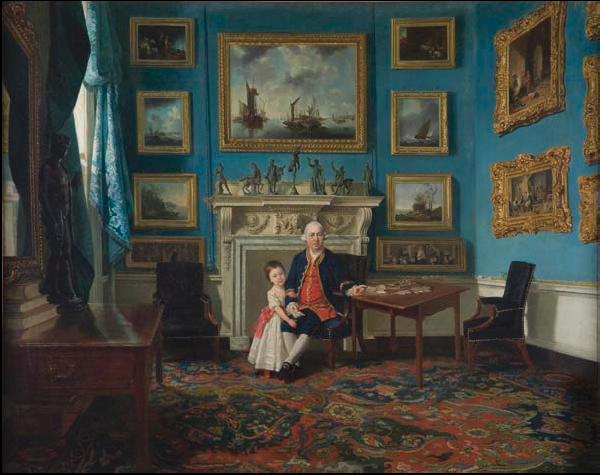 This handsome room is not crowded and distorted. The painting draws us in because of the interesting “pictures within the picture’, and the nice contrast of the bright blue walls with the gold-framed paintings. The bronze statues on the mantle echo the shapes in harbor-scape above.
Looking a little deeper, we start to notice more subtle symbols. Initially, our eyes are drawn to the bright hue of the background, and to the two human figures. However, in the painting, the object closest to the viewer is the drawer handle on the dim table in the foreground, as though inviting us to open it up and discover its secret.
Furthermore, after registering the appealing affection between the child and his grandfather, we notice that Sir Lawrence does not look at his grandson, but is pointing to the empty chair pulled back from the other side of the table, and the letters and inkstand that face that chair. Was he simply interrupting his letter writing to visit with his grandson, or is there something deeper being symbolized here? 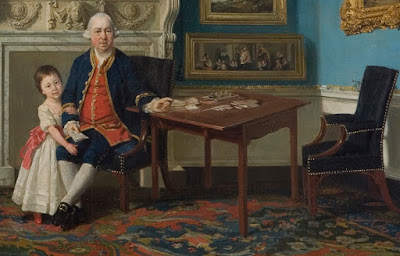 It is these intriguing details that make Zoffany’s paintings so appealing. There is so much to look at and discover. Each object is wonderful in itself, but there is a hidden meaning and lesson attached to each that we can ponder.

Is the oddness of so many Classical sculptures in an English house a criticism of unrestrained rapacity, or a tribute to Townley’s perspicuity in gathering this rare collection?  What is the mystery of that empty chair? This combination of accuracy and social commentary makes each Zoffany painting a time capsule of Eighteenth century taste and life.
========================================================
All Zoffany images, except for the Uffizi, courtesy Yale Center for British Art.
Posted by Parnassus at 12:30 PM 20 comments: