Everyone has seen those toy pinwheels whose handle is a clear plastic tube filled with candy. I have also seen them with other toys on top, notably colorful, pose-able hands. These fun toys did not prepare me for what was in the store the other day: 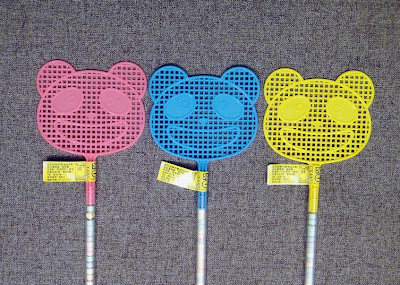 The candy-filled fly swatter. Perhaps the idea is that if the sugar in the candy attracts flies, then you will have a way to dispatch them. 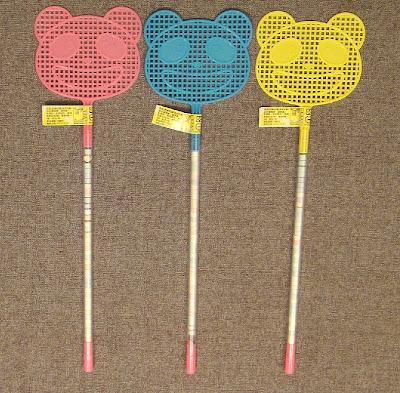 It is difficult to think of a less appetizing complement for candy than a fly swatter. 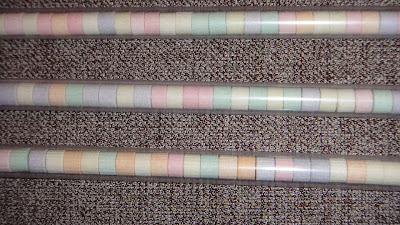 The candy itself reminds me of those sachet pellets my mother once put in drawers and linen closets. That was years ago, but still when removing drawers from chests, we sometimes find those little pellets rolling around inside. I didn't suppose at the time that they were making any impression at all, but coming across them now strongly evokes pleasant memories of the house I grew up in.

I’m not sure if anyone is going to form similar nostalgic memories of these candy fly-swatters. Let me know if you have seen a similar-level product that was yet more appalling. The real question is that now that we have candy fly-swatters, how will the designers crown this achievement? The fact that we know that they will try makes an adventure of walking into the store every day.
Posted by Parnassus at 4:07 AM 4 comments:

Now is the time for Lantern Festival, which marks the end of Chinese new year. Figural lanterns are made by stretching colored paper or fabric over wire frames, and lit from within. Spectacular displays are set up in public areas, and in the evenings, huge crowds go strolling to watch them. 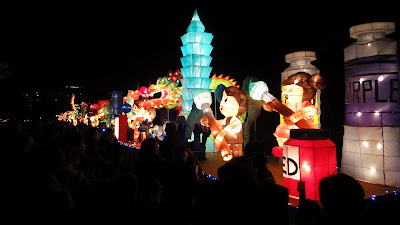 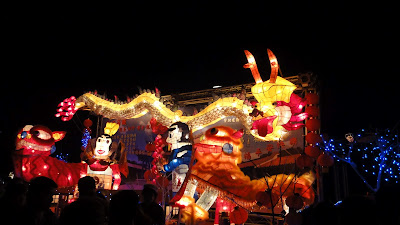 Since this is the Year of the Dragon, many lanterns are dragon-themed, although even in other years dragons are always a popular subject. 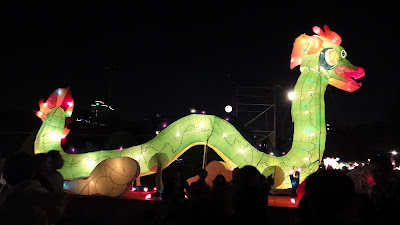 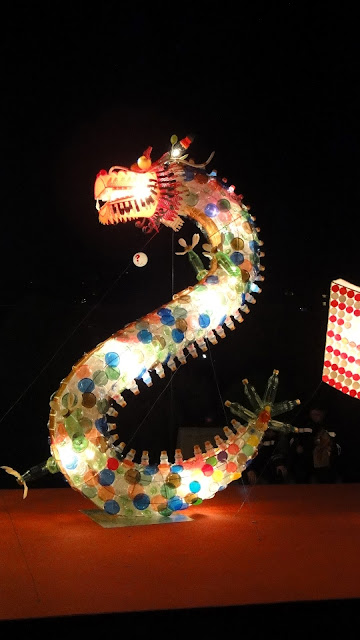 The above dragon is made from recycled bottles and drink-cup lids. Recycled materials are very popular for making the lanterns. 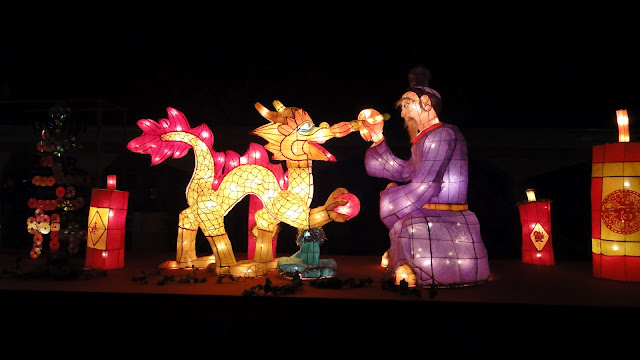 To give a better idea of the variety and effect of the lanterns, I am including a lot of illustrations, and very little explanation, so please just scroll through and enjoy—let me know which one is your favorite. 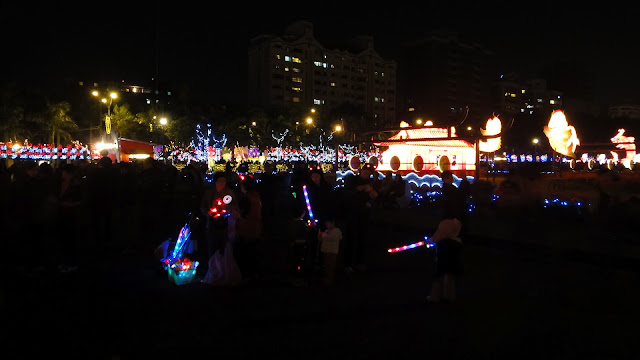 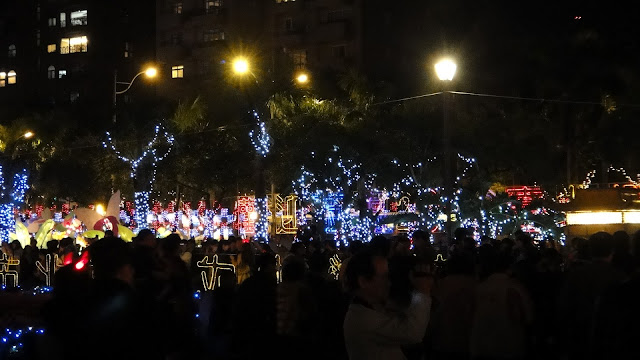 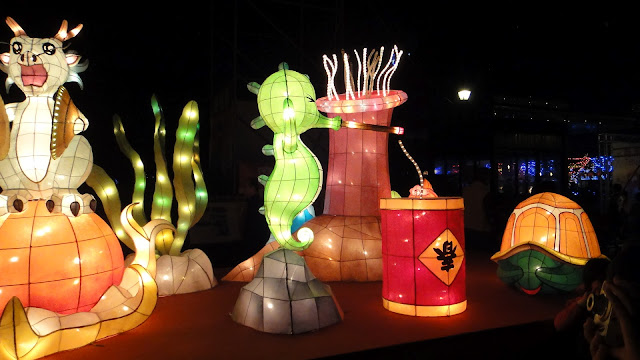 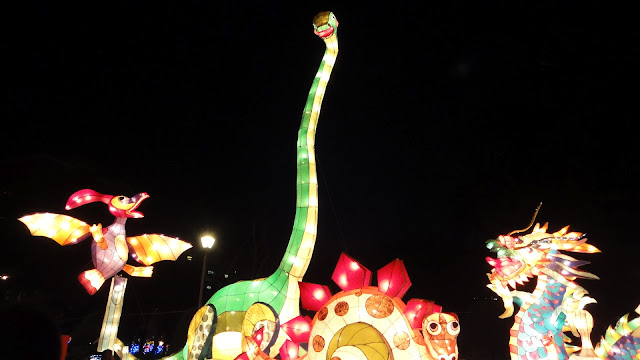 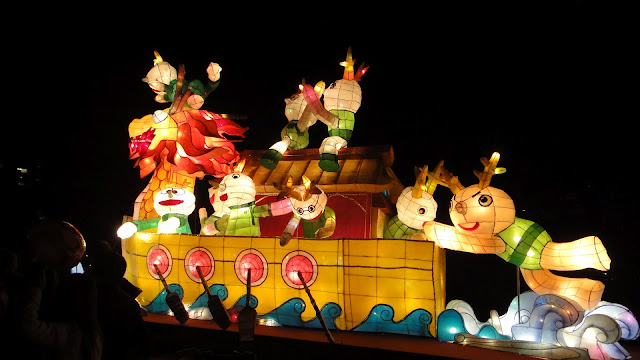 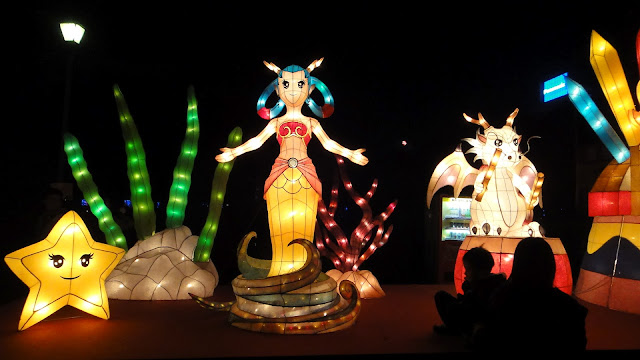 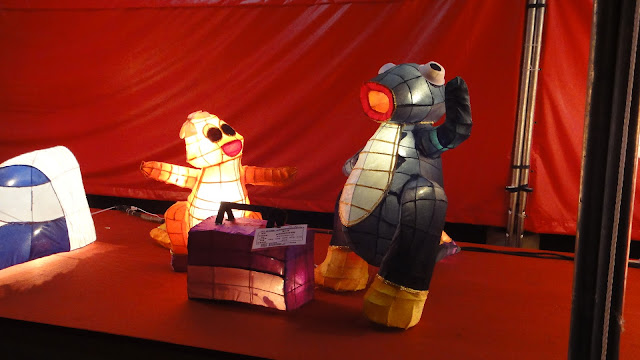 I don’t know whether this is supposed to be a dinosaur or an alligator, or what happened to its snout—there seems to be an epidemic. 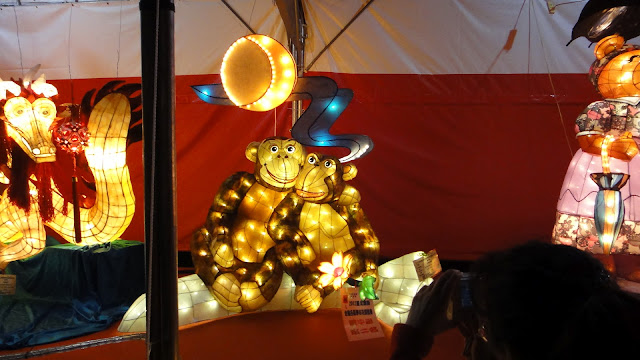 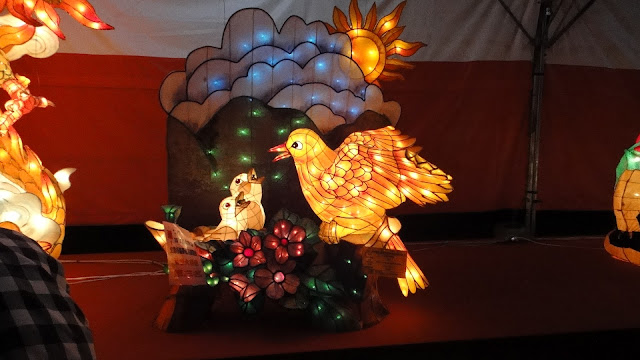 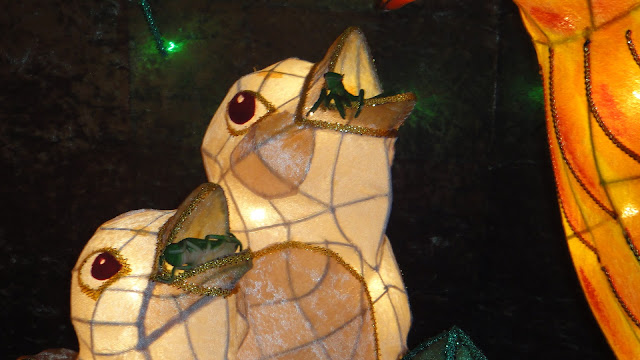 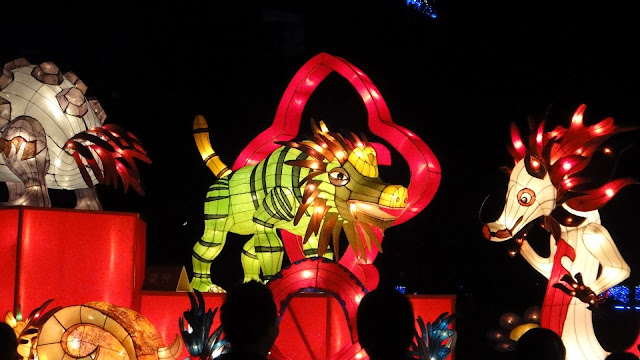 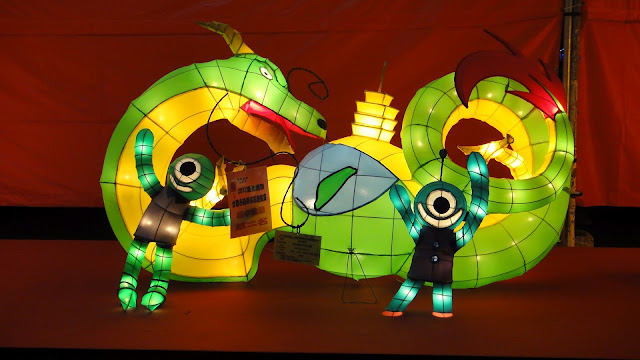 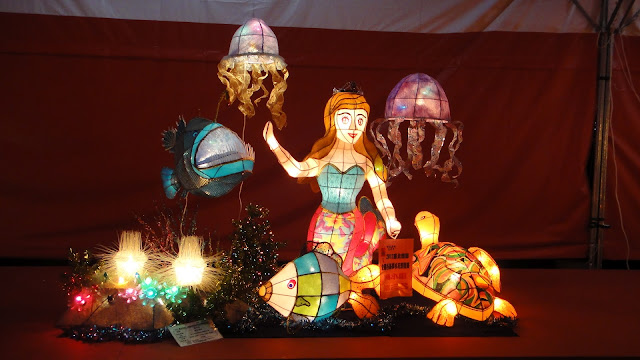 (All above photos by the author.)

There is another type of lantern known as sky lanterns, which are like little hot air balloons.  Prayers or lucky wishes are written in red on the sides, then the fire is lit and the lanterns go soaring up to heaven. It is a dramatic and beautiful sight to watch them rise into the sky.

The small reserve of fuel is supposed to be exhausted quickly, but often the wind tips the lanterns as they are rising, and the paper shells burst into flame and come plummeting back to earth. If I were a property owner I would worry about the fire hazard, but I guess people figure that if buildings can survive the Taiwan electrical and building codes, not to mention the fireworks from the first part of Chinese new year, then the mere application of direct flames isn't going to cause any additional harm.

An Astronomical Coincidence at Old Vassar

Recently I was doing a little research on Abbott Lowell Cummings, the famous architectural historian. Cummings is well known as the director of the Society for the Preservation of New England Antiquities (SPNEA) for many years, and author of works on early New England architecture.
In an interview conducted when he was given the distinguished Henry Francis duPont Award, sponsored by the Winterthur Museum, Cummings credited his grandmother, Lucretia Amelia Stow Cummings, with having greatly influenced his life: “She was a scientist by training, a Vassar graduate who had studied astronomy. She drilled into me the need to be very factual.”
This mention of astronomy at Vassar rung a bell. Although virtually all of my old photographs are in Ohio, I happen to have in Taiwan some early cabinet photos of Vassar College, including one of “Miss Mitchell, Professor of Astronomy”, and one of the Vassar Observatory.


It turns out that Maria Mitchell (1818-1889) was quite an interesting woman. Already a distinguished scientist who among other accomplishments discovered “Miss Mitchell’s Comet” in 1847, she later became the first instructor hired at the newly-formed Vassar College, in 1865.
In 1902, the Maria Mitchell Association was founded to honor her, and this society still operates her birthplace as a museum, as well as the Maria Mitchell Observatory and several other science museums on Nantucket. Wikipedia additionally tells us that she is in the National Women’s Hall of Fame, and that the WWII ship the SS Maria Mitchell as well as the Moon’s Mitchell Crater were named after her.


Miss Mitchell can  be spotted at the base of the observatory stairs. As an aside for the architecturally-minded, this close-up of the arch-top window in action reveals some construction details, and also how double-hung windows were opened from the top as well as the bottom to control ventilation.

It is easy to see why Lucretia Stow admired Maria Mitchell. Dean Rogers of Vassar’s Special Collections department kindly confirmed that Ms. Stow belonged to the Vassar Class of 1874, and that Miss Mitchell was the only astronomy professor until 1886.
Lucretia Stow Cummings herself has not been forgotten. Just last year in a special exhibit, historian Rebecca Edwards honored “Lucretia Stow, who sharply reduced infant mortality rates as head of Connecticut's Public Health Nursing Association, also led a campaign to improve the state's rural schools.”
It is interesting to contemplate the chain of influence involving scholarship, history, and activism, that started back in the early nineteenth century with Maria Mitchell, was transmitted to her student Lucretia Stow, and then in turn to her grandson, Abbott Lowell Cummings, who then influenced many at SPNEA, Yale and elsewhere.
(All original photographs belong to the author.)
Posted by Parnassus at 10:23 AM 8 comments: