Chinese wooden vinaigrettes, small filigree containers meant to be worn about the person to disperse perfume, are among the most exquisite of Chinese antiques. If you missed the previous post on silver vinaigrettes, please go there first to read the basics about these miniature works of art.

I apologize in advance for the large number of pictures, but these are among my favorite objects, and even after cutting down I still wanted to show some of the infinite variety in which vinaigrettes can be found.

Most of these are made of boxwood, which is a good fined-grained wood to take intricate carving. The rectangular ones are usually about one and a half inches long, excluding any lions on top. (The very last photo will better show their relative sizes.) Usually the top or bottom will come off to receive the scent packet, or there is a sliding panel on the narrow side. Many of these feature elaborate meander (including “Greek Key”) borders surrounding the central design.


We have covered many examples of vinaigrettes in wood and silver, but of course other materials were used, notably ivory, bone, horn, ceramic, gold and gemstones.

These tiny vinaigrettes were one of the agreeable surprises that turned up when I started collecting Chinese antiques. Do you have a favorite type of miniature collectible? Let me know if you have a favorite among those displayed today (I numbered the photos to make them easier to refer to), and whether in general you prefer the silver or wooden versions.

Note: All of the Chinese vinaigrettes shown are in the collection of the author, as are the photos.


Chinese artists often achieved delightful effects when working in miniature. One of my favorite collections of Chinese objects is the charming tiny vinaigrettes made of delicate filigree. These small openwork containers, filled with perfumed inserts, were meant to hang on the clothes when walking, rendering surrounding odors less offensive. Sizes vary, but a typical rectangular one will be about 1.5 inches long.

It is difficult to know what name to call these—vinaigrette, pomander, sachet, or censer. Censers are for burning incense, and typically of a larger size. Sachets are usually made of cloth, and in fact their Chinese equivalent is very common. Pomander perhaps is the closest, but the name can refer to the perfume itself, and often pomanders are spherical or larger than personal size.

I prefer the term vinaigrette because these most closely resemble the Western silver vinaigrettes which were used for a similar purpose. These usually contained ammonia salts and possibly aromatic vinegars in addition to perfume, so they were kept closed and only used as needed to revive the wearer in days when fainting spells as well as horrid odors were common. The Chinese version contained only perfume and they were made of an openwork material so the perfume could diffuse itself around the person, or could be lifted for more concentrated inhaling.

In general, Chinese silver vinaigrettes are made in two halves, which somehow hinge or fit together in order to contain the perfumed material, ordinarily a small pad made of cloth which can be charged with perfume or fragrant oil, whose scent can escape through the fine piercings. Some are made as a complete box, which can be opened at the top or by a sliding panel at the side. Since these sliding panels weren’t anchored to the main body, often they are missing today.


Most of the decoration on Chinese vinaigrettes falls into two categories—either floral/natural scenes, or vignettes from Chinese history and mythology. Either of these patterns allows for a lot of detail in the decoration, as well as small recessed spaces that can be punched or cut out for the filigree. 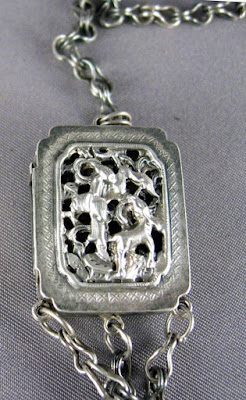 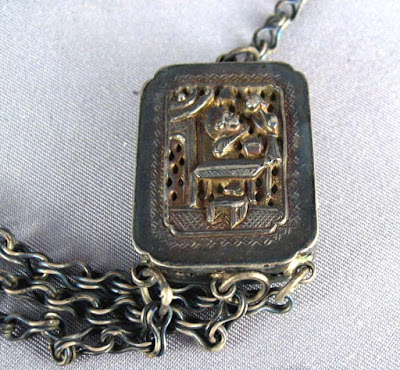 Virtually all Chinese vinaigrettes were meant to hang from the clothing. Usually the top and bottom panels were pierced to allow attachment of chains or cords so they could be hung from the belt with an array of other lucky charms and useful objects such as needle cases or seal holders.

However, many of the silver ones were used as the centerpieces for chatelaines, which were small assortments of useful objects bound together into one piece of jewelry, kind of like an early concept of the Swiss Army knife. Western chatelaines contained keys, pencils, notebooks, pin-cushions, watches, magnifying glasses, and so forth and were used by women and pinned on the chest or waist like a brooch. Chinese chatelaines, on the other hand, contained personal implements like tweezers, ear-picks, tongue scrapers, nail cleaners, etc. and were likely suspended from the belt like the other hanging charms.

Chinese vinaigrettes come in a large variety of shapes. My favorites are the rectangular ones, but they can be found in circular, cylindrical, spherical, octagonal, cartouche, and irregular shapes, among many others. They are also sometimes made as articulated fish or insects, with moving parts, but those I have seen of this type always seemed to be of recent manufacture. The round ones were particularly well suited to be used in chatelaines, and in slightly larger sizes could be made into hatpins or other jewelry.

I had made a display of these silver vinaigrettes in my apartment, but Taipei’s polluted and corrosive are tarnished them a difficult-to-remove black, so I had to put them away. There are many small collectibles here, but vinaigrettes particularly appeal to me, which is ironic since I cannot tolerate (and am perhaps allergic to) perfume. There is so much variety that it is difficult to pick just one, but let me know if you have a favorite example or type.