How Many Brass Mouthpieces Do You Need?


Last summer I was sorting through a box of brass instrument mouthpieces, placing them on a table as I unpacked them. My mother happening to come by asked me, “How many mouthpieces do you need, anyway?”

Of course, there is no limit to the number of mouthpieces I need, but what struck me about her question was that although they may appear similar, there are worlds of differences between mouthpieces that make ownership of many of them not an idle whim, but a vital necessity.

I like to play old brass instruments, especially the cornet and the alto horn, and each mouthpiece has its own qualities and merits. The difference they can make in the playability and sound of each instrument is almost unbelievable. This is in addition to their different appearances and historical associations.

The mouthpieces they make today can be very high quality, but may be very inappropriate to use with old instruments. This is especially true for cornet mouthpieces, which used to be conical in shape, and gave a more mellow sound. Today’s cornet mouthpieces are more like miniature trumpet mouthpieces, featuring a cup-shaped interior, and give even antique cornets a more brilliant, trumpet-like sound, which is at odds with old cornet music, which, while capable of brilliance, revels in its moonbeams-and-roses, Victorian atmosphere.

The late 19th and early 20th century were the golden era of brass instruments, when every town had its own brass band, and cornet and trombone soloists such as Jules Levy, Herbert L. Clarke, and Arthur Pryor were all household names. Many old mouthpieces feature the names of premium manufacturers, and were modeled after the preferences of the famous brass soloists of years gone by.


When you obtain an old brass instrument, you should gather as many historical mouthpieces as possible, and see which ones fit the instrument, your anatomy (embouchure), and personal playing style. Here are a few particular ones from my collection:

How does one acquire so many examples? When I was in college, I used to stop in at older-looking music stores and ask if they had any old mouthpieces lying around. They usually came up with a box of miscellaneous parts and junk from the back room from which I could choose; some real treasures turned up this way.


If you play a wind or brass instrument, did you have a special mouthpiece that made all the difference when playing it? What about brass instruments in general—do you have a particular favorite? Although I most often play the alto horn, my real favorite is the old-fashioned cornet, especially when played by the likes of Jules Levy, Herbert Clarke, or Bohumir Kryl on early records.

You are supposed to blow horns to usher in the New Year. I hope that this post will get everyone in the mood, and that all my readers have a happy, healthy and prosperous 2018!

All mouthpieces and photos of same property of the author.
Photos of Pryor, Levy and the Serpent via Wikipedia.
Photo of Innes located here.


Tea is one of the great passions in Asia, with many specialized varieties of tea leaves grown, and many ceremonies and specialized utensils developed for serving and drinking it. Tea leaves could be very expensive, and the need to protect them from dust and humidity resulted in the development the storage vessels known as tea caddies or tea canisters.

Last week’s mystery object is a pewter egg-shaped tea caddy. Tea caddies were made in many shapes, flask and cylindrical shapes being the most common. This egg-shaped caddy is a bit of an oddity, probably intended for export. The lid flips back, and there is an inner small canister that contains the actual tea. 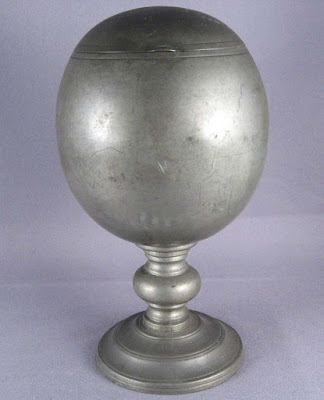 Congratulations to Rosemary, Mrs. D., and Anonymous, who correctly identified that this object was meant for tea storage. Some people perhaps got too interested in the novelty egg shape, which colored their guesses.

I thought that those of you who read Meg Fielding’s renowned Pigtown Design blog would all get this, as recently she has been posting about a special exhibit of tea caddies in Baltimore (running until December 31, 2017 in Johns Hopkins' beautiful Homewood Mansion Museum), and I even made a comment there about pewter examples.

As the Homewood show demonstrates, tea caddies, especially those used in Europe or America, were made in many materials, frequently ceramic, silver or wood. However, in China pewter was a common choice—it can be made with a convenient wide mouth that seals tightly, and is certainly less expensive than silver.

It is important to note that most old pewter contains lead, and while new pewter can be lead-free, I would not recommend using antique pewter containers for tea leaves or for any type of food storage.

My egg-shaped caddy looks like it could have been derived from one of the silver examples from Mark Bramble’s collection that Meg illustrated. Although this is the only egg-shaped caddy I have seen, there is a more common design shaped like a globe, with a crude map of the world engraved upon it. I have seen many of these in a broken condition, and I prefer my plain model with its smooth, gray patina. 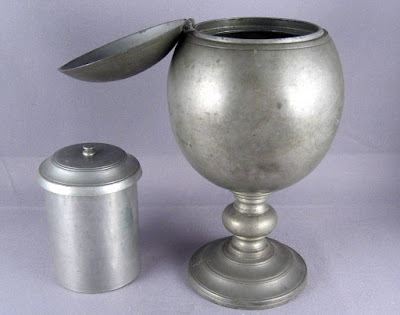 This inside view of the caddy should clear up the whole mystery. Of course, caddies were usually sold empty, and while you could put whatever you wanted to in them, these were really intended for tea, and there is a large tradition behind them. Some people suggest tobacco or snuff as alternate uses, but these materials have their own traditional containers. I have often seen old tea caddies with the tea still in them, and likewise tobacco and snuff containers, but have never encountered a specialized container with the “wrong” substance in it.

Chinese pewter objects are often hallmarked, and unlike tiny silver hallmarks, the pewter ones are large (about an inch square) and usually well stamped or cast. The round shape and English spellings on this hallmark in addition to the Chinese characters are a clue to its early 20th century origin, perhaps from the 1920’s or 1930’s. 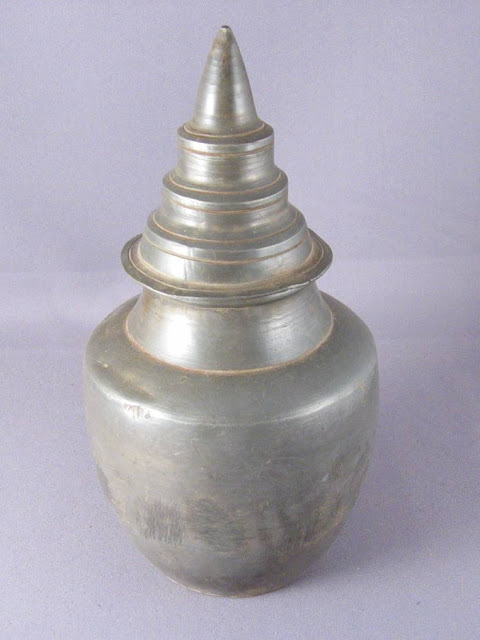 A more common shape was a pewter caddy like the above one with the top resembling a pagoda or stupa. Figural shapes were perhaps meant as novelty gift items; the pewter ones used by serious tea aficionados were often plainer in form.

One exceptional tea caddy in my collection is this giant, vase-shaped example. In addition to its outstanding patina, it features a top knob made of glowing blue Peking glass, held in place with a pewter rivet.

Finally, there is perhaps my favorite pewter tea canister, this plain cylindrical model. While this shape was very common, many of them have an overall embossed or engraved pattern. I prefer this plainer surface. Note, however, the high quality built into this caddy. There are simple, finely engraved double lines around the top and near where it opens. The fit of the top is so excellent that the actual dividing line between lid and caddy is hard to see. The top is not flat, but gently domed, and there is a very slight overhang which, added to the barely projecting base, lends subtle interest to the silhouette. 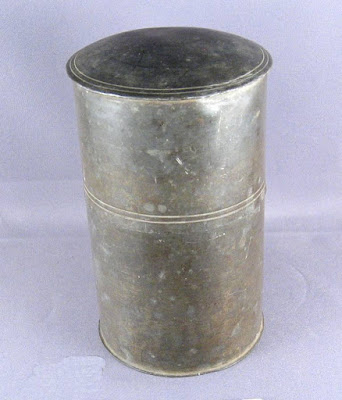 Old pewter is hard to photograph, at least for me. The flash or spotlight makes mellow surfaces look harsh, and magnifies each imperfection. Antique pewter left unpolished  has a fascinating soft, gray patina that is quite irresistible. 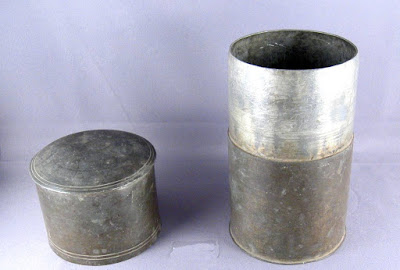 Although made of soft pewter, the fit of the lid is tight and exact—notice how shiny the protected metal still is. Also, the long overlap between lid and body helps to insure an airtight environment for the precious tea leaves inside. This is a well-designed can.

Tell me, do you like these pewter tea caddies, or would you prefer the ceramic or wooden models more common in the West? Of the four caddies presented here, which one would you most like to store tea leaves in, assuming they were made of modern, lead-free pewter!

All photos and objects depicted are in the collection of the author.