Happy Year of the Chicken, Rooster or Phoenix!

One value of multiculturalism is that instead of just a single New Year, we can now select from a variety of New Years in order to get multiple chances at a fresh start and a clean slate, each celebrated with its own rituals and customs.

Today (Friday) is Chinese New Year’s Eve for the year of the Chicken or  Rooster.  The shops are full of merchandise, mostly red and gold, to help celebrate the occasion. Every variety of good luck charm can be found in abundance, many of them with the current year’s animal worked in.

My souvenir purchases for Chicken Year year were rather modest, a stuffed chicken for a very young friend,  and some tiny chicken bells strung as cell phone charms to hand out with the traditional Red Envelopes, given out to the younger people. 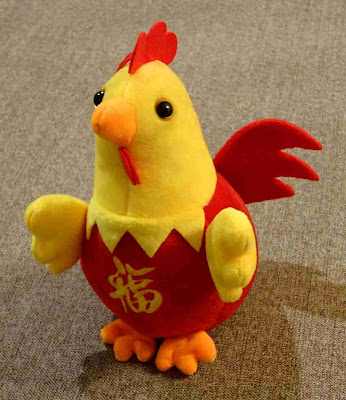 Sometime chickens are replaced as a New Year’s animal by the mythical bird, the Chinese phoenix, and I would like to concentrate on that association, as phoenixes are so often represented in Chinese art. Chinese phoenixes symbolize peace, luck and marital harmony. They are often paired with dragons as yin-yang pairs, the phoenixes representing the feminine yin as opposed to the masculine yang of the dragons.

Here are some lucky silver phoenix badges from the baby carriers that were illustrated in an earlier post. These balance the dragons on the same pieces, while imparting their own type of luck and symbolism. 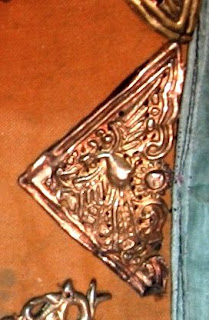 Temples and other traditional Chinese buildings often include phoenixes among the elaborate woodwork. On this quite large and very old pair, holding peonies in their beaks, you can see where they were dovetailed to the beams. 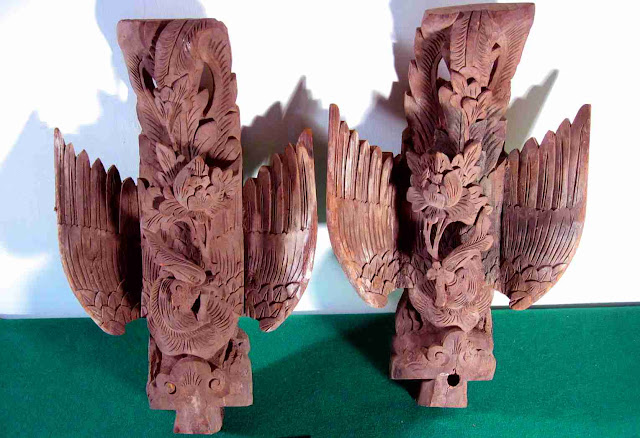 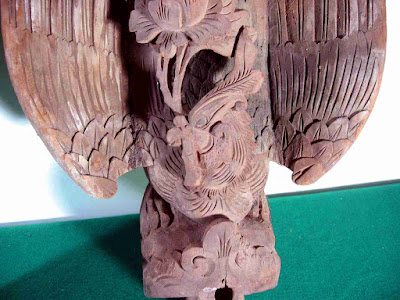 Finally, here is the top of an inscribed plaque that would have been placed in a base on an altar. There are also two dragons going down the side, further framing the text. 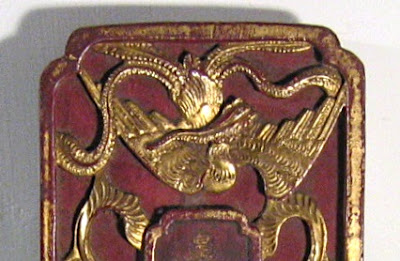 This year seems a particularly needy one for the phoenix to practice its charms of peace and harmony. I wish you all a happy and prosperous  Year of the Phoenix, Rooster or Chicken.

Note: All photos and original items property of the author.
Posted by Parnassus at 9:38 AM 28 comments: