May Your Halls be Filled With Gold and Jade

“May Your Halls be Filled With Gold and Jade” is a common Chinese New Year greeting, and one that can literally become true if you happen to have a Chinese lithographed tin house bank like the one below. This object combines many of my favorite collecting interests: houses, toy banks, lithographed tin objects, and Chinese antiques. 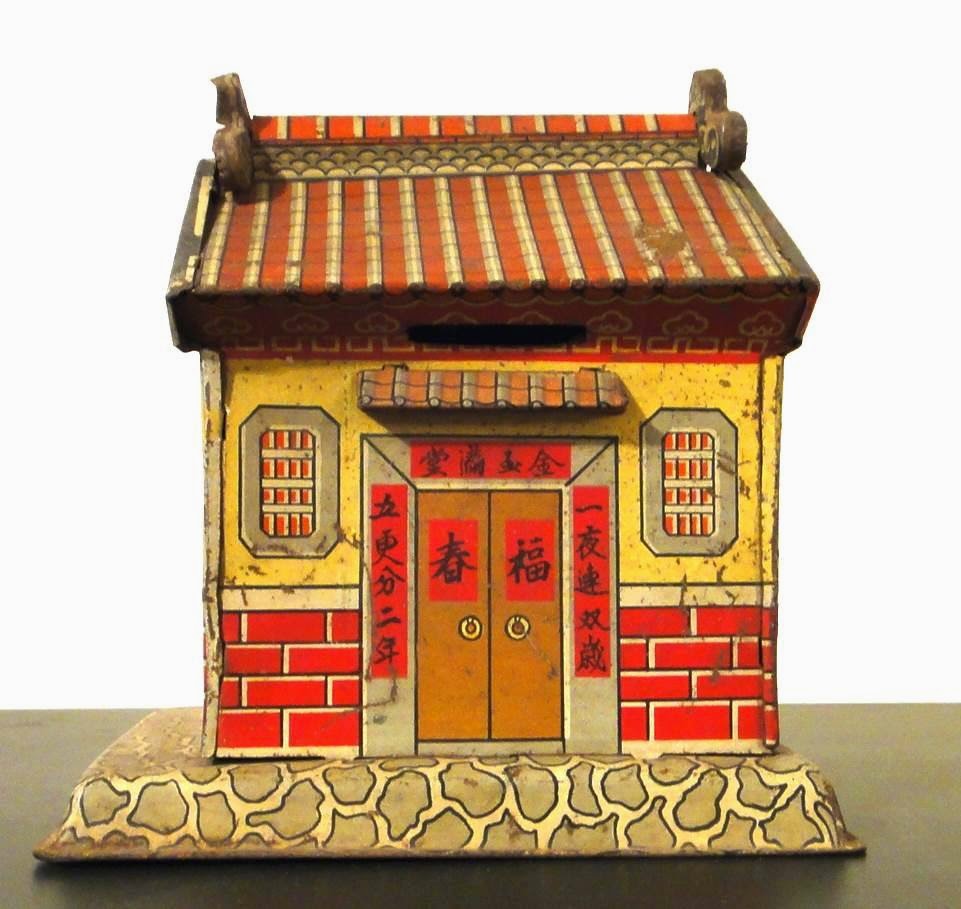 This bank represents a traditional Chinese house, the type that can still be found in the countryside and occasionally in the city. The construction is of large bricks, with stone windows. On top is a tile roof with an elaborate crest and decorative gable ends. These fancy elements on real buildings are often picked out with colorful glazed tile work, as indicated on this model. A favorite detail is that it sits asymmetrically on its cobblestone base, thus giving it the tiniest of yards.

Chinese New Year is under celebration in this tin house, indicated by the red papers, inscribed with auspicious sayings, pasted around the doors. These red papers are still to be found absolutely everywhere, on old buildings as well as new ones. Touchingly, even when these old houses are crumbling and uninhabitable, the owning families will return each year to the family seat and paste up fresh red papers.


The real house above in Taoyuan County (near Taipei's International Airport) closely resembles the tin example, down to the stone courtyard and lucky red banners. On the doors of this bank are the single characters for Spring and Luck, as Spring Festival is the alternate and more traditional name for Chinese New Year. Here they are displayed right side up, but it also is traditional to display them upside down.

Above the doors is the banner hoping that the house will be “filled with gold and jade,” with the coin slot located conveniently just above. This greeting is still in frequent use; there are also variants wishing you “gold and silver” and even just plain gold.


The two vertical side banners convey a specifically New Year’s sentiment. On the right it says, “One night joins two paths” and on the left “The dawn separates two years.” The word used for path, wai, suggests the kind of twisting paths found around mountains and rivers, thus symbolizing the preceding and coming years. Instead of the actual word for dawn, the adage interestingly employs the term “fifth watch,” using an ancient Chinese system for dividing time. The night, roughly 7:00 PM to 5:00 AM, was divided into five watches, with the fifth watch covering the period from 3-5:00 AM, which was considered the true dividing line between the days. 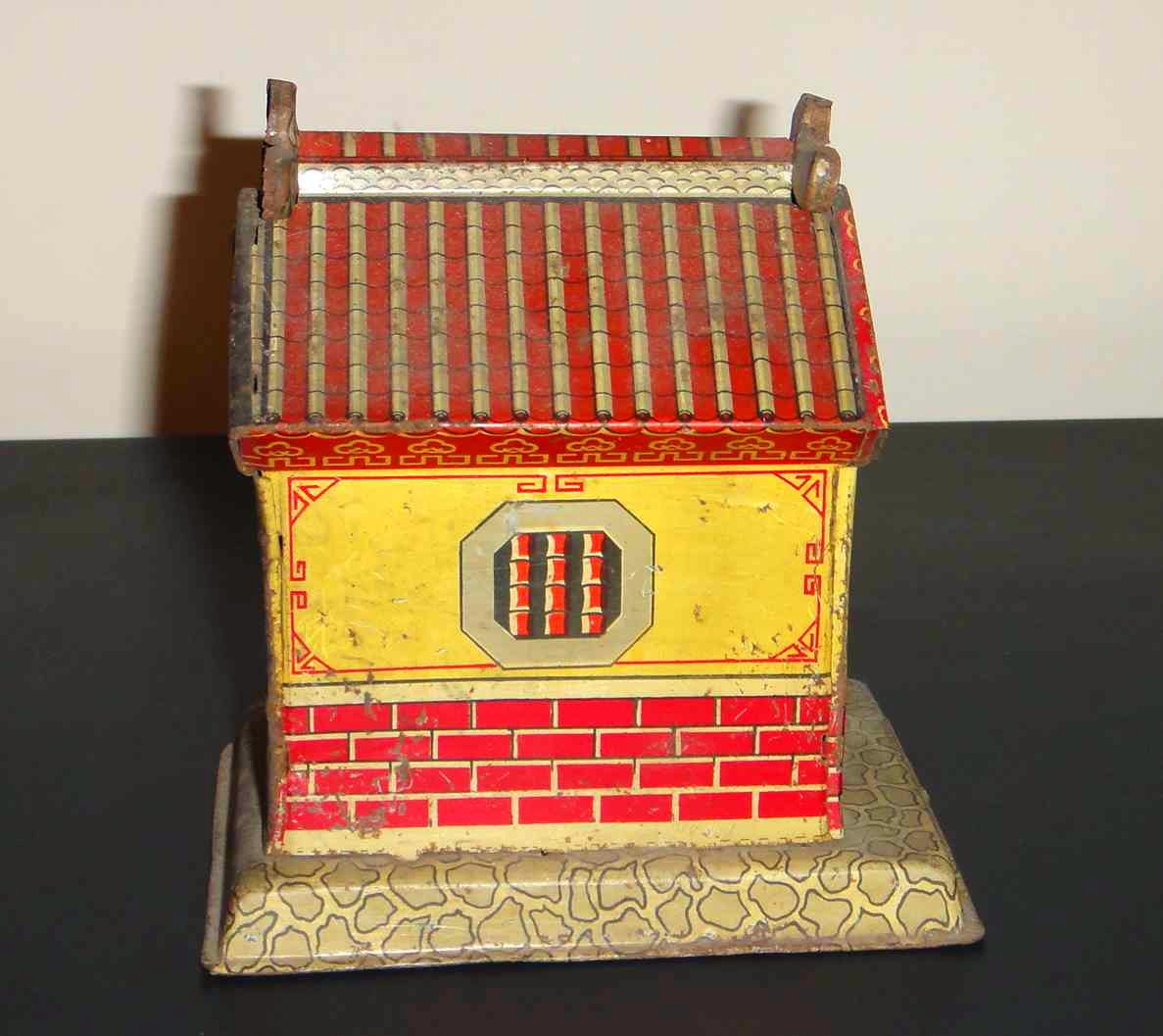 The back of the bank features a stone window set with vertical bamboo posts. The actual posts in these frequently seen windows are either stone carved like bamboo, or sometimes colorfully glazed terracotta.


When I was small, my father collected toy banks, both tin and cast iron, and family excursions hunting for these were my introduction to collecting, so I was doubly pleased to find this traditional Chinese example. Let me know if you ever had a favorite toy bank, or special container for saving coins.

Chinese sayings often wish the recipient wealth and prosperity. Their presence on a coin bank helps to guarantee this by teaching the virtue of saving money. However good fortune arrives, here's hoping that your halls this year will be well filled with gold, silver and jade, in addition to peace and health. 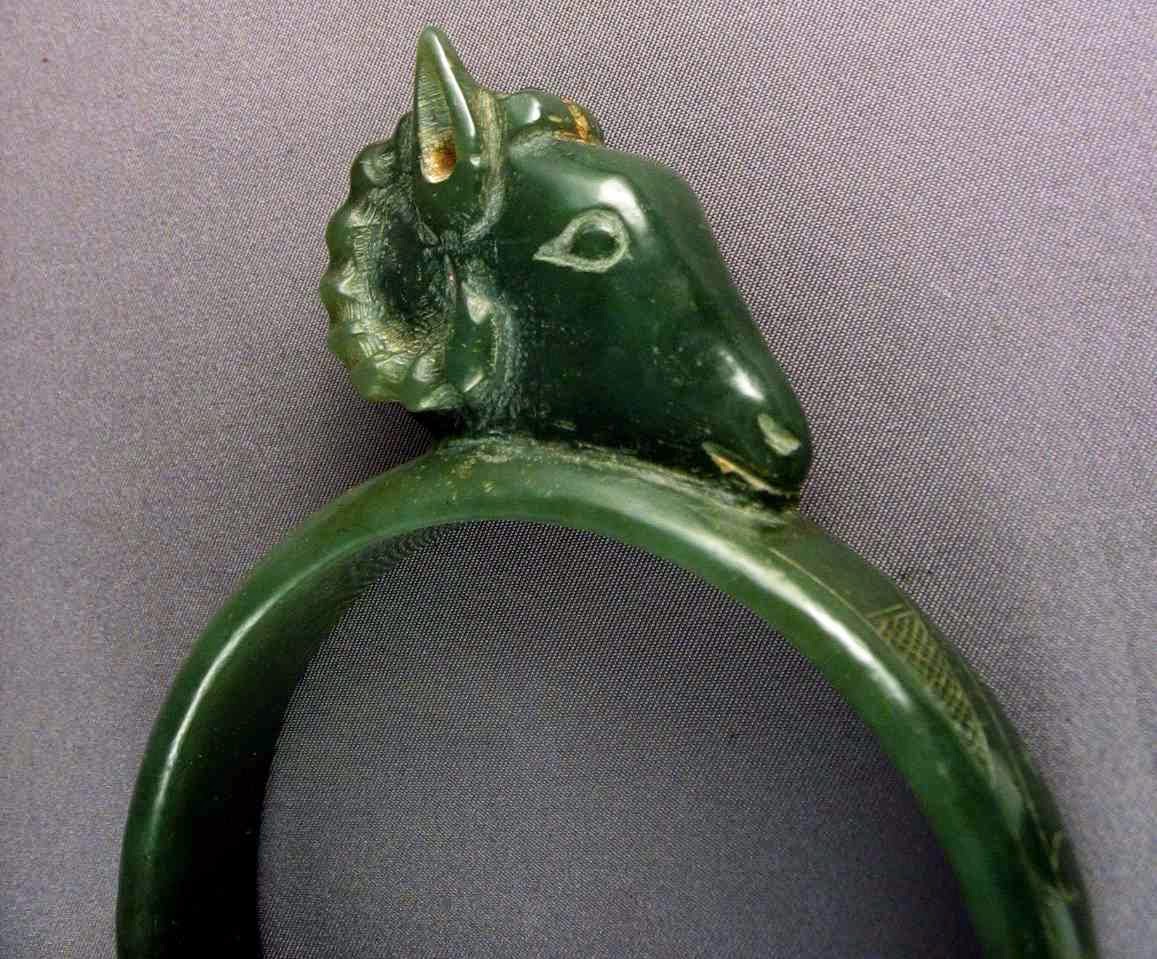 Thursday, February 19th is Chinese New Year Day. This year is the Year of the Goat, but the same character can also mean sheep or ram, so you have considerable leeway in deciding how to celebrate. These animals are very much a part of Chinese art, found in many forms and media, but even accepting all three alternatives does little to eliminate the possible confusion. This ceramic goat with its raised head and happy expression looks like it might have been part of a set of Chinese zodiac animals. Its kneeling posture solves the problem of delicate, easily-broken legs, and details in blue give a lively dash to this relatively realistic animal. 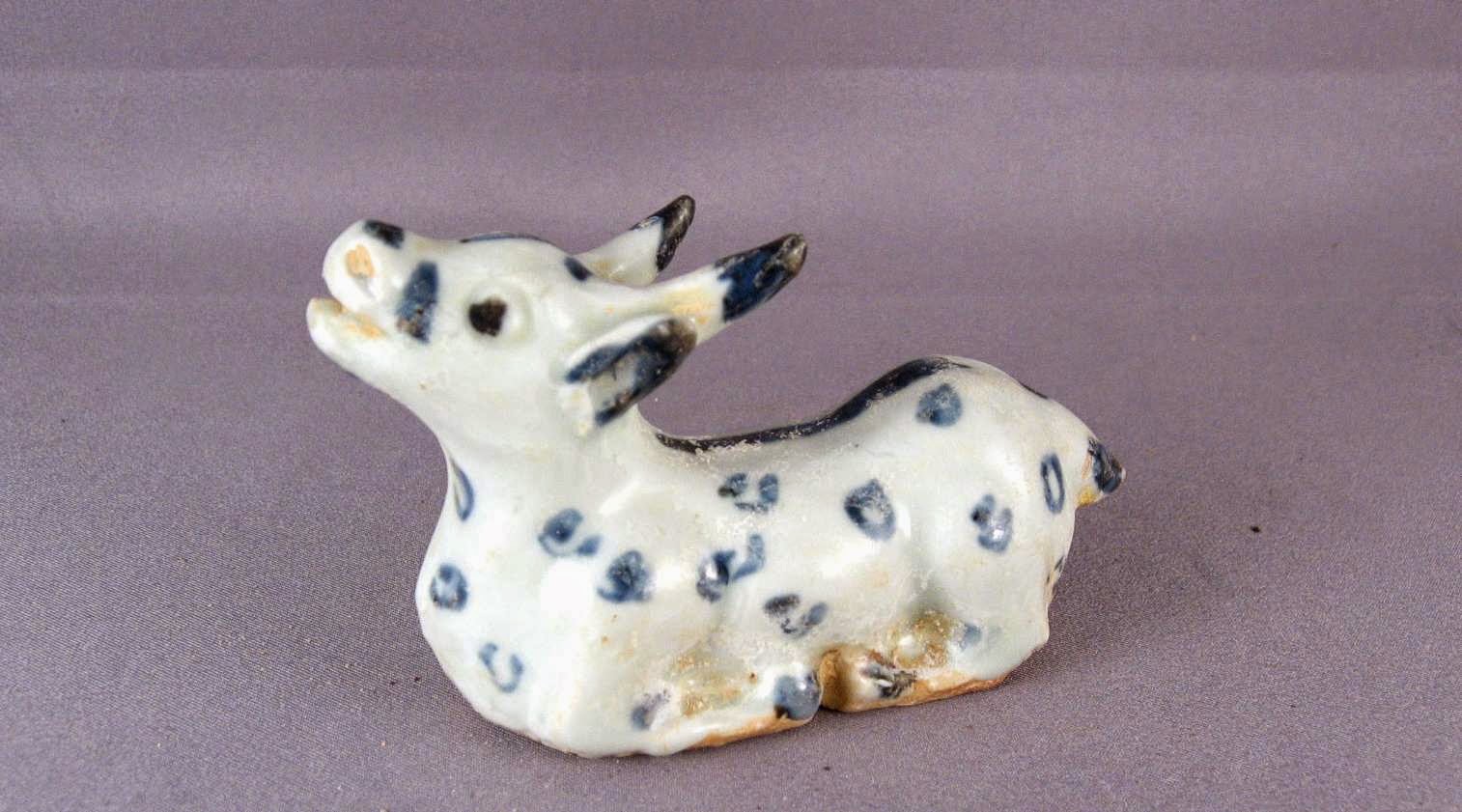 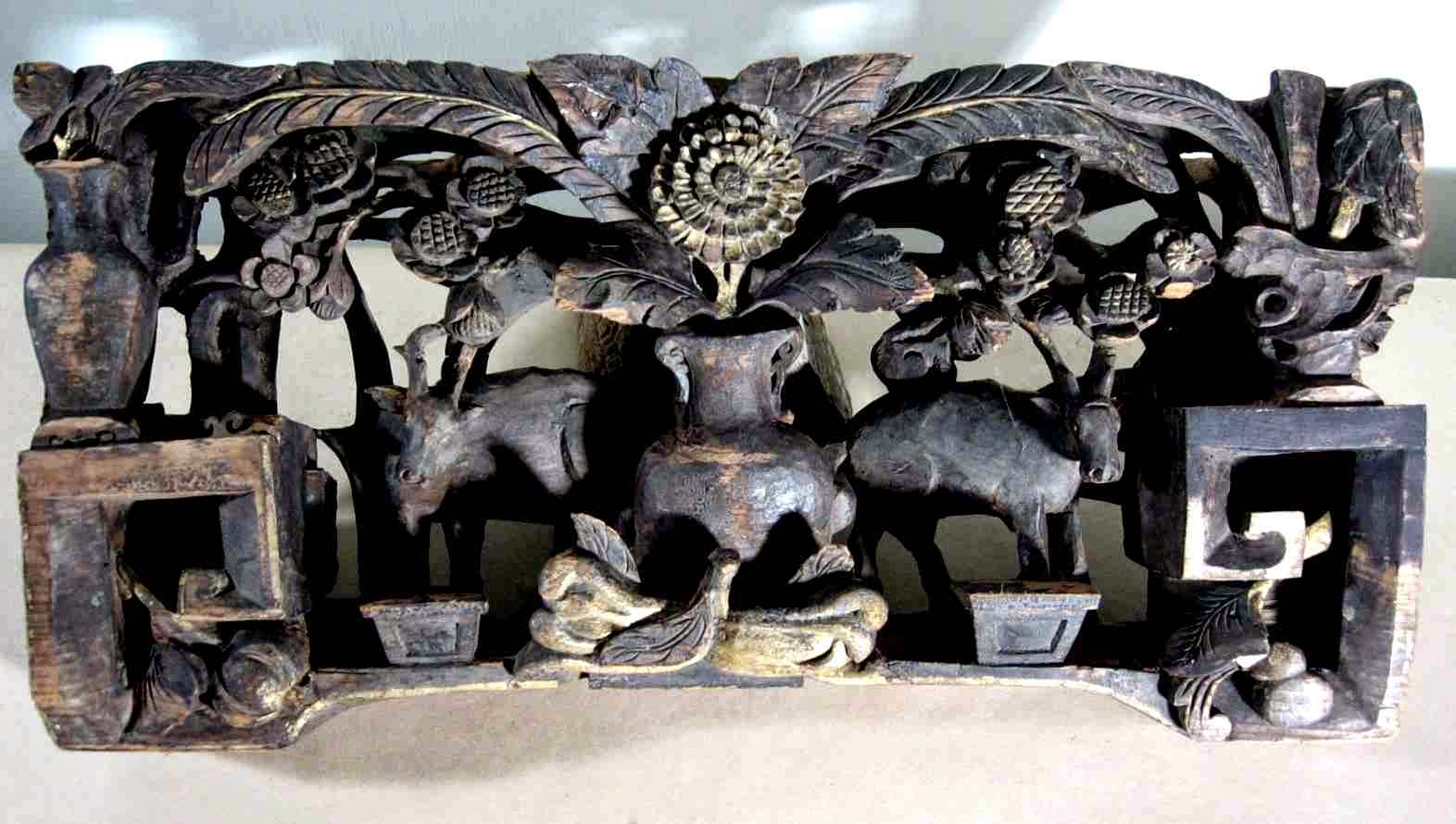 Perhaps a garden scene is intended for this very deep architectural carving of two goats among various vases, pots, fruits and flowers, including a spectacular, out-of-proportion gilded chrysanthemum in the central vase.

The corresponding bracket closely matches the first one, this time with two human figures displayed in a very similar garden.  The figure on the left appears to be playing a lute; oddly, the central vase seems to be unfinished. 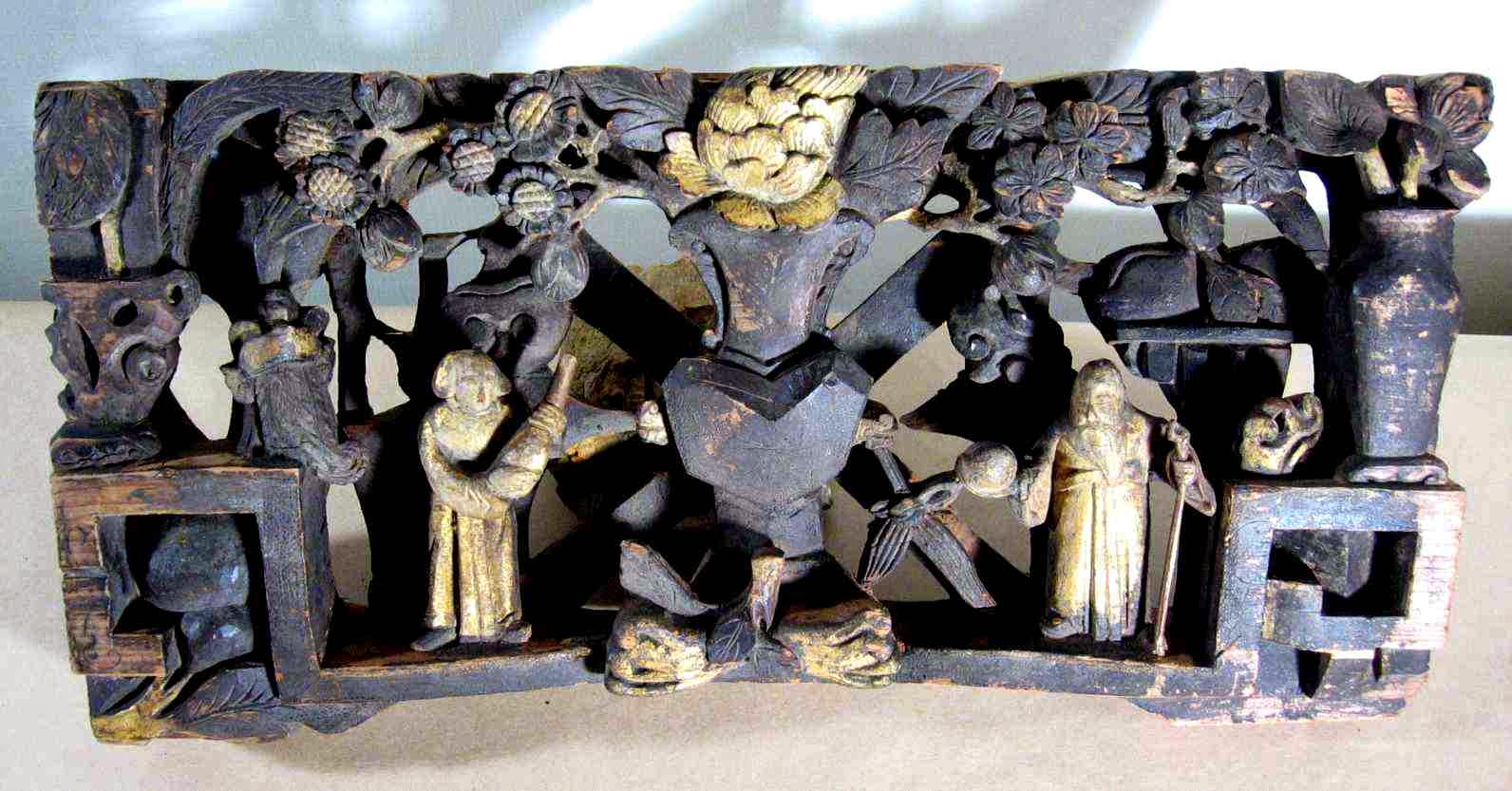 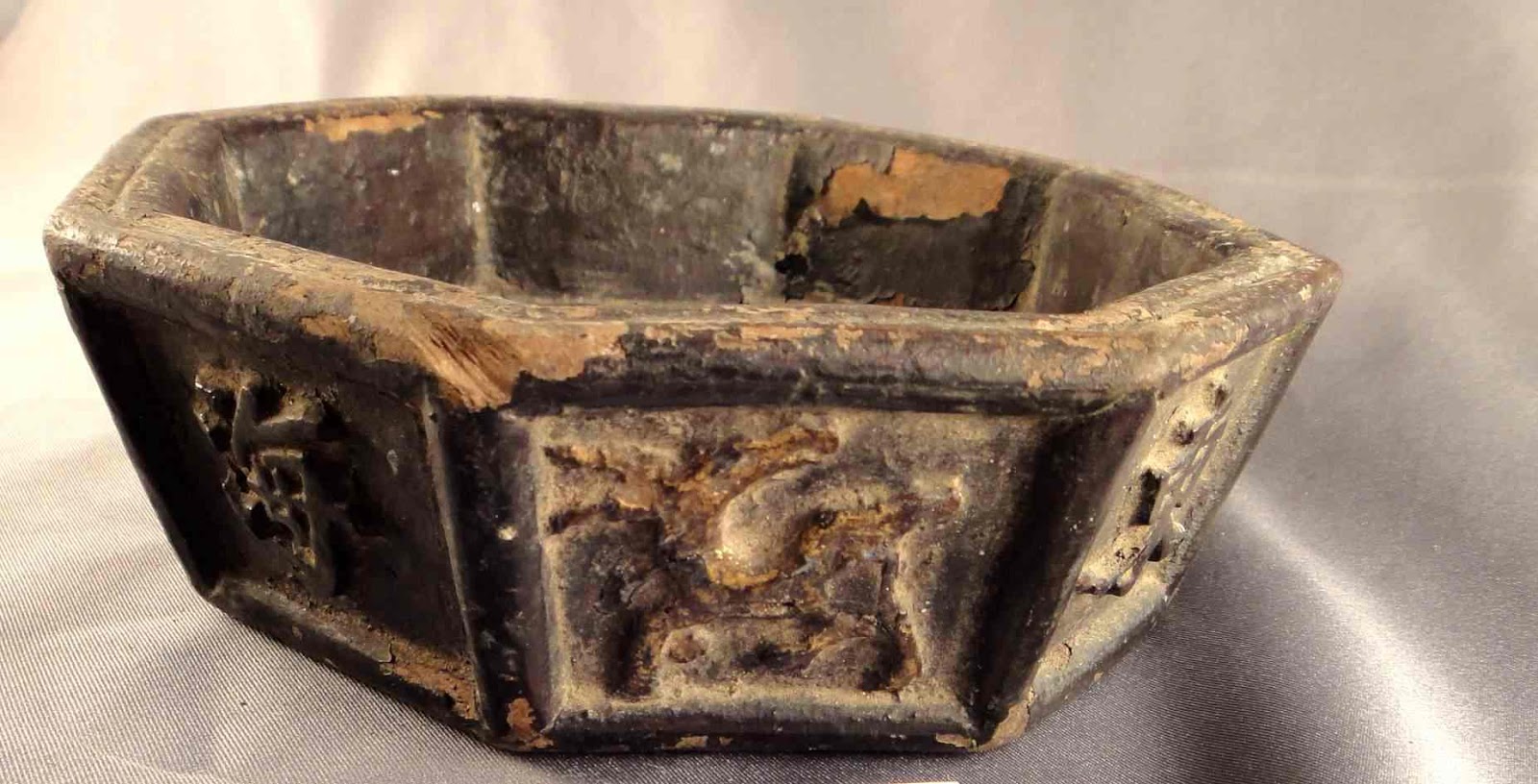 This charming small octagonal wooden bowl demonstrates some of the problems identifying animals in Chinese art. When fine details are not present, it is difficult to tell the difference between goats, deer, and other similar animals. Usually deer have branched antlers that stick straight up from the head, and are frequently depicted as spotted, while goats have unbranched horns of various shapes.  This one seems just about in between, but let me know whether you think this represents a goat, a deer, or some other animal. 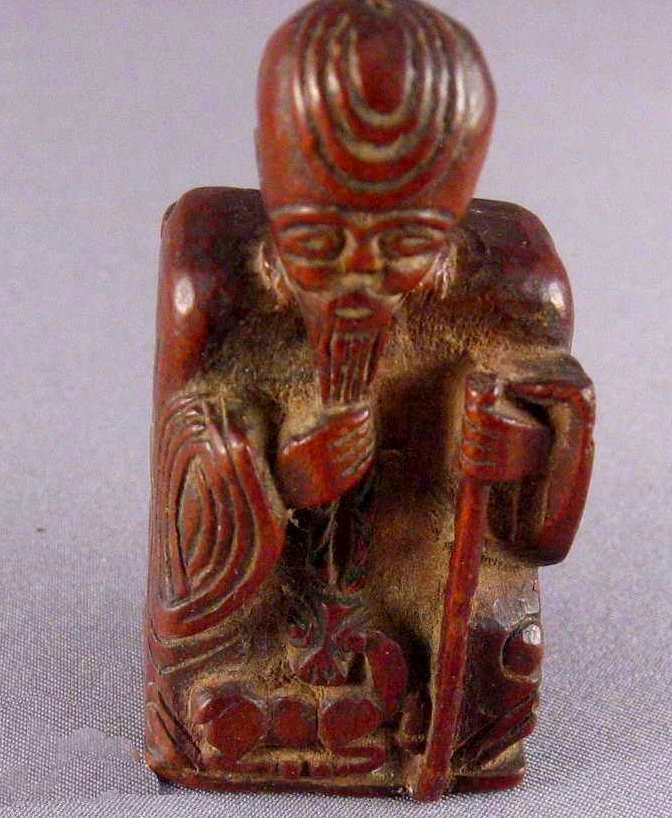 The above boxwood carving has some very unusual features. It is of a longevity god, holding a staff in one hand and his beard in the other, and at his feet is kneeling a goat. At least this really looks like a goat, with two unbranched horns close together. Yet the longevity god known as the Old Man of the South Pole is commonly depicted accompanied by a spotted deer.  In this kind of naive artwork one expects to encounter many variations, both in what was intended and the way it is depicted, so in the end the viewer has to decide upon a plausible interpretation.

The above pair of very realistic and modern goats, down to their horns, hooves and even beards, appears on a carved window. This image is from the book Dong Yang Woodcarving by Hua, De-Han. 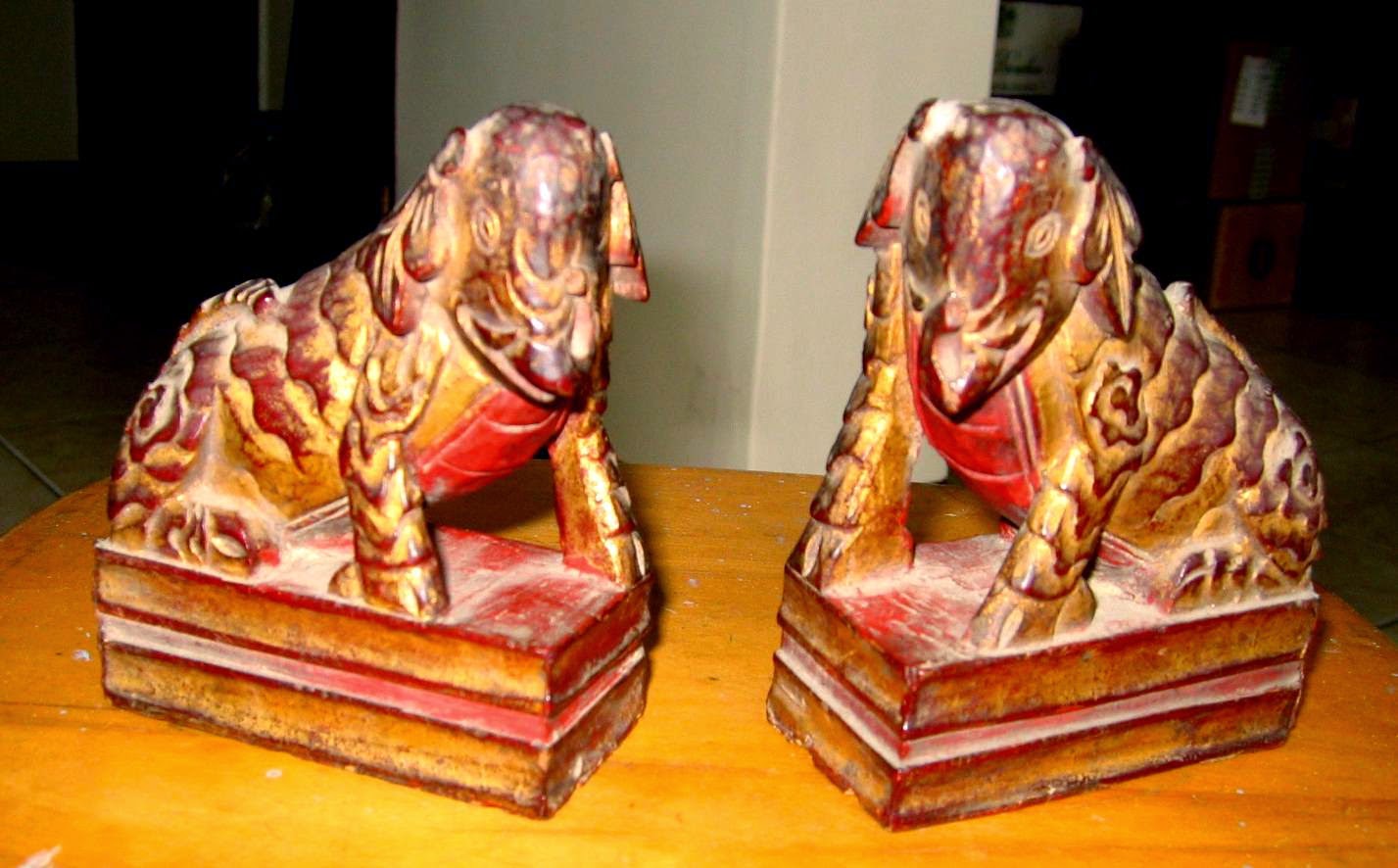 For sheep fanciers out there, this pair of once-gilded finials appears to depict sheep, but once again we are on a tangent of speculation. The cloven feet and fleecy wool are decidedly ovine, but the heads, while appropriately broad, are like nothing on this earth. They almost appear to have anteater-like snouts.

These is a sad story connected with these sheep. The last time that I moved, several boxes apparently didn't make it, and these were among the lost items. So although I still consider myself their owner, I do not currently possess them, and cannot double-check or re-photograph their features. I particularly regret their loss, since I have never seen anything to compare with them. I also admired their other-worldly charm and the quality of their carving. 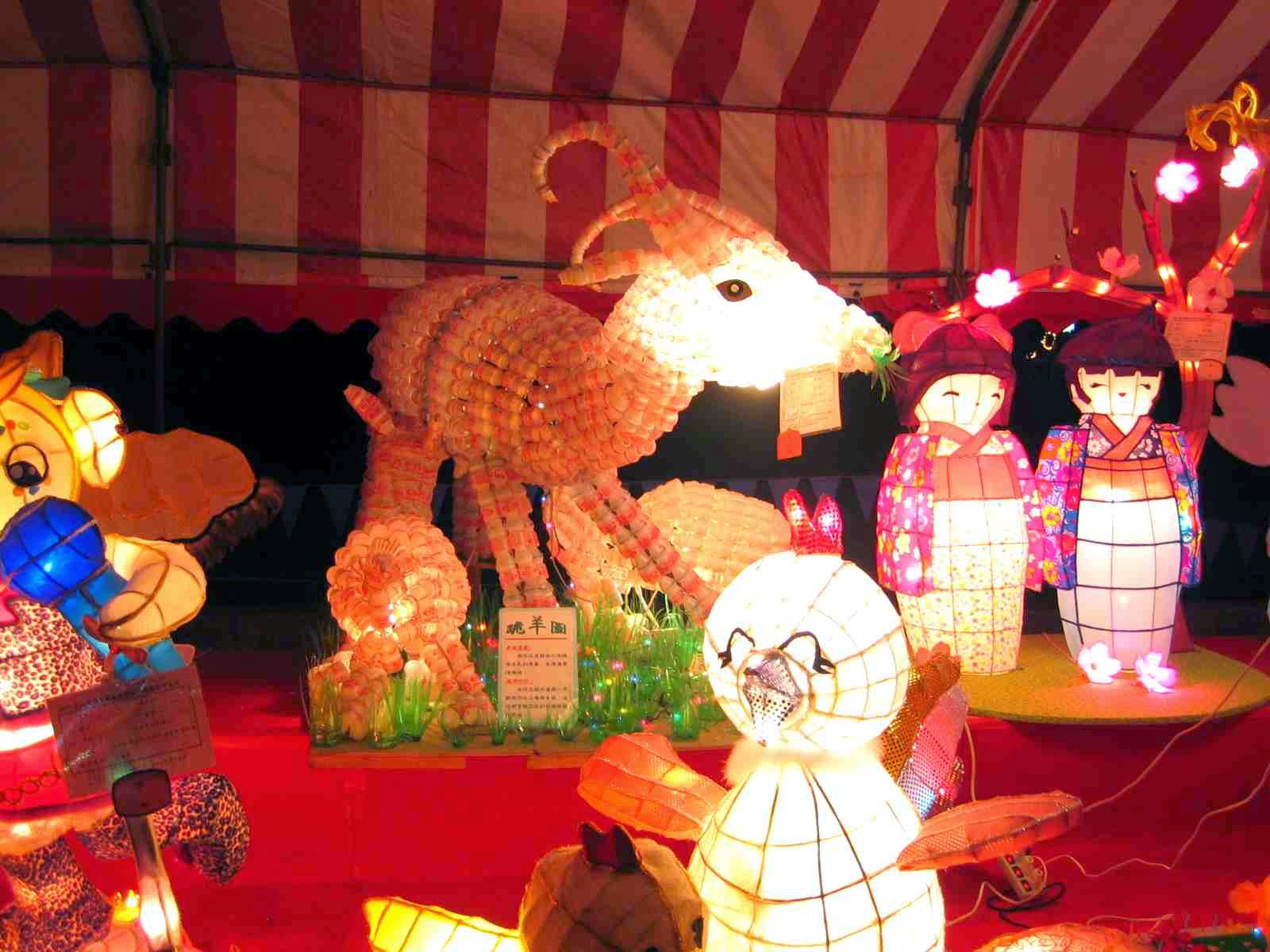 Lantern Festival this year is sure to offer innumerable goat and sheep lanterns. This goat lantern, while not from a Goat Year, shows the effect that can be achieved. It is entirely made from empty Yakult containers, a type of yogurt drink, and I consider the tuft of grass it is eating a great added touch. 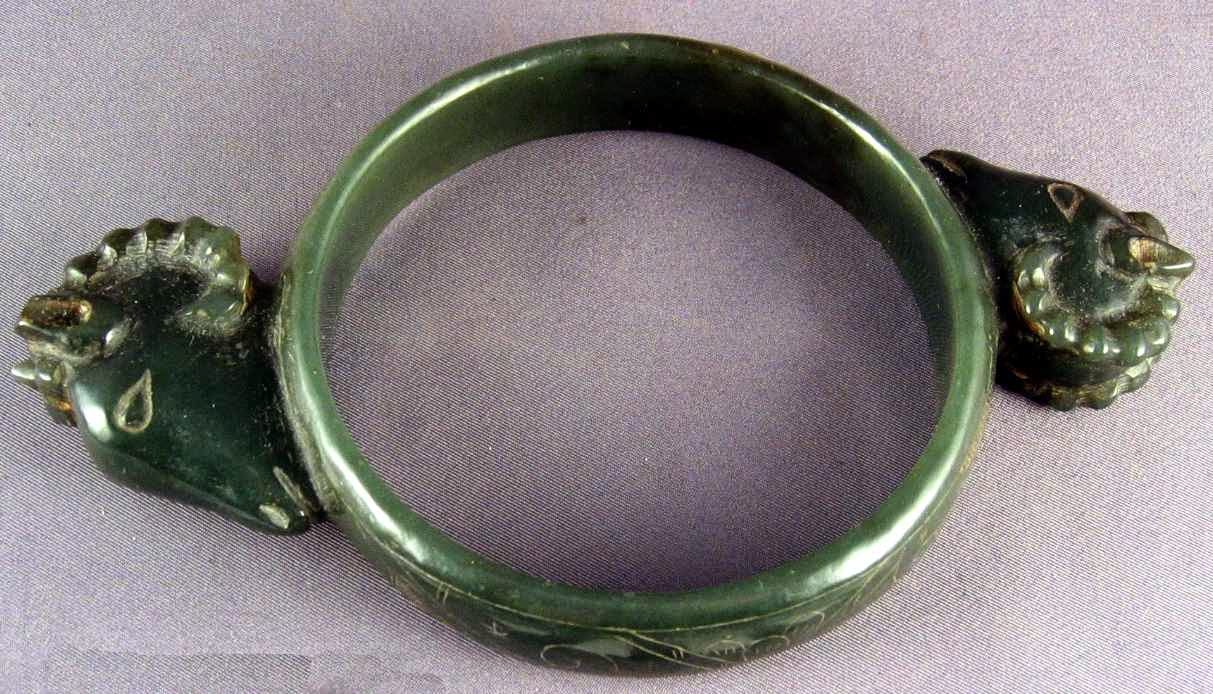 A bracelet with double ram's heads, in green stone, represents the third official possibility for the year's mascot. Although clearly not meant to deceive, it has the air of an archaic jade carving. 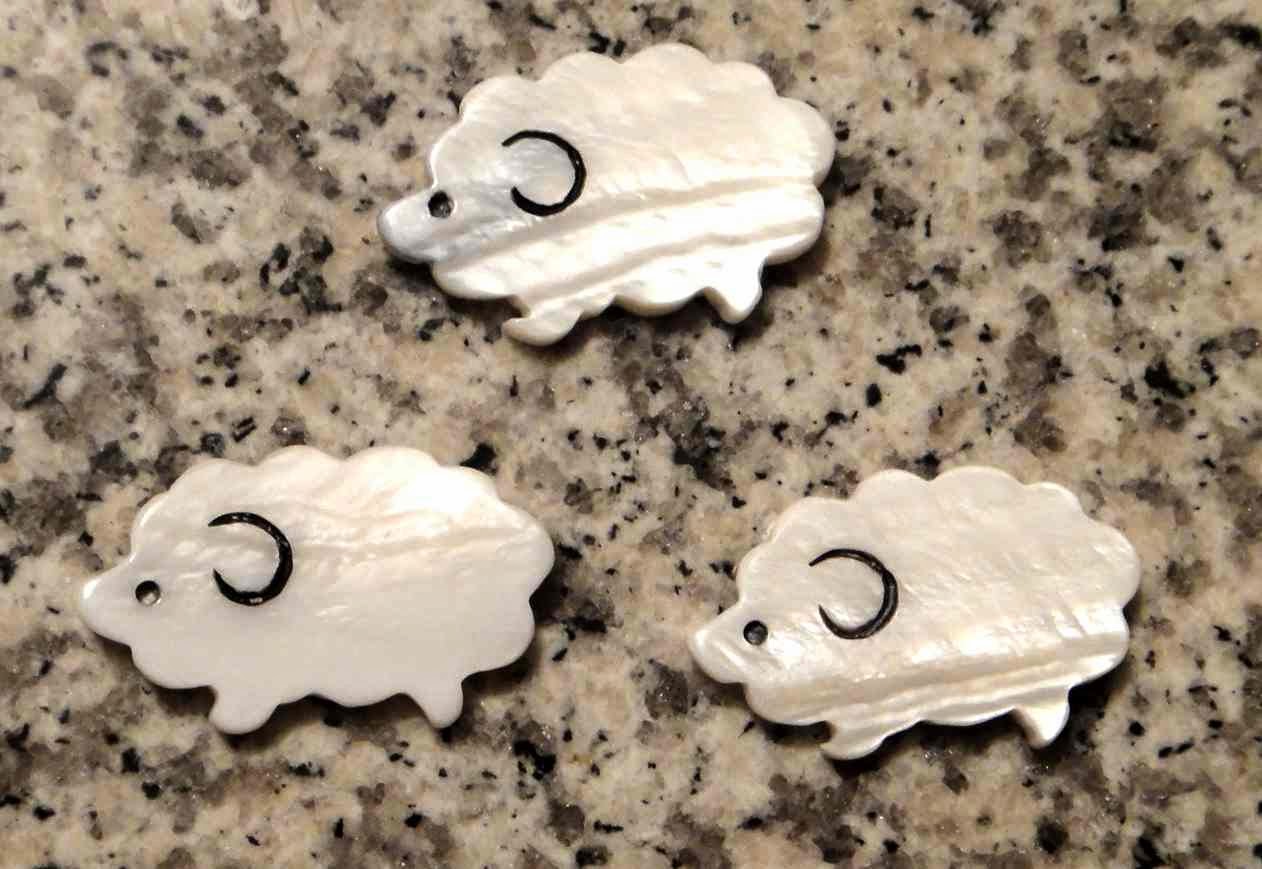 Finally, here is a modern interpretation, showing that the spirit of these animals has never left Asian art. These fluffy sheep, carved from mother-of-pearl, are actually chopstick rests that I recently found in a kitchenware store.

I hope that you are now in the mood to celebrate Goat Year. There are plenty of realistic and unequivocal portrayals in the goat-sheep-ram continuum, but as always seems to happen in Chinese art, one soon runs into gray areas. The only way to settle the issue is to let me wish you all:  “Happy Year of the Goat, Sheep, Ram, possibly Deer, or any animal, real or mythical, that even vaguely resembles them.”

All photographs by the author, except as noted.