In the early 1990’s, I moved to Moreland Hills, a suburb of Cleveland, Ohio. The comfortable house I rented on Hemlock Lane had been empty for a couple of years since the previous owner had died. A few days after I had settled in, a loud alarm sounded, and within minutes, emergency vehicles of every description were in my driveway, and a huge firetruck was on the street, all with lights flashing.

The policemen who came to my door said that a fire alarm had gone off. Apparently, the former owner had a security system, and it had malfunctioned. I told them not to worry, but they said they had to check out the house anyway, just in case. Some of them went to the basement or around the main floor.  A policeman started up the stairs to the attic, but when I told him I could turn on the light switch for him, he said no thanks because he had a flashlight.

Within seconds I heard a loud scream coming from the attic!

I had never heard a policeman scream before, but I had forgotten that among the things we had put into the attic was our copious supply of Halloween decorations, especially a huge five or six foot rubber spider that had been placed directly at the top of the stairs: In this brightly lit photo, the spider seems rather friendly, but suddenly coming across him in that dim attic, lit only by a flashlight, must have been quite a shock. He probably had been focusing the beam downward on the steps for the ascent, then suddenly seen/felt the presence of this huge creature, which must have looked more realistic in the dim light. I should mention that the house was in a wooded area with many creatures that might possibly have entered an attic.

How to Decorate for Halloween:

That house seemed to be made for parties and entertainment. In addition to a large kitchen, there was a huge combined living room-dining room. I started an annual tradition of large Halloween parties, splitting it into two parties, one more for friends and one more for family. 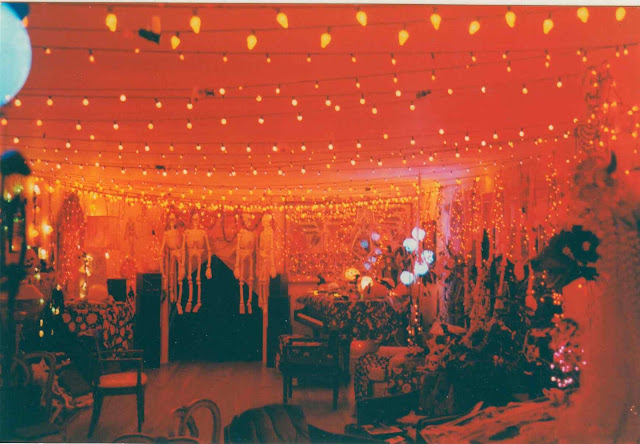 One year when I tried to count, there were at least 125 people at the big party, and 50 people at the “little” one. There was so much to put up that I always had a pre-Halloween decorating party for the core group—at the end there were about 50 boxes of decorations, not including large plastic skeletons, etc. Some people draped large swags of lights and ribbons around the room, while others concentrated on special vignettes to be placed on tables or in odd corners. 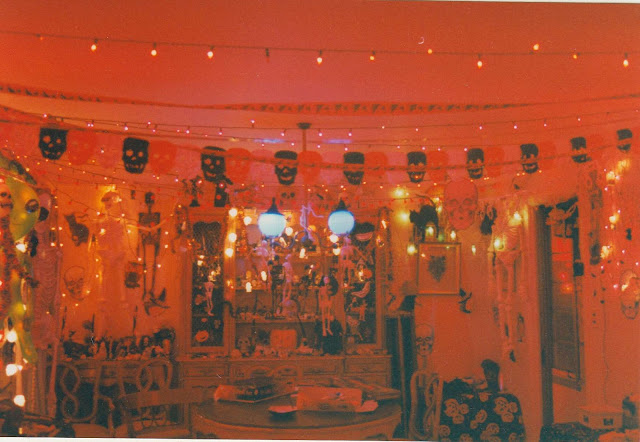 The parties were tremendous fun. We all crowded in, and there was overflow room in the basement (also decorated) and on the back porch (also decorated). We had great food and live entertainment, all provided by the guests. An odd thing: almost no alcohol was consumed—perhaps three cans by the whole crowd. Some people had brought beer or wine as a contribution, but almost all of it I had to dispose of later. 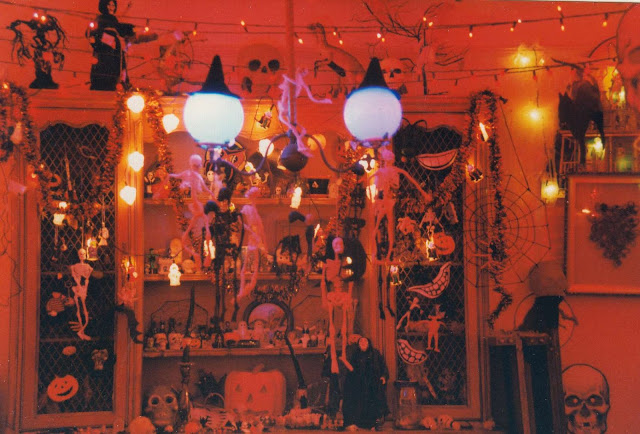 Unfortunately, I do not like to post photos of people on the blog, but I did take some photos of the empty rooms before the party started. Regular light bulbs were removed (or at least turned off), all the illumination coming from multiple strings of orange lights. In fact, there were so many light strings connected to each other that I was surprised that a fuse never blow or the house never burned down. 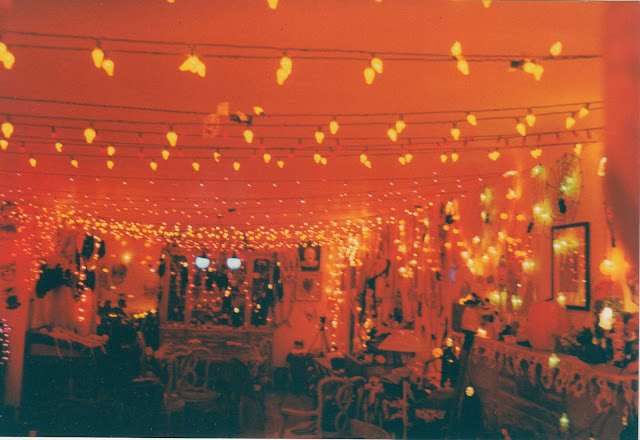 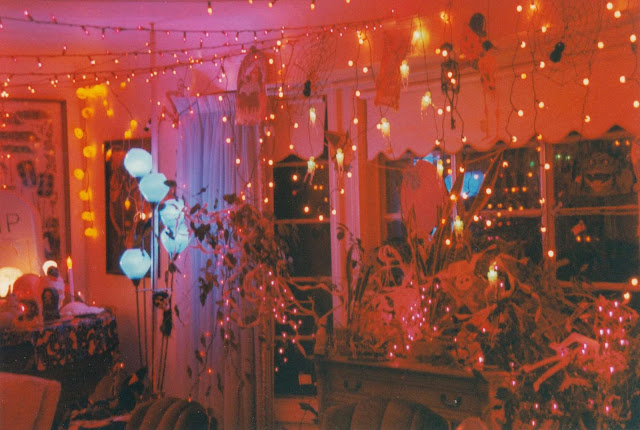 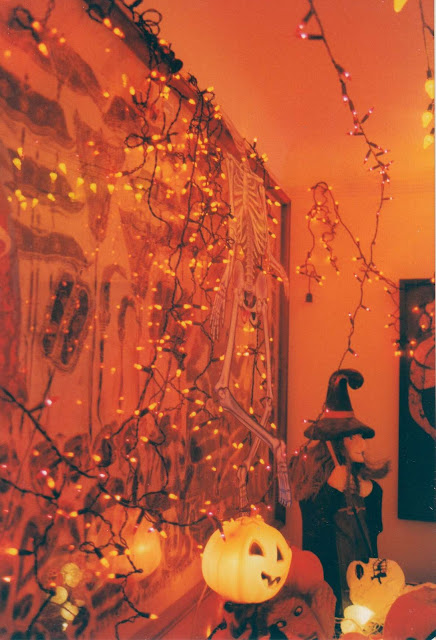 The Ghost in the Attic:

Although the policeman quickly recovered from his scare on that early visit, and the ghosts in the above photos are made of paper or plastic, my house on Hemlock Lane was in fact haunted.  When I moved in, the house was empty except for an old locked hope chest placed against the chimney in the large attic. The current owner explained that there was no key for it, so they had never seen inside it.

As we got used to living in the house, a curious phenomenon emerged. At night, slow, plodding footsteps were often heard coming from the attic. These were not the scurrying sounds of a raccoon or squirrel that might have gotten in, or the ordinary creaking of a house, but very human in quality, heavy and steady.

We started joking that perhaps the old owner had done away with his wife, and it was her body in the locked hope chest (shaped like a small coffin) who was making these nightly excursions. We even greeted her (“How are you, Mrs. C.?”) when we passed the chest, hoping to propitiate its occupant.

These sounds lasted the whole decade I lived in the house, and everyone who stayed overnight heard them. My friend Hiro was especially horrified/fascinated, and wanted to break open the chest, but I told him I could not do that. One day near the end of my tenure there, however, the current owner gave me permission to open the chest if I could.

Breaking the lock or chest, while it might have been dramatic, was not necessary. I have a variety of antique keys accumulated over the years, including a large ring of old cabinet keys. The next time Hiro came over, we tried the keys one at a time. Eventually one key fit perfectly, and the lock clicked open.

Instead of jewels, skeletons, and gleaming coins, we were greeted by the sight of green cloth. The trunk was filled with old greenish-gray curtains. And not nice curtains, either. They looked like they had come out of a motel from the 1940’s. We unpacked these, but there was little else in the chest; at the bottom were some old-fashioned bathing suits of the kind worn in the 1920’s.

I’m not really sure whether or not the ghost was vanquished by this act. The next couple of months before I moved out were unusually hectic, and I can’t recall whether or not I heard the footsteps again.

Did you ever live in a house that seemed (or was) haunted? Did you find the explanation, or did it remain a mystery? I end this post with one final view of my old house from the outside front—the neighbors must all have thought it was on fire! 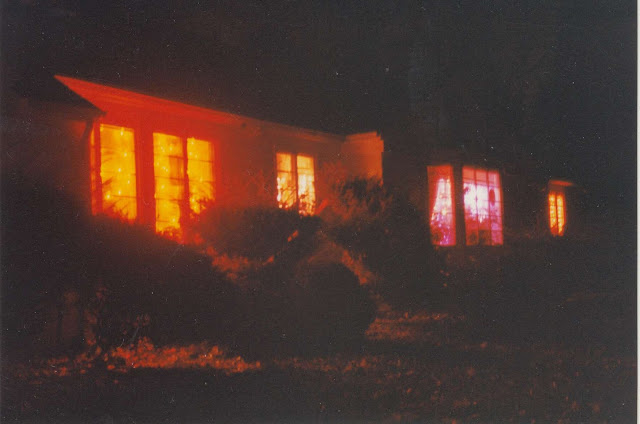 All photos taken by and property of the author.
Posted by Parnassus at 12:50 PM 28 comments: