I confess that I have no manual skills, and that all handcrafts, including painting, sculpture, and needlework, are mysteries to me, bordering on black magic. These skills are evident to a remarkable degree in Chinese headbands, sometimes called mei-lei (眉勒). Worn on top of the forehead to keep back the hair, mei-lei were often very colorful and well-decorated, sometimes embroidered with tiny glass beads. Although these are not my usual type of collectible, I couldn’t resist their intricate, colorful designs. 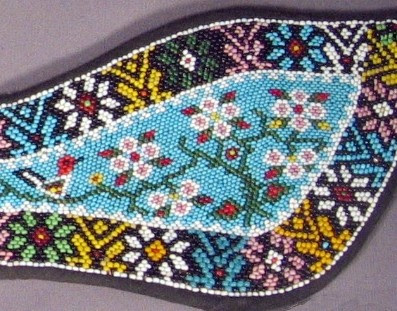 The way the beads are made into pictures is reminiscent of micro-mosaic work, the kind that was a staple for souvenirs from 19th-Century Grand Tours of Greece and Italy. The beading as a rule is considerably more stylized, without fine shading effects.

Here is the entire piece from the first close-up. This brightly-colored headband is very well designed and executed. The black background in the flowered border seems to give it an exotic quality, and the blue of the center section is strong enough not to seem washed-out by contrast. While the flowers in the border are stylized, those in the center panel are portrayed as growing naturally and luxuriously, and the red-headed birds add a charming touch. Unfortunately, in the very center there should have been a jewel which is now missing, but the two mother-of-pearl buttons at either end for securing the headband are still present.
=============================================================

This second mei-lei has opposite tonalities, with a white border and a dark center. Like the preceding one, the outer flowers are stylized while the inner ones meander, attached to their stems. There are remnants of the black strings which once tied it into the rest of the headdress. Luckily, this example still retains it center glass jewel, a large ‘emerald’ surrounded by ‘rubies’ and ‘diamonds’. I apologize that the jewel was not photographed very well; however, the picture demonstrated how these headbands are not flat, but have a hump in the middle to enhance the shape when worn, and to help display the jewel. 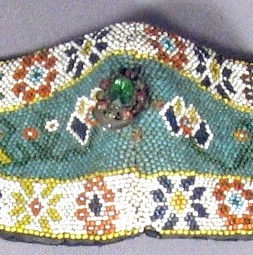 This final example is more delicately colored, with a gray-green center surrounded by a white border. The border incorporates the Chinese character called double-happiness (囍), indicating that this was probably made for a wedding, or as a wedding present. Another charming detail in the border is that for each pair of birds, one is offering a flower to the other, who is accepting it. Just don’t ask me which are male or female!


In the central part, there is a design of flowers with a bat hovering above. (Remember that in Chinese culture, bats symbolize good luck.) An oddity here is that the two halves are not symmetrical, and furthermore seem to have been executed by two different hands. The sizes and shapes of the bats are different. Also, on the right side, the bat is flying over vaguely heart-shaped flowers or fruits, but on the left side, the fruits look distinctly like pomegranates.


In addition to two white glass buttons for attachment, this one still retains its center glass jewel, a large white ‘diamond’, surrounded by ‘rubies’ and ‘emeralds’. 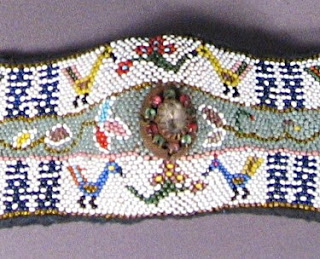 Parthenon brooch photo from Wikipedia, all others belong to author.
Posted by Parnassus at 10:42 AM 14 comments: