True Class Shows Itself in Taiwan

Reggie Darling has given us a set of civilized rules guaranteed to restore decorum to the experience of dining in fine restaurants. Yet he fails to give us a simple way of finding those restaurants in the first place. Luckily, in Taiwan the government has taken the mystery out of this difficulty by posting the following sign in Taipei's Main Station. What could be easier?

Fair Haven, Connecticut is the old riverfront area of the city of New Haven, near the Mill and Quinnipiac rivers. In the early days a lot of money was made there in the oyster business. Today there are old industrial areas near the rivers, and lots of old homes in the adjacent streets. This long-abandoned home on East Grand Avenue had a curious history.

According to the lawyer who gave me permission to enter the building, the old owner bequeathed the property to his two children by dividing the long, narrow lot right through the center of the house. Unfortunately, the heirs quarreled, and neither would agree to sell to the other, or to co-develop the property, so the house lay there decaying for most of the twentieth century.

By the time my college roommate and I went there the building was derelict; almost every single pane of window glass was broken. This early 19th-century home was rather large—probably one of the largest built in Fair Haven, although it was seemingly built as a double. Brick walls created the tall, raised basement, and at one time stairs led to an entry porch. Here is another home in Fair Haven built on the same general plan, although with more insistent Greek Revival trappings:

We entered though a basement window at the back, and immediately fell though the floor. Fortunately, the wooden boards were only a few inches above the true dirt floor beneath, so there were no casualties. However, the floor, which was rotten everywhere, was a cause for concern, as was the condition of the foundation bricks: 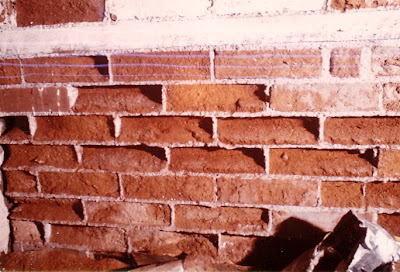 Usually it is the mortar that falls out from between the bricks, which must then be repaired by repointing. Here the bricks themselves have disintegrated, leaving behind a honeycomb of intact mortar.  At this point, considering that these bricks were also holding up the structure, we decided to leave the house and go to a nearby fire station, explaining that we were photographing the home and if we didn’t report back by such a time, they should come to look for us.

Early homes often had their kitchens in the basement, as evidenced here by a large fireplace equipped with a beehive oven. Often these ovens are set into a wall, so the backs cannot be seen, but it this case the back was exposed, giving us a rare glimpse at this attractive spiraling masonry work:

We cautiously ascended to the main floor (the stairs were broken and rotting), to find a curious hodge-podge of rooms; it wasn’t exactly one house, but it wasn’t exactly a double, either. Although there was evidence of some early woodwork and remnants of hand-blocked wallpaper, there were also cheap moldings that indicated that perhaps the dwelling had been cut up into a rooming house, not an unusual fate for old buildings.

Climbing another questionable staircase to the second floor, we encountered a hallway floor riddled with large holes that allowed us to see through to the first floor below. One of the bedrooms still gives me nightmares. Aside from the overwhelming water damage and the incredible dreariness, the cheap, institutional-looking iron bed is another sign that this could have been a rooming house. To be fair, there were some very attractive features in the house, but we never got a chance to photograph them.


We then mounted the final stairs to the attic, which apparently had never been finished and was just one large space, although it was fully floored. We started walking toward the chimney, when a strange thing happened—the whole floor under us started to move, slanting as though the very structure of the house were giving way.

We looked at each other, then gingerly but quickly made our way out . The next time I was in Fair Haven, the house was gone. I never found out if it fell, or if it was torn down as a safety concern. I have never seen an old house in such bad condition as this one. Often owners of historic buildings will claim that a reasonably sound house cannot be saved because they want to develop the property, but this house was truly beyond repair.