This post is a tribute to Mark Ruffner’s interest in Greek Key designs. These usually squared-off patterns in countless variations have been used since antiquity to create borders and frames in almost every kind of design.

Since moving to Taiwan, I have noticed that these patterns are also ubiquitous in Chinese art.  Here then is a brief look at their appearance on small household articles, ignoring for the present their role in ancient Chinese art and architecture.

While the Greek designs were inspired by a ‘meandering’ river, the Chinese meanders seem to have additional sources and versions, including foliage and natural growth, stylized clouds and animals, and various kinds of waves, lattice-work, cartouches, and paneling.

I have a small collection of Chinese wooden trays, and this simple red and black lacquer one, with its key-design sides highlighted by gilding, is one of the handsomest I have seen. 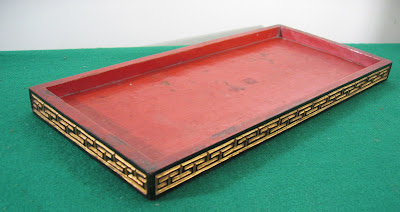 This platform uses the same color scheme to different effect, the black top set off by a narrow band of red, the gilt fretwork base employing different sizes and shapes of links for variety. 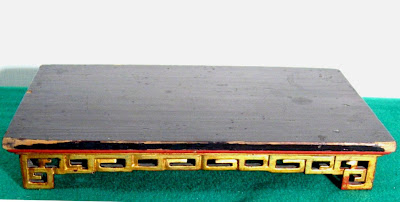 Wooden lion finials like these are often found on pieces of furniture, especially those of some religious significance, such as a household shrine. One lion is playing with a ball, the other (presumably a female) is protecting a child, but both are resting on key-bordered plinths. 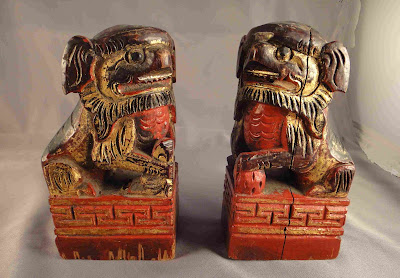 The keys in this bat panel are formed of individual links, not joined, and are interspersed with flowers and bosses. With its four lucky bats surrounding a central design, this also came from a piece of furniture, most likely a bed. 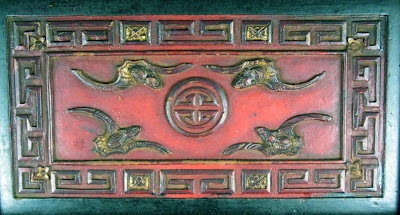 Although it has some condition issues, this document box is interesting because it has Mongolian writing on the top and bottom. The sides were left over to be decorated with classic meander patterns. Notice that the top is framed with fretwork elements which create a much freer type of border. 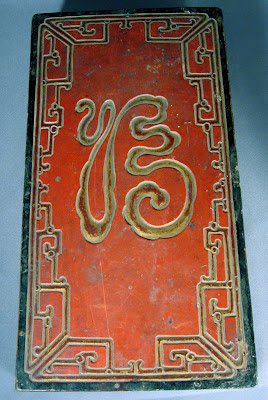 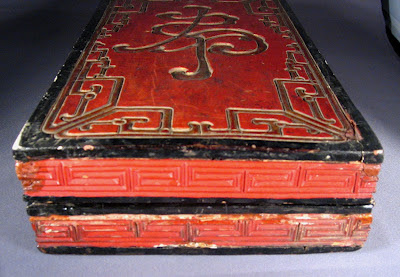 Here a key-work  border is used to enclose a panel of text in this small wooden box. 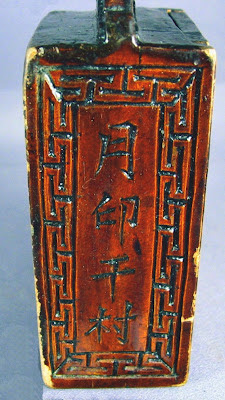 A statue of Guan Yin is set off with this wooden case, enlivened by much gilding and surrounded by the squared key border. (Note, I haven't decided yet whether to clean the ‘patina’ off the glass cover--I should have removed it for the photo.) 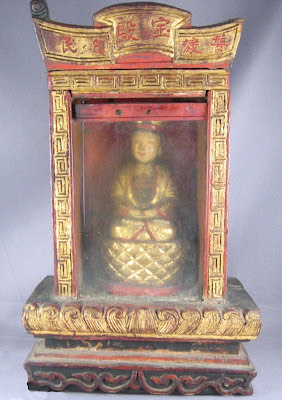 A pewter cosmetics box is somewhat crudely decorated by stamping; the craftsman who made it obviously cared little about the close fitting of the corners in the key-work.

These ceramic pillows were made in large quantities, although recently I have seen a lot of fakes. This blue and white example features a pair of playful lions constrained by a severely classical border. 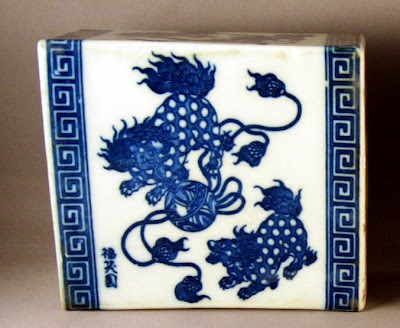 In addition to narrow borders, the same type of fretwork patterns could be made to cover large areas, and were often used as window or background designs. I hope to return to these is a later post, but here is an example of background fretwork in a medicine tin: 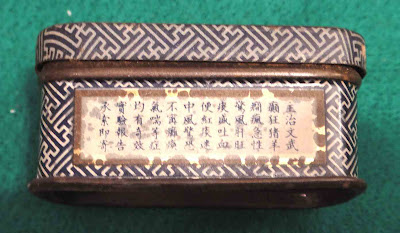 Finally,  although this is not a geometric Greek Key type, I couldn’t resist ending with a more naturalistic border consisting of a peach branch with gilded leaves and fruit, which could be extended indefinitely using the rules that created the formal meander patterns.

This brief look at traditional meander patterns barely scratches the surface, and doesn’t even begin to explore their history and symbolism.  Although the ones presented here are only a tiny sampling of the variety available, let me know whether you find any of these key borders particularly attractive.

(All photos property of the author.)
Posted by Parnassus at 12:20 PM